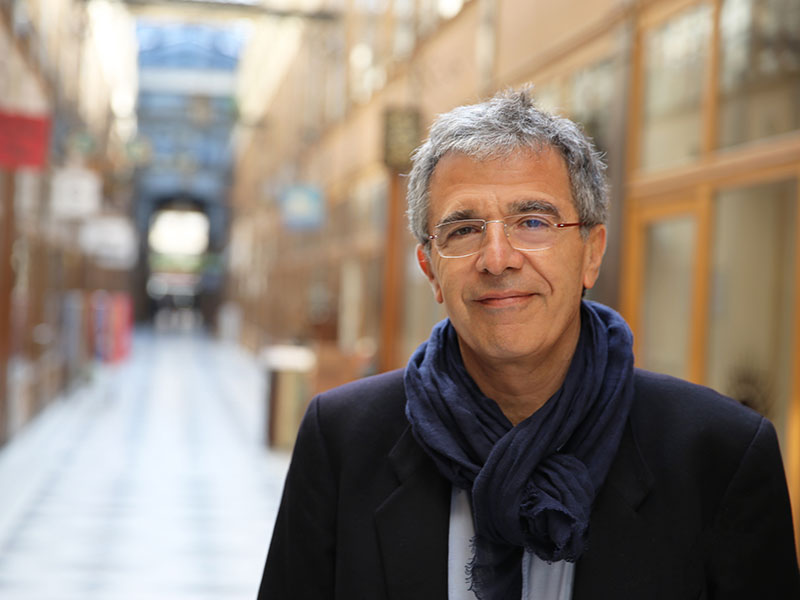 What’s remarkable about Didier Rappaport is the success he has found – and the industry firsts he has helped introduce – across a number of different sectors. Image © Happn
Profiles

The world of dating has changed. There was a time when meeting the love of your life would invariably occur in the places you frequented most (work, university, etc.) or through introductions made by friends and family members playing the role of Cupid. Yes, such meetings do still happen, but they are becoming mere shadows in modern-day courtship. Indeed, according to the Pew Research Centre, 59 percent of adults think matchmaking websites are a good way to meet people. Today, online dating reigns.

Grabbing the most attention in this space is Tinder, a location-based search app that allows users to match if they both like one another when flicking through a vast database of local users. While some advocates point to the platform’s timesaving benefits, detractors argue its ‘swipe right’ approach to matchmaking epitomises the disconnected nature of modern social interaction. Regardless, it has become the staple of online dating, with many competitors adopting a similar model or developing sophisticated algorithms to connect potential partners with corresponding interests.

Happn attempts to reconcile the digital world with the physical one, using modern tools to capture some old-school magic

One player, however, has taken the concept in an entirely new – yet familiar – direction. Happn, a dating app based on the premise of reprising chance meetings, is the product of serial tech entrepreneur Didier Rappaport. And despite entering an already saturated market, the app’s approach has seen it explode onto the global stage since launching in 2014. “We now have 60 million users around the world and Happn is the number-two most downloaded dating app worldwide,” Rappaport told European CEO.

Love at first site
What’s remarkable about Rappaport is the success he has found – and the industry firsts he has helped introduce – across a number of different sectors. After studying economics at the University of Bordeaux, Rappaport went into the family textiles business, where he was charged with sourcing materials from Asia to be sold across Europe.

Rappaport was, however, unable to ignore an event that would forever change society: the arrival of the internet. “I guess I am a very curious man in general and, when I started in the digital business, it was something entirely new and unknown,” he said. “I felt there was really something to build and I knew it would become something big in the future.”

Inspired, Rappaport created the world’s first B2B marketplace for textiles, Textileeguide, in 1998. Not one to sit still, Rappaport would establish SourcesIT, a site specialising in online services for IT professionals, just four years later. Then came the pièce de résistance: in 2005, Rappaport co-founded Dailymotion, the second-most popular video-sharing website in the world today.

“With more experience and many more ideas, I was eager to move on and build something new… [Something] useful to everyone in the world, yet impossible at the time: getting closer to your relatives and friends [who live] miles away by sharing your videos online in two clicks,” Rappaport said.

“This [is] how we came up with the idea of Dailymotion… We were French and the very first ones to launch such a platform (actually three weeks before the Americans and YouTube), which became hugely used on a daily basis and all over the world.” Rappaport stayed on as COO at Dailymotion until 2008, when he co-founded Nomao, a personalised social network based on geolocation technology.

When asked what draws him to the digital world, Rappaport said: “I strongly believe that the evolution of social behaviour and customs… have influenced and are influencing technology. So I guess, maybe, what appeals so much to me in the digital world is that digital evolutions are supposed to provide answers to existing issues.” Right place, right time
This curiosity about social behaviour – and the effects of technology upon it – helps to explain Rappaport’s passion for this current undertaking. But while some believe the prevalence of smartphones and the internet presents social obstacles, Rappaport sees solutions in the very same technology.

“It has never been so difficult to connect with people in real life than today,” Rappaport told European CEO. “Most of the existing dating services are very virtual and often very time-consuming – or basically work like a ‘human online shop’. This is not ethical, and even less respectful of the users who are, let’s never forget, human beings.”

Happn uses ‘hyper-location’ technology to proffer matches when users have crossed paths in real life. And this, in Rappaport’s opinion, is the app’s key differentiator: “We believe that the magic of love is when two people meet thanks to little coincidences, and when an unpredictable alchemy makes them connect and really fit together.”

In a bid to further prompt such little coincidences, the start-up introduced the Happn Map in June 2018. Once opened, users simply tap on a location they have visited in the past week and are presented with a list of other users who have been at the same place in the same time period. The idea is that it provides individuals with a second chance to connect with people they may have missed, whether due to hesitation or circumstance – a point of frustration we have all experienced at one point or another.

Aside from assisting in the serendipitous nature of finding love, there’s logic to using location to match individuals. “If you live in the same location you will probably have similar life habits; working in a similar workplace will possibly mean your jobs are quite similar as well,” Rappaport said. “Time and space together are a double filter which very often proves you have something in common – a connection.” Perhaps this ethos is what sets Happn apart from others in the online dating space. The app attempts to reconcile the digital world with the physical one, using modern tools to capture some old-school magic. Whether you prefer to call it fate or chance, there is definitely something special about catching someone’s eye and falling into a tête-à-tête that feels oddly natural.

“Happn’s essence is romantically modern, and our whole purpose and technology are [designed] to bridge your digital and… real life,” Rappaport said. “There’s only one world – the real one – and our app is just a tool to help you connect with new people and go back to real life with them.”

Making connections
Like many apps, Happn adopts a ‘freemium’ business model: while consumers can use the service for free, premium features are available for purchase, both through pay-per-use transactions and via a subscription.

Happn’s premium service allows users to send up to 10 notifications – known as ‘hellos’ – per day and shows them a list of people that have ‘liked’ them. It also provides an ‘invisible mode’, presenting users with the chance to schedule times of the day when they do not want their profile to be visible to others, and a ‘mystery feature’ that enables users to hide some of their personal information. Advertisements are also disabled.

Given the premise of Happn and its business model, critical mass is essential. As such, it tends to work best in cities. To attract a greater number of users upon market entry, Rappaport focuses on precision marketing: “Our marketing moves are always localised to make sure the app and messages are the most relevant to each country and culture.

“Our [headquarters are] in Paris, but we work closely with local contacts and market representatives, who regularly share insights with our team here. And the team includes members of different nationalities, who very often travel to their country to feel what’s happening [in] the field. So when launching in a new city, our campaigns… are so native and local that they [go] viral quite quickly, since people identify themselves very easily.”

Marketing this way must be continuous – if the app is ineffective, people will simply stop using it. As such, Rappaport believes it is important to attract a continuous stream of new users: “The success of our app is maybe more about always convincing new people to join than ensuring critical mass. When our users find the people they were looking for on Happn, they stop using our services – and we are glad they do so, because it means we did our job – [but] this is why we always look for new users.

While some believe the prevalence of smartphones and the internet presents social obstacles, Rappaport sees solutions in the very same technology

“But our main targets – single [people] – are always numerous, whatever their age and gender. For instance, lately we have seen more and more users over 35 join Happn, so it’s clearly becoming intergenerational.”

The app is also favoured among professionals. As opposed to the perceived ‘hook-up’ culture of some of its competitors, Happn has a more grown-up feel to it. Meeting others in similar vocations or with similar ambitions can provide the footing for a fruitful relationship. Offering people the chance to meet someone who lives in their neighbourhood, attends the same events or frequents their favourite restaurant may not necessarily be a formula for love, but such commonality can break the ice and act as a foundation for deeper connections.

The eye of the beholder
Rappaport’s success can be attributed – in part, at least – to an uncanny ability to envisage his creations on a global scale from day one. This is evidenced by the fact Happn opened in its second market just three months after launching, and its third four months after that. Today, the app is used in more than 40 countries.

“Scalability is all about making sure your product and business model are ready to be rolled out anywhere and in the shortest possible time… It obviously has to be a central matter when developing a company internationally,” Rappaport said. “A highly scalable business always appeals to international investors and business partners because it guarantees a sustainable growth.”

When asked what advice Rappaport offers to aspiring entrepreneurs, he said: “It takes confidence, strong motivation and vision. You have to be ready and eager to go all the way, and then it’s mainly about getting the help of the good people and always [being] two steps ahead. Of course, you should always pay attention to the culture and society in each country you want to go [to], just to make sure you adapt smoothly and do not force your own vision upon the local people. When you are a foreign player… it makes such a big difference when [you] know a country very well.

“Entrepreneurship is really a state of mind to me. It’s all about [being] willing to make things differently, [building] something from scratch, having a genuine taste for risks – although, experience helps you to measure them – and enough strength to carry on what you’re undertaking. Being an entrepreneur is also about handling freedom and independence.”

Given his success disrupting both new and saturated markets, Rappaport is a force to be reckoned with. He sees new opportunities, grabs them and turns them into multinational enterprises in a remarkably short time frame. From textiles to video sharing, Rappaport has made his mark. Today, he’s using his talents to help people connect in an increasingly disconnected world – and hopefully find love along the way.