From helping women advance in the workplace to tackling social inequality and climate change, Unilever Prestige CEO Vasiliki Petrou is a positive force to be reckoned with 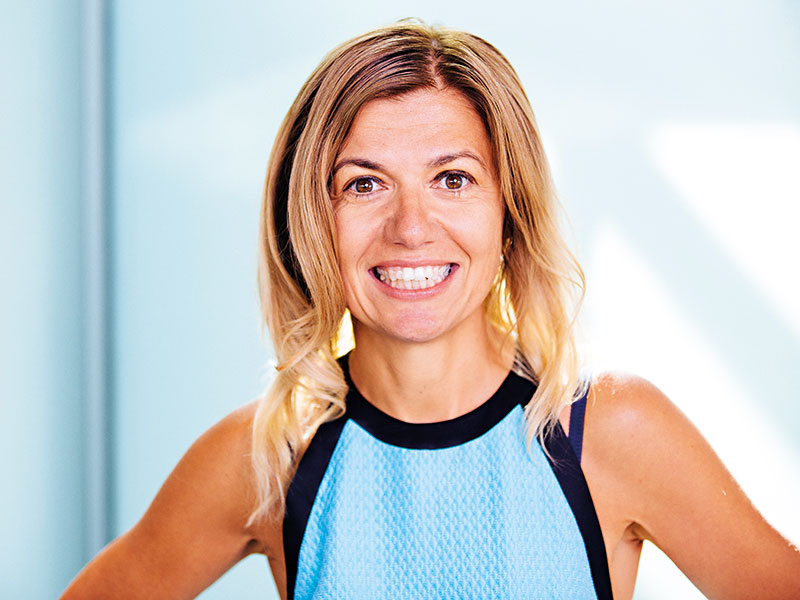 As executive vice president and group CEO of Unilever Prestige, Vasiliki Petrou is dedicated to ensuring that other women are able to follow in her footsteps
Profiles

Within the first few seconds of her interview with European CEO, Vasiliki Petrou stated: “We have to help women advance.” It’s an ideology that encapsulates her driving force in business. The indomitable Petrou has spent her 25-year-strong career ascending through the ranks of the world’s most prestigious corporate beauty companies. Now, in her lofty position as executive vice president and group CEO of Unilever Prestige, she is dedicated to ensuring that other women are able to follow in her footsteps.

Born in Greece, Petrou took her first steps into the corporate world in 1991, when she embarked upon an MBA at Columbia Business School in New York City. During her time at the prestigious institution, she was awarded a Fulbright scholarship.

After graduating, she joined Procter & Gamble (P&G) as a brand manager, first in Switzerland and then in Greece, before moving to the UK in 1999. Over the following five years, she climbed the ladder to the top, initially overseeing marketing for all of P&G’s haircare businesses in the UK, before taking responsibility for Max Factor’s billion-dollar global business.

Petrou extends her dynamic, forward-thinking approach to the workplace culture at Unilever Prestige

She left P&G in 2012 to join Unilever as vice president of its personal care department, before assuming her current role as executive vice president and group CEO of the Prestige division in 2014. This, she said, is the proudest moment of her career to date: “I have to say, as a woman, and I want to say this to encourage other women, we always second guess ourselves.

“We’re always thinking: ‘Oh, am I the right person? Why was I selected for the role?’ I think this move gave me the confidence and the faith in myself and my abilities to put myself forward, take risks, go into [uncharted] territory and create new history.”

In her mind’s eye
Petrou’s interest in beauty far predates her career in the sector. “I’ve always had a love for innovation, an appreciation of great aesthetics and a true love for what I call ‘creative genius’,” she told European CEO.

“Beauty always inspired me, mostly because it makes a big impact on how people feel about themselves. On top of this, Prestige gives me the ability to lead with a lot of new-to-the-world experiences that I believe bring new expertise to areas that were very much traditionally image-driven, so I’m excited about this new change.”

She also credits being a “very visual person” with giving her a strategic advantage in her role at Prestige. “The way my mind works, it sees patterns in seemingly disconnected fields,” she said. “So I see connections in areas that normally wouldn’t relate to each other, but I see where they converge.” Petrou cites “connected beauty” – the idea that beauty does not exist in isolation but within the context of a wider health and wellness industry – as one trend she predicted. She said: “At Unilever, the way we innovate is very much about anticipating consumers’ needs.

“Strategically, we are constantly asking ourselves, ‘Where is the world going? What is going to happen in the next five years? What solutions will people be looking for?’ I’m a big believer that we shouldn’t always be asking the consumer what they want because sometimes they don’t know; they can’t anticipate their needs. If we’re great at our jobs, we should be great in anticipating people’s needs and innovating for that.”

Strategic thinking is a key element of Petrou’s role at Prestige. The division is home to six differentiated brands, each operating independently within the context of a larger corporate framework. “Prestige is an expansion area for Unilever – it’s a huge growth opportunity,” Petrou told European CEO. “We’re really trying to pave a new model in how we manage companies, respecting their authentic DNA, respecting the founders that we partner with, and creating very new-to-the-world business models that delight the consumer.” Workplace wellness
Petrou extends her dynamic, forward-thinking approach to the workplace culture at Prestige. She’s an advocate of self-care and believes in the oxygen mask analogy: in the event of a plane crash, passengers are always advised to ensure their own masks are fitted before helping others. “It’s a very intelligent analogy because it just shows that unless you look after yourself, you can’t mentor or look after others,” Petrou explained.

She’s always on the lookout for ways to incorporate movement and meditation into the workplace. Her biggest innovation so far in 2019, she said, has been ordering treadmills for her offices, so staff can now incorporate exercise into meetings rather than sitting down for yet another hour a day.

Petrou’s also introduced walking meetings into her own schedule, telling her fellow leaders at Unilever: “Let’s take a walk around the block and discuss what we need to, because that will give us fresh air and one or two new ideas, and we’ll come back much more enriched.” She believes that staid corporate culture is in need of an update for the 21st century, which begins by prioritising the mental and physical health of employees. “Self-care and wellbeing is the oxygen we need to take ourselves to the next level,” she told European CEO.

Petrou has also recently introduced sleep pods to the Prestige offices, and actively encourages her team to take a 20-minute power nap during their lunch break. “[Taking a short nap] restores the flow of creative juices and boosts productivity – it’s like the beginning of a new day,” she explained. Aside from the boost to alertness, a trip to the sleep pods also takes staff away from their desks and with that, into a new, more creative headspace. “I believe… the quality of the work is always statistically commensurate to the creativity and the inspiration you are tapping into, and inspiration does not come from looking at the computer,” Petrou added.

This care-driven mindset extends well beyond the confines of the Prestige office; it is present in the DNA of all of the company’s subsidiaries. Petrou cites Dermalogica, the number one professional skincare company in the world and a leader in the spa industry, as an example of how a positive workplace culture can bring success to a brand. Dermalogica is built on the principle of dedicating time to self-care, pampering the body and mind, and escaping from the stress of modern life.

Petrou has used her position at CEW to mentor a select cohort of young female entrepreneurs, offering advice and guidance to those at the very beginning of their careers in beauty

“We train about 100,000 skincare therapists globally every year, creating a ‘Dermalogica tribe’, as we call them,” Petrou said. This tribe not only delivers beauty treatments, but also runs meditation workshops and offers health and wellness tips to consumers. “Beauty is connected in all ways, so self-care is part of our business model,” Petrou said.

Magnanimous mission
Petrou’s pride in Prestige’s subsidiaries is palpable when she speaks of their work: “All our brands are setting out to collectively decouple our growth from our environmental footprint, while also leaving a positive social impact.” REN, a luxury British skincare brand incorporated by Prestige in 2015, is a key example. As part of its Clean to Planet initiative, it has recently partnered with the Surfrider Foundation to collect ocean and beach plastic and repurpose it to produce packaging for its products.

Petrou explained: “When we first produced a bottle made with 20 percent recycled ocean plastic, it was grey in colour. Any other company may have said, ‘It doesn’t look luxury enough, we’re not going to do it.’ But we took the risk because we believed consumers would understand and they would respect our commitment to the mission. That’s exactly what happened – people loved the product and the tale helped create new ambassadors for REN.

“I love to tell this story because it just shows that [while] what we think with our own biases may not mimic the traditional criteria of what luxury should look like, actually, [traditional ideas of luxury are] obsolete.” True to its mission, REN is now exploring the production of packaging using 100 percent recycled ocean plastic, and earlier this year became the first brand in the world to make a fully recyclable pump mechanism.

Activism is another essential part of Unilever’s identity. “For us, purpose is authentic; it came from our founders hundreds of years ago,” Petrou told European CEO. “We don’t do it for marketing purposes, we don’t pay lip service to purpose because purpose is trendy.” She believes that, given the role corporations play in modern society, they have a responsibility to improve society, tackle climate change and work to have a positive impact on the planet.

This mission might present itself through work to improve education, support entrepreneurs, improve business processes or simply help a customer to feel better about themselves. She added: “If we can change people’s lives for the better, if we can change the confidence of one person out there, then it is worth coming to work – otherwise what are we here for?”

Guiding light
Alongside her extensive work for Prestige, Petrou is also the chair of Cosmetic Executive Women (CEW), a 60-year-old organisation that supports, mentors and connects women working in the global beauty industry. It has more than 10,000 members, with key outposts in London, Paris and New York. “CEW is a networking body that wants to help women to do more and succeed in beauty,” Petrou said. “The [global] beauty industry is worth [over] $400bn [€354.7bn] annually – it brings jobs, it creates an empowered workforce and it’s a great platform for women.”

Petrou has used her position at CEW to mentor a select cohort of young female entrepreneurs, offering advice and guidance to those at the very beginning of their careers in beauty. “I truly believe that if you can [mentor someone] in the early stages of their career… it means a lot because you can change their life destiny forever,” she told European CEO. “And if we all help each other, then it raises the [collective] consciousness.”

Being an advocate of female empowerment at all levels of the corporate ecosystem, Petrou is heartened by the impact of the #MeToo movement, which she said has inspired women “to stand up for themselves more” and “take power into their own hands”. While there are still plenty of obstacles to overcome, these can be tackled, she added, by demonstrating capability, passion for a cause and courage of conviction: “I believe business is smart; if it sees that you too are smart, then the promotions and the recognition will come. Women need to have more faith in themselves [in that regard].”

Petrou’s parting advice to all women is simple yet powerful: “Never lose faith, never be overcome by fear, and fight for what is fair.”