With the majority of the globe’s waste being dumped in methane-emitting landfill, a sustainable solution is essential. Marisa Hernández Latorre is proving that one person’s trash is another’s treasure 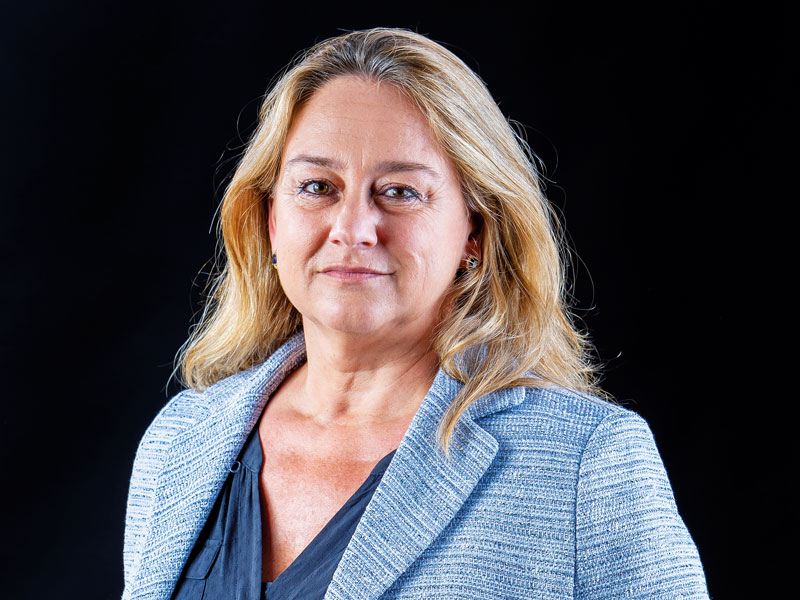 Through Ingelia’s novel – and much-needed – technology, Hernández Latorre is doing something remarkable for the waste management industry, breaking ground and offering solutions where few others are
Profiles

Waste management is perhaps one of the greatest challenges facing mankind. Thanks to a global population of more than seven billion, continued economic development in all four corners and current consumer habits, the amount of waste we generate worldwide is astronomical – and it’s getting worse.

One solution to this 21st-century dilemma is the much-recited instruction to ‘reduce, reuse, recycle’, but this three-pronged approach is by no means the only way of tackling the mammoth waste problem we face today. Another course of action relates to hydrothermal carbonisation (HTC) – a new technology with a relatively old past. At the centre of this technological breakthrough is Marisa Hernández Latorre.

Hernández Latorre is the CEO of Valencia-headquartered Ingelia, the first company in the world to offer HTC processing on an industrial scale. Today, it has two plants in operation (one in Spain and one in the UK) and plans in place for a further two. Through this novel – and much-needed – technology, Hernández Latorre is doing something remarkable for the waste management industry. She isn’t just the CEO of a fast-growing European company – she’s the leader of an organisation that is breaking ground and offering solutions where few others are.

Nobel intentions
HTC refers to a chemical process where organic compounds are converted into structured carbons that imitate the formation of brown coal that takes place in nature. But instead of taking 50,000 to 50 million years as the natural process does, the time frame is radically reduced to just a few hours. The end product is hydrochar, a reusable and safe biomass fuel that resembles charcoal.

A report published by Bioresource Technology Reports in June 2018 explained the immense importance of the process: “HTC has the potential to revolutionise food waste conversion, transforming it from a complicated and time-consuming process into one that is simple and fast.” The HTC process can be used to treat various types of biomass: vegetation, including waste from forestry, gardening and agriculture, and other types of organic waste, such as human waste and wastewater sludge. Nobel-Prize-winning chemist Friedrich Bergius first wrote about HTC in 1913 but, despite his pioneering work, the growing importance of oil at the time left little room for industrial applications of HTC to be developed. It was not until decades later that Professor Markus Antonietti of the Max Planck Institute of Colloids and Interfaces began to further research and develop the application of HTC for treating biomass.

In 2005, with dreams of making Antonietti’s work a reality by developing HTC technology on an industrial scale, three engineers, including Hernández Latorre, founded Ingelia. “We had a vision to see this technology in the market; [we knew it] would create a lot of opportunities,” she told European CEO.

By 2007, Ingelia had designed its first industrial plant, and in 2009 started working with the Institute of Chemical Technology (ITQ), an arm of the Polytechnic University of Valencia, and Spain’s National Research Council. “They drive the research agenda on HTC, and we apply the results at [an] industrial scale in our facility,” Hernández Latorre said of her company’s ongoing relationship with the ITQ. In 2010, Ingelia opened the first facility to use the technology on a commercial scale. Today, the Valencia-based plant processes around 6,000 tonnes of biowaste annually.

Laying the foundations
Hernández Latorre’s background is testament to her proclivity for innovation. After studying industrial engineering at university, she worked in telecommunications. “I belonged to the team that started Jazztel Telecomunicaciones, which is [now] the [second-biggest] operator in Spain,” Hernández Latorre said. “We started working in this company from scratch and then it was [listed] on Nasdaq [in 1999]. [During that time,] I learned a lot about growing companies and bringing innovative projects to the market.”

While at Jazztel, Hernández Latorre completed an Executive MBA at the European University of Madrid in Valencia in a bid to learn the art of managing a company. “I also studied music at the [Conservatori Superior de Música Joaquín Rodrigo de València] for six years,” she added. “I think that brings a lot [in terms of] understanding new things and advancing new ways of thinking.”

This desire to learn has acted as a driving force in Hernández Latorre’s career. “I love innovative projects; making something new creates value,” she explained. “I am an industrial engineer, but I have always been involved in bringing innovative products to market.”

Ahead of the commission
What’s remarkable about Ingelia’s work is just how ahead of the curve the company was when it started. It was established some years before the European Commission published its circular economy policy in 2015. “We were contributing to the circular economy [back] in 2010 when we built the first reactor [and started] turning waste into product,” Hernández Latorre said. “Then, in 2014, [we began] selling this product in the UK through CPL Industries.”

In light of its innovative work, Ingelia’s research activities have gained support from the European Commission. In 2013, the company received financing as part of the European Commission’s Seventh Framework Programme, which encourages the development of biomass waste management solutions. The project, called NEWAPP, ran for almost three years, enabling Ingelia to demonstrate the efficiency of its HTC plant and its ability to process biowaste. It also revealed the technology’s capacity to process a much wider range of substrates, including green waste, organic waste and sewage sludge, into high-value biocoal and liquid fertiliser.

It was at this point that the rest of the industry began to catch up with Ingelia. “The new waste directive was changing,” Hernández Latorre explained. “All waste management companies in Europe were looking for solutions in order to follow [the European Commission’s] new directive and comply with the new regulations.” With experience processing at a commercial scale, Ingelia was in a unique position to work with these businesses immediately.

Leaving landfill
As we continue to wreak havoc on our planet, supranational organisations such as the EU are ploughing forward with new environmental initiatives. “The European Commission published the circular economy policy because [it] wanted to recover the elements of waste, as Europe imports a lot of raw materials,” Hernández Latorre told European CEO. “[At Ingelia’s plants,] we record two of the 27 critical raw materials included in the European Commission’s list – [cooking coal and phosphor]. And that’s really important because it’s [all] about avoiding landfill.”

Dumping organic waste into landfill creates carbon dioxide due to the fermentation process that takes place. Organic waste in landfill also emits methane, which is around 21 times worse in terms of its global warming potential than carbon dioxide, ranking it among the worst of the greenhouse gases. “[Through HTC technology,] we recover more than 98 percent of the elements that are inside the waste – mainly carbon, nitrogen, potassium and phosphorus,” Hernández Latorre said.

What’s more, she explained, the process takes place in a closed environment, meaning there are no emissions released into the atmosphere. Hernández Latorre added: “The plants can be dug closer to municipalities and cities because we don’t need to manage [them along] with other programmes, so the transfer rate is reduced.” Ingelia also promises to save local authorities money by reducing treatment fees by around 20 to 50 percent, while enabling them to meet the European Commission’s recycling targets.

The EU is also pushing forward with its efforts to increase the number of wastewater treatment plants in the region, making the production of wastewater sludge an increasingly urgent problem. HTC plants can solve this issue by converting sewage sludge into hydrochar and liquid fertiliser, which are
suitable for a variety of applications.

“Local governments are dealing with green waste, organic waste and sewage sludge… They need a solution to treat this waste,” Hernández Latorre said. “We work together with a company locally. We provide technology, core equipment and technical assessments in order to install a plant close to a municipality and put it into operation. [Then it can] valourise all the organic waste [produced in the area] and transform it into products.”

Word of advice
When asked about the experience of pioneering such a cutting-edge field, Hernández Latorre said: “It’s [been] really difficult because of the investment [required]. To invest in innovation at small scale is possible; when the scale is larger, then it is more difficult because it is normal for investors to have doubts at the beginning.” Hernández Latorre resolved this complication by building a “network of knowledge” around the project.

“We have put together investors, scientists, technicians, clients and also regulators,” she added. “We have been participating in working groups, developing new norms and standards for products in order to face all the challenges and make the right decisions, [taking into account] all the stakeholders [who] could affect the development of the project.”

Talking about leadership, particularly in terms of new technology, Hernández Latorre said: “You really need to be able to understand different points of view, because the success of an innovative project relates to the agreement between all stakeholders.” She also advises a regular review of project plans and having the personal capacity to adapt whenever necessary. When doing so, investors must be informed of any change in business plans, she said: “This [is] very important, so that they understand all these changes and how the project is going.”

Hernández Latorre’s focus for the next three years remains in Europe. “We have two more plants under construction in Belgium and in Italy – both projects will be operational in the first semester of 2020,” she said. Hernández Latorre is also hoping to partner with more companies that will buy the plants’ end products while increasing the company’s output. In the long term, further expansion is certainly on the cards, she said: “We are developing partnerships with companies that can help us to deploy our ambitious business plan worldwide within the biomass and waste management sector.”

Being an innovative thinker is one thing – bringing grand visions to fruition is quite another. But innovation has always been part of Hernández Latorre’s ethos. It is in part thanks to this spirit that Europe has a viable waste management solution in place. Ingelia might still have a relatively low profile, but given its importance to the development of a circular economy, that’s not the only thing that is set to change in the near future.