Taco Carlier is greasing the wheels of the e-bike industry

Cycling to work offers health and environmental benefits, but concerns about road safety and bike theft put some commuters off. Taco Carlier has made it his mission to tackle these issues and get the world on two wheels 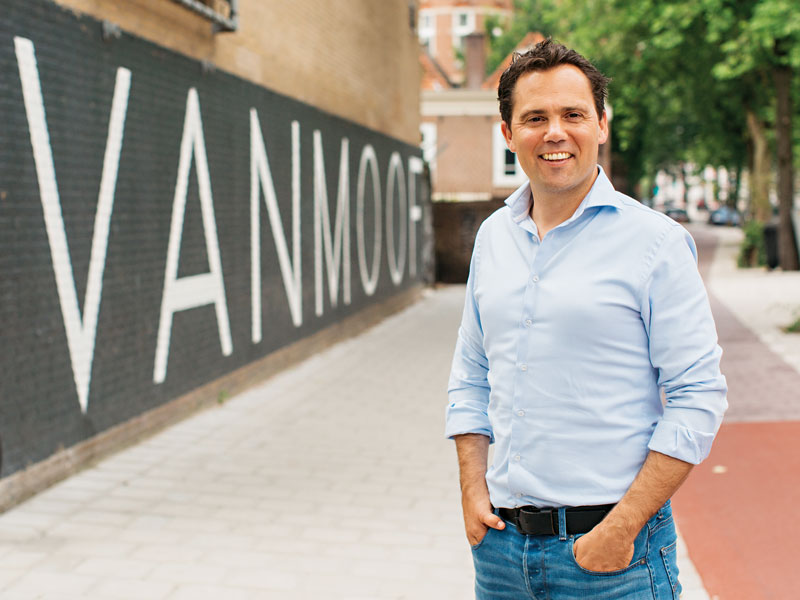 Growing up in the east of the Netherlands, living in Delft and moving to Amsterdam after university, cycling has always been an important part of Taco Carlier’s life
Profiles

Taco Carlier is a problem-solver by nature. As teenagers, he and his brother, Ties, would draw up ideas for products they believed could change the world and try to knock them together in the family garage. “Ties and I, we’ve always had the skills to turn problems into solutions, by approaching them with creativity,” the Dutch entrepreneur told European CEO. “We were raised like that.”

This ability to examine something objectively, identify its shortfalls and then tinker to produce a superior alternative has been the driving force of Carlier’s diverse entrepreneurial career. First, it took him to the Delft University of Technology, where he studied industrial design and engineering. Then, it led him and Ties to set up Dutchband, which supplies identification wristbands and drinks tokens to the events industry. Today, the company is the largest of its kind in the Netherlands, and the two brothers remain its co-CEOs.

If governments invest in infrastructure to support cycling, it will become increasingly valourised as a mode of transport, which will improve safety

“Through Dutchband, my brother and I learned how to work together on complex product design,” Carlier said. “We love it when software, hardware [and] electronics all come together, and [we can] then turn that into integrated products.”

With their revolutionisation of the events sector well underway, in 2009, the brothers set their sights on the commuting market. They pooled all the knowledge they had amassed with Dutchband and created VanMoof, a smartbike manufacturer whose models are designed for urban commuters.

Passing obstacles
It seemed almost inevitable that bikes would be the vehicle for Carlier’s utopian vision of tomorrow’s commute. Growing up in the east of the Netherlands, living in Delft and moving to Amsterdam after university, cycling had become an increasingly important part of his life. “Amsterdam is, of course, known as the capital of cycling, and being here, you can see how much bikes can improve a city,” he said. “Air quality improves, people are healthier [and] there’s less noise pollution.” The company’s product offering is symptomatic of Carlier’s signature solutions-based attitude. “We’ve tried to remove all the barriers that people encounter when they want to [start] cycling,” he told European CEO. “We realised, for example, that a lot of people were afraid of buying a bike because they were worried it would be stolen, so we made a bike with an integrated tracking system.” This system is controlled via a mobile app, meaning users can lock their bike remotely and check its location at any moment. The company also has a global team of ‘bike hunters’, who, if a bike is stolen, can use its internal Global System for Mobile Communications module to track it and return it to its rightful owner.

The next aspect to improve on was comfort. “Amsterdam is flat and kind of small, and the weather is nice and cold,” said Carlier. “But when you go to, for instance, New York, San Francisco or Paris, these cities can be much hillier, much bigger and much warmer in the summer. So, we introduced an electric bike to help people commute to work without sweating.”

Finally, the company sought to tackle the financial burden that comes with purchasing such a hi-tech, hi-spec piece of kit. “For a lot of people, it’s still hard to spend €2,600 on a bike,” said Carlier. “This we solved by offering our bikes on a subscription basis. Customers pay a monthly fee, and we take care of everything: the bicycle, the insurance and, of course, the anti-theft system.”

On the right track
For the first six years of VanMoof’s existence, Carlier and his team focused predominantly on research and development. “We were mainly working on the redesign of the way bikes are produced,” he said. “That’s how we created this beautiful, integrated product, in which software and hardware are perfectly merged.” In 2015, the company brought its first electric model to market; this catalysed a period of rapid global growth that has continued ever since. As of April this year, the company had sold 11,000 of its Electrified S2 and X2 models, generating more than €30m in revenue. “Until 2009, we had 20 employees – now we have 200 and our turnover is doubling every year,” Carlier told European CEO.

He attributes the company’s success to its single-minded approach, which has allowed it to fine-tune its product. “I believe we have the best product for commuters in cities – and that’s because we focused for 10 years on commuting only,” Carlier said. “We didn’t do any cargo bikes, no racing bikes, no mountain bikes, only improving commuter cycles. So that’s why we’re now ahead of the game.”

Alongside its web outlet, the company has eight brand stores in cities such as Berlin, London, New York and Tokyo. This might seem an odd choice given that the company makes 80 percent of its sales online, especially considering the cost of operating a retail outlet in each of these cities. “I consider VanMoof a digitally native vertical brand – vertical because we own the entire value chain and digitally native because we operate mainly online,” said Carlier. “But for us, our stores allow us to get our brand out in those cities and maintain our direct sense of connection with the customer. Plus, they’re great for test rides and [hooking] new people onto the brand. I believe this [model] is the future for consumer brands that sell products – they will always maintain points around the globe where they can connect with customers.”

Given VanMoof’s close relationship with its customers, it seemed natural that they would be the first port of call when the company needed extra capital. “[In 2017], we reached out to our customers with the offer to invest in convertible loans, which can be turned into shares,” explained Carlier. Through this crowdfunding model, the firm raised €2.5m – the maximum allowed by Dutch law for this sort of investment – in just 14 days.

Buoyed by this success, a second round was launched in June this year with the same €2.5m target for public investors. “We were hoping to do it a little bit faster than before – maybe 10 days,” said Carlier. He was blown away when the target was reached in less than 12 hours, making it the fastest crowdfunding round in Dutch history. A private round, for those investing more than €100,000, was ongoing as European CEO went to print.

Leading from the front
VanMoof plans to use the funding to cement its position at the forefront of the burgeoning e-bikes sector, which has grown by 56 percent globally in the past 12 months, Carlier said. He believes a demand for simple, rapid, ecological transport solutions is behind this expansion. “While drivers of electric cars still struggle with short ranges and few charging stations, and e-scooter users with regulatory requirements, e-bike users have it easy – you buy and you’re ready to go,” he told European CEO. “There are just no complications.”

Carlier attributes the company’s success to its single-minded approach, which has allowed it to fine-tune its product

Europe in particular is proving a fertile environment for the e-bike industry to blossom. In the Netherlands, the home of cycling on the continent, sales of e-bikes overtook sales of manual bikes in 2018, while in Germany, one million e-bikes were sold that year – an increase of 36 percent from 2017. This growth shows no sign of letting up, either: the European Cyclists’ Federation estimates that at least 150 million e-bikes will be sold across the EU between now and 2030.

Growth in the e-bikes market has aligned with increasing urbanisation in these countries. In the Netherlands, for example, 90.64 percent of the population lived in urban areas in 2016, a figure that is set to increase to 96 percent by 2040. Carlier believes that this is no coincidence. “There’s so much traffic pollution in cities – once people realise how dirty the air is, they [want to] switch to electric motor mobility,” he said. “It works so much better and it’s faster than any other kind of transport. An electric car is still a car taking up lots of space. Two wheels are just way more efficient within an urban environment.”

Safety first
There is certainly a compelling argument for switching to cycling, with just one hitch: safety. This is not such an issue in Amsterdam, where cycling is a vital part of the capital’s identity, but for other European cities, complex road systems and harried urban drivers make for a dangerous environment for bike users. In Berlin, 11 cyclists were killed and 8,000 injured in 2018, while at least 10 cyclists lost their lives in London in the same year, predominantly as a result of collisions with cars.

Carlier believes the solution is two-fold, with the first aspect being separate bike lanes. “That’s how it started in Amsterdam in the 1970s. The government invested in separated bike lanes, the number of accidents declined and more and more people started cycling.” Today, around 55 percent of commutes in the city are completed by bike, while the fatality toll stands at around six people per year.

Carlier also believes culture has a significant part to play, reasoning that if governments invest in infrastructure to support cycling, it will become increasingly valourised as a mode of transport, which will improve safety. What’s more, he expects that as people realise the benefits of cycling, they will choose to bike rather than drive around cities, meaning that there will be fewer cars on the road altogether. “Culture will change as people realise how much better cycling is,” Carlier said. “It’s so much healthier to spend, let’s say, half an hour on a bike every day than any other mode of transport.”

Co-running Dutchband and VanMoof doesn’t leave Carlier with much time to relax, particularly with two young children, aged two and six months. His wife is also an entrepreneur, and the family live a short ride from VanMoof’s offices in Amsterdam. He credits this with helping him stay focused: “I didn’t commute for a few years because my front door was 10m from my office,” he said in an interview with VanMoof. “I missed that ride to work and what it did for my happiness and productivity.”

He certainly practices what he preaches – and with two successful businesses under his belt, there are few who wouldn’t want to follow in his footsteps. To those budding entrepreneurs, he advises: “Just start – because you can only find out by doing, and the worst thing is not starting.” It’s this practical approach that has defined Carlier’s success so far and will no doubt shape whatever he turns his hand to next – after he’s got every urban commuter on an e-bike, that is.