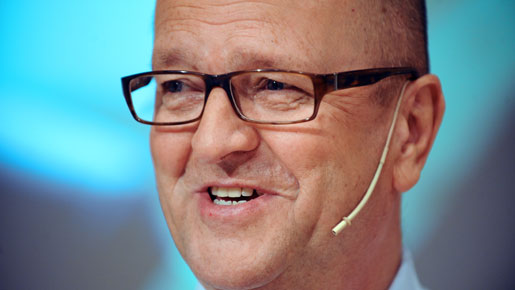 Mats Jansson wants to take us on a journey. It’s good for business. He met with global leaders in New York on September 22, 2009, as part of the UN Leadership Forum on Climate Change. As head of Europe’s most punctual airline, the CEO of SAS vowed one day soon to fly the world’s greenest planes. How’s that then?

“Our goal is to be the world’s most environmentally-focused airline,” said Jansson, 57. Don’t rule it out. This is a man who has been setting himself ambitious goals for the last 30 years. But while he’s forging a niche in green air travel, the priority remains creating a strong, profitable business, with the best possible return for shareholders.

Jansson was born in Kolsva, Sweden, in 1951. Married, he now lives in Stockholm with four daughters aged 13 to 27. His hobbies include skiing, tennis and running marathons. A good start for someone who claims to have a passion for clean air.

He studied economics and sociology at the University of Orebro, before launching his career at the Swedish retailing group ICA – the largest retail company in the Nordic countries.

ICA presented the young man with plenty of opportunity to show his early worth as an astute manager and organiser. He held several senior positions between 1973 and 1994, before becoming CEO of Catena, one of the leading players in the commercial real estate market. The business involved actively developing commercial real estate in prime locations to meet that core objective: keeping shareholders happy.

After becoming CEO for the food and confectionary chain, Fazer Group, he took up the lead role at store wholesaler Axfood. Axel Johnson followed, where Jansson was responsible for 14,000 employees, in 25 countries and sales of SEK 43 billion.

Then came the cherry: he was unveiled as President and CEO of SAS Group, in January 2007. “He is accustomed to working in sectors characterised by major changes,” said Egil Myklebust, Chairman of the SAS Board of Directors, on his appointment. Jansson was attracted to the firm’s large customer base, skilled employees and innovative style.

Formed in 1946 through the merger of three Nordic airlines, the contract for a joint Scandinavian airline was signed in the early hours of August 1. SAS became first in the world to have scheduled flights over the polar region. It was also the first airline to introduce an electronic booking system, the first to permit smoking on its routes and the first to introduce a smoking ban in 1986. Jansson’s immediate goal was less about innovation and more about strengthening the company’s position, which had been weakened by budget airlines and falling trade.

“Both the airline industry and SAS still need to undergo changes,” he said.

At the heart of his plan was attracting more paying customers, by cutting costs, by tackling the unions. The impact was almost immediate as the company posted increased earning for the first quarter of 2007. The Group’s total operating revenues increased by 6.7 percent. Jansson said the improvement was due to healthy market growth, higher yield, cost controls, and new business models. The cut backs and efficiency savings came at a price. Three months in, he criticised ‘unlawful disputes’ by workers, but insisted his programme of change would continue.

In June 2007, he announced a ‘new direction’ for the company. The airline would focus on the home market of Northern Europe. Services that did ‘not belong to the core business’ – such as Spanair – were to be sold. He promised to increase pre-tax profit to SEK 4 billion per year until 2011, while lowering running costs by SEK 2.8 billion. “We have to abandon the strike culture that has long existed at SAS,” he said. “We have to stand together behind a new customer-oriented business culture based on the needs, requirements and expectations of customers.”

New concepts for leisure travel were developed, which included SAS becoming the first European airline with a website dedicated to the gay, lesbian, bisexual and transgender/transsexual (GLBT) market in July 2008. Then, on August 21, 2008, tragedy. A Spanair jetliner leaving from Madrid for the Canary Islands crashed during its mid afternoon takeoff killing 154 people. It was Spain’s worst air disaster in 25 years. Jansson flew straight to the scene. “As Spanair’s owner I wish to express my condolences to all the families of the victims,” he said. By November, 2008, the SAS credit rating was downgraded by Moody’s from B1 to B2.

The drop was blamed on weakening profits due to high jet fuel prices, overcapacity in the Scandinavian air market and the business cycle. The company’s credit rating continued to fall (in November 2009 the Moody’s measure was downgraded another step from B3 to Caa1), but 2009 signalled an important milestone. Jansson reached a deal with unions to save SEK 1.5 billion. “I interpret this as a clear indication that we are on track to succeed in a cultural turnaround at SAS,” he said on January 14, 2009.

“For the first time, we shared the same understanding of the problems and the target scenario. Our employees have demonstrated great understanding and the trade unions have acted responsibly.” He joined the pilots and management in reducing his salary by six percent. The sale of Spanair was finalised in March 2009. More good news followed. SAS was named the world’s third most punctual major airline in October, 2009, by Flightstats.  Then the company reported a net profit of SEK 152 million in November 2009, for the third quarter, up from a loss on the previous year.
Jansson plans to cut 4,500 staff over the next two years. Staff have been called on to accept pay cuts of up to 10-20 percent.

His other objective is to reduce the company’s total climate-impact emissions by at least 20 percent by 2020 and to have the airline industry’s best fuel saving program by 2011. Jansson’s green business model is preparing to take off on the back of efficiency savings. Shareholders could be in for a bumpy, but rewarding ride.