Berlin is upping the pace as Europe's fastest developing city 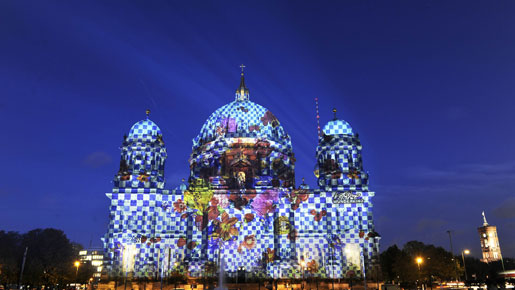 Since the infamous wall came tumbling down on November 9th, 1989, Berlin has not just rejuvenated itself as capital of a reunited Germany – a role it regained in 1999, just in time for the new millennium – but has become one of the world’s most vibrant cities for business, for culture and for tourism.

In visitor numbers – currently 140 million a year, some 15.7 million of whom stayed in hotels or guesthouses – Berlin is surpassed in popularity among European cities by just London and Paris.

Its heart is far bigger than you might think, with a city area of 890 sq km, and a 234 km boundary making it nine times bigger than the city of Paris. It’s only by circumnavigating the ring road autobahn that the sheer scale of the place can be properly gauged.

3.5-million people now call Berlin home but while the locals have a strong sense of identity and civic pride, Berliners readily accept that theirs is a truly open city, ever ready to welcome the world.

An amazing calendar of around 1,000 events offers close on 1,500 choices each and every day.

There’s a total of 175 museums, 130 theatres and stage ensembles, seven full-time professional symphony orchestras, three opera houses – with a programme of 770 performances each year – and a vast choice of conference and incentive venues for events of all sizes.

The statistics are impressive. Some 273 venue providers today offer a total of 379,100 sq metres of meeting space – including 95,100 sq m within some 156 world-class hotels and 57,900 sq m in six dedicated convention centres and halls.

There are also 111 more unusual venues listed by Berlin Tourismus Marketing GmbH, the city’s highly active convention bureau. These range from the famous zoo to the Schokoladenrestaurant, which opened on the Gendarmenmarkt in 2006 as Europe’s first chocolate restaurant.

Or how about an after hour’s corporate event on the fabled sixth floor at KaDeWe, an Aladdin’s Cave of a department store, where an average 40,000 shoppers a day are served by some 2,000 employees? Offering 1,300 varieties of cheese, 1,200 different kinds of sausage and 2,400 wine vintages, this place outshines even Harrod’s famed food hall.

Around 100,000 conference and incentive type events are now staged in Berlin each year, with an audience of around 7.45 million. Of these, around 80,000 events, with more than four million participants, take place in the city’s convention hotels and 2,500, with around 800,000 attendees, in convention centres and halls.

Approaching a quarter of all Berlin’s corporate and institutional events are now of an international nature, reflecting Berlin’s regained status as the city that’s strategically located right at the heart of the modern Europe.

The unique combination of culture, lifestyle and history – the tourism co-ordinates of this great metropolis on the River Spree – add up to a potent appeal in the international mind-set. Not only has the German capital experienced double-digit annual rates of increase in the numbers of guests it has attracted in recent times but it has seen an especial growth in demand from those with business affairs and cultural interests as the focus of their visit.

This led to the launch of a major cultural campaign, running throughout 2007, to provide a lasting positioning of Berlin as a major international cultural centre.

The results of a survey carried out through its offices around the world by the German National Tourist Board demonstrated that the Berlin brand is already well established in a range of areas.

With its leading design studios, its pulsating club scene, galleries, fashion, contemporary art and vibrant music and film scene, Berlin is now seen as one of the world’s trendiest cities. Entertainment, in all its facets, opera and classical music, art – with superb museums and large-scale exhibition projects – and the city’s long, often troubled but ever fascinating history were all pinpointed as major attractions for incoming visitors as well as German nationals.

Berlin is not just hip – it’s trendsetting, with its finger firmly on the pulse of the times. Even New York talent scouts now haunt the clubs and boulevards looking for tomorrow’s stars.

With new buildings and new projects emerging in a flood, at one time a quarter of all the world’s construction cranes were said to be working here. The results have been dynamic, with cutting edge architecture to be seen at such sites as the vast and amazing new multi-level central railway station, Sir Norman Foster’s restoration work, with its sparkling glass cupola, and other new additions at the Reichstag, which today houses Germany’s Bundestag parliament, and the restructured Potsdamer Platz, Pariser Platz and Leipziger Platz, that previously languished as virtual bombsites.

The spur for much of this revival was, of course, Berlin’s regained function as a major capital. This is evidenced in the government and embassy districts with the rash of new or imaginatively renovated buildings for state, regional and international representatives and major national and global institutions. And there are yet more vast projects still to be completed, such as the restructuring of the Alexanderplatz, once the heart of East Berlin, and the renovation of Museum Island.

Trends are not just being set in architecture but in fashion and design too and in January 2006 UNESCO selected Berlin as a ‘City of Design’ – the first metropolis in Europe to attract such designation, leading to its inclusion in the organisation’s global Creative Cities Network.

Already established organisations and events have been relocating to Berlin. Dynamic entertainment companies such as MTV and Universal have set up shop there and Popkomm, one of Europe’s largest and most important music and entertainment shows, has relocated there from Cologne. Poppkom sits well beside such long-established events as the annual Fête de Musique live music spectacular and, celebrating its 58th edition, Berlinale, the city’s annual and globally important film festival and marketplace, at which some 350 films of all genres, many enjoying their world premiere, compete for the prestigious awards.

Given Berlin’s window on the world mentality it’s no surprise that it is home to the global travel industry’s biggest event, the Internationalen Tourismus-Börse (ITB) International Tourism Exchange) that attracts exhibits from more than 11,000 tourism companies from 180 countries.

Tourists, rather than those who look after them, venture now to the new Legoland Discovery Centre, on Potzdamerplatz. Here, built from some 11,000 Lego bricks is a recreation of modern Berlin, with the Television Tower, the Victory Column, the Brandenburg Gate, the Memorial Church and other icons faithfully recreated.

It’s a great fun, quirky overview of a great city that’s also great fun and, yes, quirky. There’s another superb overview to be enjoyed from the seat of a restored DC3 Dakota of the type that carried out the famed Berlin Air Lift, an initiative that broke the Soviet blockade of the city back in the troubled times of the immediate post World War II era when Berlin was little more than a pile of rubble. Available for corporate bookings, the plane is operated by Air Service Berlin from the old city centre airport at Templehof.

Given its location on some of the world’s potentially most expensive real estate and the fact that a state-of-the-art new international airport is soon to open, the historic Templehof’s future is in the balance. That is, however, a simple reflection that Berlin is a city that makes as many changes as a kaleidoscope and never ceases reinventing itself.