Businesses must make space for Generation Z in the workplace

Discussions of how businesses can appeal to today’s Millennial workforce have come a little too late. The next cohort of workers – Generation Z – is already on the scene, and differs significantly from those who have come before 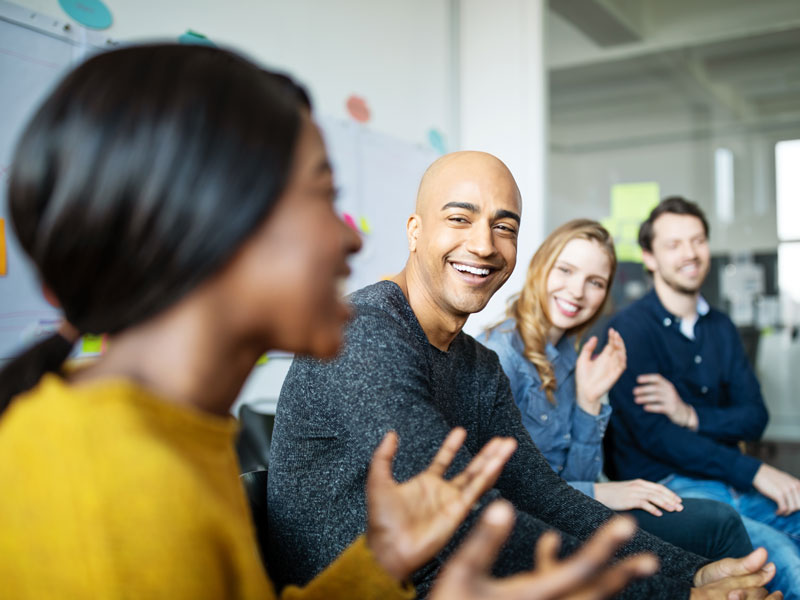 Gen Z – the age group that roughly encompasses individuals born between 1997 and 2015 – has arrived, and it’s about time organisations started taking notice
Management

Millennials remain the focus of attention (and much derision) in many online think pieces. When cultural commentators aren’t criticising them for being ‘snowflakes’, companies are cynically trying to appeal to their progressive sensibilities. But with the Pew Research Centre defining a Millennial as anyone born between 1981 and 1996, the oldest members of this cohort are now approaching their 40s. Whether you hold broadly positive or negative views of the generation in question, one thing is clear: they’re not the new kids on the block anymore.

While businesses have spent time analysing (and generalising) Millennials, their successors have quietly entered the workforce. Generation Z (Gen Z) – the age group that roughly encompasses individuals born between 1997 and 2015 – has arrived, and it’s about time organisations started taking notice.

Each employee is an individual, and businesses should not expect entire age groups to behave in a homogenous way

Perhaps the main difference between Gen Z and those who came before is the fact that they are the first generation of true digital natives: while many Millennials have grown up in an age of great technological development, older members are likely to remember the dark days before the internet. Gen Z is also extremely entrepreneurial, competitive and welcoming of change. If hiring managers want to attract these bright young minds to their companies, they’ll need to recognise that they have different priorities to older members of staff.

Get up and go
One of the most striking things about Gen Z is that studies have shown it to be the most entrepreneurial generation yet. According to research collected by Online Schools Centre, 41 percent of Gen Z plan to start their own business and 45 percent believe they will invent something that changes the world. As with any generation, these trends have not developed in isolation – they are products of the world in which young people today have grown up.

“Coming of age during a time of hardship (a global recession, for example) often brings more entrepreneurial spirit, so that will certainly have a lot to do with the raw drive and hunger seen in many Gen Zers,” Ben Gamble, Head of Agency at Shout About, a London-based creative events agency, told European CEO. “In addition, I think Gen Z saw a lot of burnout first-hand – watching older generations work day and night without much ‘me time’, which I believe increased their desire for a better work-life balance. Many, I am sure, see having their own business, whereby one can work to a rhythm that perfectly fits their needs, as an excellent option for a healthier life.”

The decade of slow growth and, in some countries, government-imposed austerity that followed the global financial crisis of 2008 coincided with many Gen Z members’ formative years. Over this period, they witnessed Millennials struggle to achieve the financial security attained by past generations, despite no shortage of ability or hard work. They’ve seen older generations take on ‘side hustles’ – a marketing euphemism for ‘second jobs’ – to simply get by.

Against this backdrop, it’s easy to see why Gen Z are so keen to strike out on their own. What’s more, they’ve been helped by the fact that starting a business has never been simpler: the digital economy has lowered barriers to entry across a whole range of industries. That doesn’t mean it’s any easier to have a successful career, but whether you want to become a YouTube star or an online business mentor, you no longer need huge amounts of up-front capital to get started.

The future of the woke-place
Although many within Gen Z harbour ambitions of becoming their own boss, there are still plenty in this cohort that will end up in a more traditional employee-employer relationship. For businesses and recruitment agencies, the task remains unchanged: catching the eye of the most talented individuals.

For members of Gen Z who don’t start their own business, career progression is hugely important. According to research conducted by workplace coaching firm InsideOut Development, 75 percent of Gen Z think they should receive a promotion after working in their first position for just one year, while 32 percent believe career advancement should occur after six months. They are also keen to be mentored on their way to the top – more than 75 percent believe that a manager’s ability to coach is an important attribute.

“Employers can appeal to Gen Z talent by keeping things interesting,” Gamble said. “It’s essential to offer roles with clear progression and training programmes so that talent will continue to grow and learn. We also find that offering unique rewards and benefits, such as flexible working hours, along with regular team-building exercises also pays dividends.”

Employers looking to attract Gen Z staff should be aware that ethics are a key consideration for this generation. Many, if not all, members of this group champion social activism and progressive attitudes in their place of work. “Social purpose is a big value set for Gen Zers,” Dr Naeema Pasha, Director of Henley Careers, told European CEO. “We see in the media every day how young people are taking a stand on issues like climate change… diversity and inclusion. These values will eventually move into the mainstream and become more dominant beliefs across all age groups. We found in our research that more than half (53 percent) of Gen Z feel they need to be able to express values that are important to them through their career and nearly a third (29 percent) find it annoying when employers don’t share the same values.”

As Pasha explained to European CEO, “wokeness” – the quality or state of being aware of social justice issues – is an increasingly important value for the members of Gen Z (and younger Millennials) now entering the workforce. Flexibility is also highly prized: unsurprisingly, the generation most inclined to become entrepreneurs demands a high level of autonomy from its employers.

Celebrating difference
In every workplace, the employer-employee relationship should be a reciprocal one. As Gen Z begins to make up an increasingly large proportion of the workforce, they will understandably be keen to undergo personal development under the tutelage of their more experienced co-workers, but senior members of staff should be open to learning from their new recruits as well.

“Gen Zers are enthusiastic, willing to take risks and explore new ideas,” Danny Brooks, CEO and co-founder of VHR, a global technical recruitment organisation, told European CEO. “They value diversity in experience and encourage the inclusion of everyone from all walks of life, which is highly beneficial to teamwork, especially across different generations. Technology skills are useful not just in themselves, but for the ability to learn new ways of working and adapt fast to dramatic change.”

As Brooks mentioned, Gen Z has plenty to offer in terms of skill set, particularly when it comes to digital solutions. According to WP Engine and the Centre for Generational Kinetics’ 2018 report, Reality Bytes: the Digital Experience is the Human Experience, 61 percent of Gen Z cannot go more than five hours without internet access; 32 percent can’t last more than an hour. Connectivity is not simply another part of their lives, whether in or out of the office – it is a necessity. This has resulted in Gen Z being naturally accustomed to digital tools and the pace at which they change. Managers should tap into, and learn from, this capability.

Another thing that more senior members of staff may discover as they are joined in the office by members of Gen Z is that all the survey results in the world cannot tell them everything they need to know about their new recruits. Each employee is an individual, and businesses should not expect entire age groups to behave in a homogenous way. This is as true for Gen Z as it was for Millennials, Baby Boomers and, indeed, all past generations. Identifying general trends among potential employees is a good idea; generalising is not.