Or should that be launch? Jane Bordenave talks to Thomas Warg of Special Airport Oberpfaffenhofen about this unique location that is home to both first class business facilities and a space exploration centre 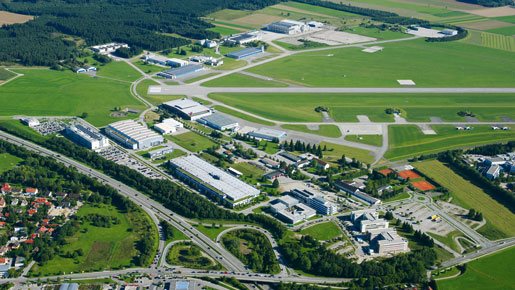 Located just 22km outside Munich, Germany, Special Airport Oberpfaffenhofen is a conveniently located private airport with an eye to the business traveller. It is one of Bavaria’s longest established airports, having been founded in 1936 by Prof. Claude Dornier, Head of Dornier Metallbauten GmbH with the aim of constructing and producing his planes. The facility covers a total area of 249 hectares, making it the third largest civil airport in Bavaria after the commercial airports in Munich and Nuremburg.

Despite its age, Special Airport Oberpfaffenhofen is a high-tech location. “The airport is home to the German Aerospace Centre (DLR), who run their Space Control Centre and carry out their research flights from here. The Control Centre is also home to the Galileo European satellite project,” says Thomas Warg, head of media relations of EDMO-Flugbetrieb GmbH, the operator of the Special Airport Oberpfaffenhofen. “Besides DLR there are aeronautics and aerospace companies, which develop, produce, maintain, equip and sale aircraft and their components. This airport is today a high tech location essential for Bavaria.”

Projects currently under development at the site include the Dornier 228 New Generation aeroplane from Swiss aviation company RUAG. “Dornier developed many of its technologically advanced planes here over the years, and we see this project as a continuation of that legacy,” says Thomas Warg. Additionally, the companies located on site are able to work and realise synergies with DLR, which, is a unique aspect of the airport. Investments have also recently been made in airport infrastructure, facilities and systems: At 2,286m long and 45m wide, the runway is larger than other nearby regional airports and aerodrome lighting has also been installed, as well as an instrumental landing system for all weather operation.

When it comes to catering to business passengers, Oberpfaffenhofen has a number of advantages over its competitors in the region, including the large commercial airports. “As we do not have any public operating duties, the allocation of departure and arrival slots is not a problem for us,” explains Mr Warg. “Also in September 2009 Rheinland Air Services (RAS) established its business aviation terminal here. The company offers specialist professional business aviation handling including operating the passenger lounge, the crew lounge, briefing rooms and crew rest facilities. They can also make hotel and limousine arrangements plus catering of the customer’s choice, crew and passenger shuttle, quick and easy access to flights, push and pull service. The RAS handling also includes aircraft hangarage, ground power (AC/DC) and aircraft cleaning too.”

There are many other advantages that Special Airport Oberpfaffenhofen offers that many competitors, especially the larger airports, are unable to match. Turnaround time at the location is only 10 to 15 minutes, minimising the time crew and passengers have to wait before take off. Landing fees are lower compared to other airports within the region, yet it is still able to offer all the facilities expected from a larger, commercial airport. Even though it is a small, private airport it is still conveniently located for access to Munich; a direct connection to the Autobahn means passengers can arrive in Munich within 20 minutes of disembarkation. Bavaria’s third city, Augsburg, is also within easy reach only 60km away with a travelling time of under one hour. Last but not least, RUAG Aerospace Services, a licensed and certified maintenance and service centre for Bombardier, Cessna and Embraer business jets is based on the airport.

While Special Airport Oberpfaffenhofen welcomes most fliers, as it is a private airport it is subject to ‘prior permission required regulations. “Since July 2008 the airport has been opened to business aviation also, however charter flights with single seat booking are excluded. We have a number of business operators that have a presence on site, such as DCA Aviation and NetJets. However, as we are a private airport we do not have any operating duties,” explains Mr Warg, “Consequently, anyone who wants to use the airport has to request permission first. We have some limitations – we cannot accept business flights of light aircraft under two tonnes for example – but if the request is within the scope of our airport approval we will give a positive answer and the flight will be welcome here.”

The facility is of great importance to the local economy; while it directly employs some 3,300 people, a further 8,000 jobs are dependent on the airport. 1,700 DLR employees work at Oberpfaffenhofen, as well as 10 percent of RUAG’s global workforce. There are also other smaller service-related companies located at the site, such as 328 Support Services GmbH and the GCT Group GmbH. Bavaria is one of the most important areas for the aerospace industry in the whole of Europe, with EADS, Astrium, Cassidian, Eurocopter, Premium Aerotec and MTU Aero Engines all having a presence in the region. “In total, there are over 400 businesses in Bavaria producing aeronautics and aerospace technology,” says Mr Warg. “If you add their combined workforce with those of the airports, the total number of people working in aerospace in the state tops 50,000 – 30 percent of whom are in the Munich area alone.”

For the future, the airport’s main focus is growth – and lots of it. Over the next five years, it plans to increase the number of flights to and from the airport to 32,000 flights per year and raise the number of employees dependent on the airport to 16,000. These are ambitious numbers, however Special Airport Oberpfaffenhofen has already shown over the past 70 years that it can match up to the competitors. What makes the airport unique now is what will secure these future plans: For business fliers, it offers the rapidity and service of a small airport with the meeting, dining and relaxation facilities of a larger one. It is also an exciting location for anyone involved in aerospace – it is not often that a private airport like Oberpfaffenhofen can claim to also be the home of one of Europe’s main space centres. In short, the airport is unique and is a key location for any discerning traveller looking for a gateway into the heart of Bavaria.

“We are also aware of our responsibility for the environment. One of our measures are noise emission-based landing fees. Thanks to a great use of quieter and modern business aircraft types and strong noise abatement procedures the aircraft noise level in the vicinity of the airport is very low,” explains Mr Warg. “Additionally, the aircraft noise restrictions laid down in the airport approval by the Bavarian Aviation Authority meet the most stringent regulations in Germany and even in Europe.”