The geopolitics of Holocaust memory

The world has adopted a ‘never forget’ stance on the Holocaust. But, in practice, the memorialisation of the Jewish genocide has become a tool for political one-upmanship 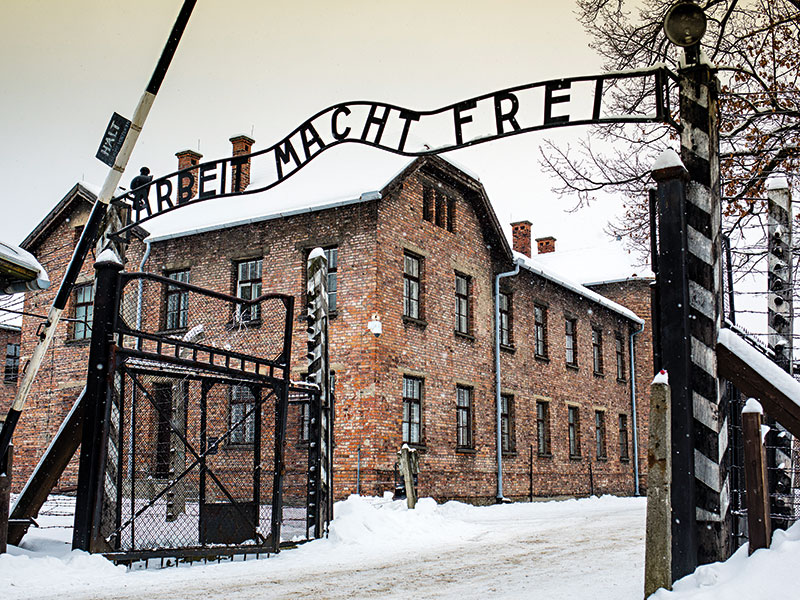 Auschwitz concentration camp. The current resurgence of populism and nationalism makes it all the more important to commemorate the victims of Auschwitz
Featured

The 75th anniversary of the liberation of Auschwitz by the Red Army is an occasion marked by angst as well as sadness. Antisemitism is back with a vengeance around the world, as if the lessons of the Holocaust had evaporated with time – or, even worse, had never been fully integrated into our collective consciousness.

This unprecedented crime, perpetrated by one of the most advanced and cultivated societies on Earth, was the most extreme example of the horrors humans can inflict on one another. When pushed by a combination of fear and hatred, people can become monsters.

The current resurgence of populism and nationalism makes it all the more important to commemorate the victims of Auschwitz. But, 75 years on, the duty to remember is doubly threatened: by the political instrumentalisation of the Holocaust, and by the natural human proclivity to forget the past or become indifferent to the suffering of others.

Competing commemorations
More than ever, we are witnessing what could be called the geopolitics of Holocaust memory. Five years ago, in 2015, the only commemoration of the camp’s liberation took place in situ at Auschwitz, under the aegis of the Polish Government (in the immediate aftermath of Russia’s seizure of Crimea, Russian President Vladimir Putin was not invited to address the gathering).

This year, however, there has been a competition between two commemorations: one in Jerusalem at the behest of the Israeli Government and the European Jewish Congress, and the other, sought by the Polish Government, at Auschwitz.

Poland, where the horror took place, sent no delegate to the Jerusalem ceremony after its president, Andrzej Duda, refused to attend. Duda had not been invited to speak at the event, whereas Putin, French President Emmanuel Macron, his German counterpart Frank-Walter Steinmeier, and the UK’s Prince Charles were.

Having to choose between Russia and Poland, Israeli Prime Minister Benjamin Netanyahu did not hesitate – even though Russia now considers the Second World War to have started in 1941 instead of 1939, when the Soviet Union seized Polish territory under the Molotov-Ribbentrop Pact with Nazi Germany. Poland’s increasingly nationalistic treatment of history in recent years also no doubt influenced Netanyahu’s decision.

Memory loss
The Jerusalem commemoration represented an undeniable diplomatic victory for Israel. Not since the 1995 funeral of former Israeli Prime Minister Yitzhak Rabin had so many world leaders gathered in the city. But the event also constituted a success for Russia, with Putin’s presence confirming his country’s new indispensable status in the Middle East. With the passage of time, the real heroes of the Auschwitz commemorations are becoming ever fewer. But they are in no position to resist this instrumentalisation of their suffering.

Of course, instrumentalising the memory of the Holocaust is nothing new. During the Cold War, Eastern and Central Europe’s communist regimes emphasised the crimes that had been committed by fascists against anti-fascist patriots, thereby relativising or even denying the Jewish origin of the overwhelming majority of the victims.

Today, with the rise of populism, any sort of criticisms of ‘local populations’, or of their ‘complicity’ in the crimes committed by Nazi Germany, have become punishable offences – starting in Poland.

This approach shows no respect for historical truth – and often contradicts it. It suits people who also have suffered deeply, but do not want to confront their responsibility for the suffering of others. Since Netanyahu has been prime minister, the instrumentalisation of the memory of the Holocaust has played a central role in Israeli diplomacy as well, while the Iranian regime, with its repeated calls for Israel’s destruction, seems to be doing its best to encourage such a stance.

The memory of the past is threatened not only by its instrumentalisation, but also by a powerful combination of ignorance and forgetfulness – not to mention the Holocaust-denial camp. One fifth of people in France between the ages of 18 and 34 have no idea what the Holocaust was. And the ignorance of some feeds the fear of others: polls indicate that 34 percent of French Jews feel threatened in their country.

Historical erasure
Tackling this problem is, above all, a question of education. But there is a broader issue as well – namely, the contrast among young people between their legitimate preoccupation with the planet and their lack of interest in politics. The young climate activist Greta Thunberg, for example, has helped to mobilise millions of people. But how can we convince them that ecological awareness is not a substitute for concern about freedom and democracy, but rather complementary to it?

The memory of the Holocaust should be seen as a kind of ultimate bulwark against the politics of hatred at a time when democracy and its institutions are being eroded. But it is not easy to defend the principle of ‘never again’ when social networks are spreading so much atavism and ignorance.

Immediately before the Jerusalem events, I was in Berlin, the city where the Final Solution was conceived. When the rebuilding of the Stadtschloss (Berlin City Palace) is complete, it will house the Humboldt Forum, a cultural centre named in honour of brothers Alexander and Wilhelm von Humboldt, who embodied the Enlightenment spirit. It has taken 75 years to erase the physical traces of Hitler’s genocidal folly – is that the time it also takes to forget the lessons of history?

I have recently been wondering what my father, prisoner number 159721 at Auschwitz, would have made of these 75th-anniversary commemorations. He probably would have felt pride at not being forgotten and sadness at how the Holocaust has become an event to be spun for political gain in a world that has learned virtually nothing.