Who pays for the Green Deal?

The European Green Deal has noble intentions, but the way institutions propose to fund it is cause for concern. Shadow budgets and note printing will not tackle the climate crisis 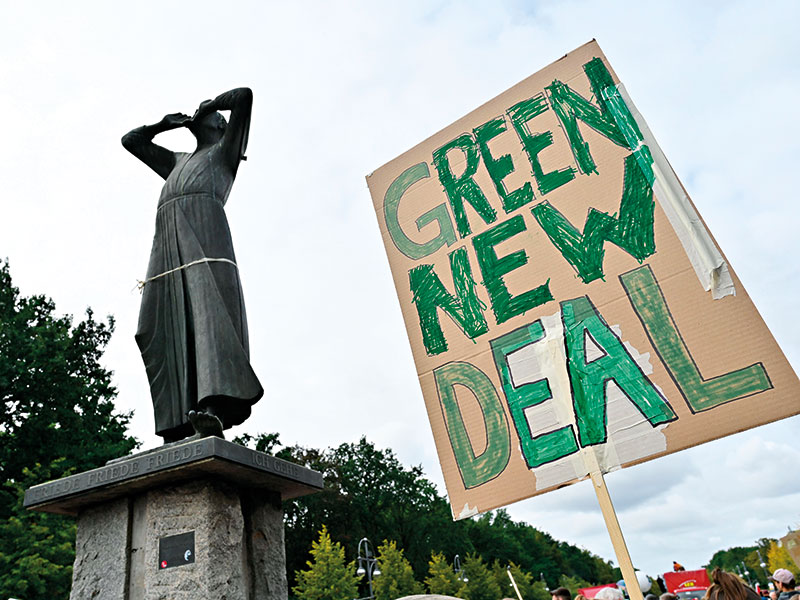 With a €1trn investment package known as the Green Deal, the European Commission hopes to transform Europe into a carbon-neutral economy by 2050
Featured

Author: Hans-Werner Sinn, Professor of Economics, The University of Munich

Under President Ursula von der Leyen, the new European Commission has big plans to address climate change. With a €1trn investment package, it hopes to transform Europe into a carbon-neutral economy by 2050.

But much of that €1trn for the commission’s proposed Green Deal would be generated through financial-leverage effects. In 2020, the EU will formally allocate for such purposes only around €40bn, most of which is already included in the budget from previous years; arguably, only €7.5bn of additional funding under the plan would actually be new.

As with the previous commission’s 2015 Juncker Plan, the trick, once again, will be to muster the lion’s share of the quoted sum through a shadow budget administered by the European Investment Bank (EIB). The commission, after all, isn’t allowed to incur debt, but the EU’s intergovernmental rescue and investment funds are.

By the back door
In essence, the EU is doing what the major banks did before the 2008 financial crisis when they circumvented regulation by shifting part of their business to off-balance-sheet conduits and special-purpose vehicles. In the case of the EU, the guarantees offered by the commission and individual EU member states are sufficient for a high credit rating, and thus for the issuance of European debenture bonds. The funds generated will be used for public and private purposes, and sometimes even for public-private partnerships. But should the guarantees be called in one day, eurozone taxpayers will be the ones to foot the bill.

These planned shadow budgets are problematic – not just because they would allow the commission to circumvent a prohibition against borrowing, but also because they implicate the European Central Bank (ECB). To be sure, ECB President Christine Lagarde has already announced that she wants the bank to play a more active role in climate-friendly activities within the eurozone. And the ECB is now considering whether to pursue targeted purchases of bonds issued by institutions that have received the commission’s climate seal of approval.

In practice, of course, this most likely means that the ECB would buy up the green bonds now being devised by the EIB. Those purchases would then reduce the interest rates at which the EIB can take on debt, ultimately leading to activation of the printing press to provide the money for spending on climate policy.

Green around the gills
It is laudable to want to do something about climate change, but under the current plan, the ECB would be pushed into a legal grey area. The institution is not democratically controlled, but rather managed by technocrats on the executive board. Every member state, big or small, appoints its own representative, who then has equal voting rights, personal immunity and the autonomy to operate free from any parliamentary accountability.

It is laudable to want to do something about climate change, but under the current plan, the European Central Bank would be pushed into a legal grey area

Moreover, under the Maastricht Treaty, the ECB board is primarily obligated to maintain price stability and may support separate economic policy measures only if doing so does not endanger its ability to fulfil this mandate. In the case of the Green Deal, the dangers are obvious. If the additional demand created by an expansion of green projects is funded by printing money instead of collecting taxes, it will not withdraw demand from other sectors of the European economy and would, therefore, be potentially inflationary.

Situations like this serve as a reminder of why Article 123 of the Treaty on the Functioning of the European Union strictly prohibits the ECB from taking part in the financing “of union institutions, bodies, offices or agencies, central governments, regional, local, or other public authorities, other bodies governed by public law, or public undertakings of member states”. But, of course, the ECB has already circumvented this rule by purchasing around €2trn in public debt from the market, thereby stretching the limits of its mandate to a legally dubious degree.

A suspicious solution
The latest plans to circumvent the Maastricht Treaty will not improve matters. Before the financial crisis, the ECB was concerned only with monetary policy. During the crisis, it turned into a public bailout authority rescuing near-bankrupt banks and governments. Now, it is becoming an economic government that can print its budget as it sees fit.

The impending violation of the spirit of the Maastricht Treaty will be twofold: the EU will be assuming debt covertly, and it will be doing so through the printing press. As such, the commission’s plans will further undermine the credibility of the very institution on which Europe relies for its financial and macroeconomic stability and its long-term growth prospects – and this at a time when the world is becoming even more uncertain, competitive and aggressive.