What do Juliette Binoche, a French construction company and some of the most famous theatres in Europe have in common? For contemporary dance producer Farooq Chaudhry they are all part of world-class business model created by him to show daring new productions around the world 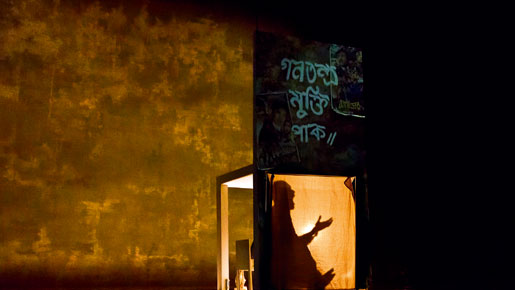 Farooq Chaudhry overcame a turbulent upbringing, including time in care, to become a successful dancer and a world-acclaimed producer for Akram Khan Company. Farooq’s unique ‘cloud commissioning’ business model has proved so effective that it is now taught alongside the business model for Cirque du Soleil at the London Business School as an example of exemplary management.

European CEO got in step with this artistic entrepreneur who is currently touring across Europe with Akram Khan Company’s new work, DESH.

You’ve been referred to as ‘delinquent to dancer’. Tell us more about your journey to where you are today and how your experiences have shaped you as a person.
I was born in Pakistan, but grew up in London in the sixties, which was a difficult time for immigrant families like mine. My family crumbled under the strain and I quickly found myself part of a local gang. By 14 years old, I was so out of control that I was put in the care of social services. Fortunately I was placed in a therapeutic community called Peper Harrow, where my potential was nurtured. One remarkable social worker in particular saw something special in me: her support taught me to have an absolute faith in my instincts.

A trip to Sadler’s Wells Theatre when I was 17 years-old to watch a modern dance company changed my life forever. I was captivated and instantly fell in love with dance. Fast-forward through a 14-year career as a professional dancer and an MA in Arts Management and I am now the dance producer of one of the world’s most successful choreographers and performers, Akram Khan.

Contemporary dance is not the most obvious path away from a troubled upbringing. What drew you towards dance and why are you so passionate about it?
Dance is everything to me. It gives me an astonishing sense of liberation and dance also instils an almost martial discipline. Discipline is a dancer’s most transferrable skill when they retire as it often underpins their success in other professions.

When did you first meet Akram Khan and what made you create the company?
I first saw Akram Khan on stage in 1999. I was enthralled and inspired by his movement language and ferocious talent. We arranged to meet. It was to be a moment that would define both our careers. At that time we had no idea where it would lead, but my instincts told me it would be daring and exciting. We co-founded Akram Khan Company to create thoughtful, provocative and ambitious dance for the international stage that would take our audience on unique journeys across boundaries.

Juliette Binoche, Sylvie Guillem, Kylie Minogue, Anthony Gormley and Anish Kapoor are some of the stars that you have worked with. Oscar winners, pop-stars, ballerinas and sculptors are not normally associated with contemporary dance – how did these partnerships come about?
Successful artists often have a desire to experiment and take risks in unfamiliar and alien territories. We’ve sought out these people because we wanted to work with the best and challenge ourselves with collaborations that would push us. Contemporary dance lends itself well to collaborations with other disciplines because it doesn’t have an agenda. No one knows where it will lead them and it often produces unexpected results. That’s good for us, and it’s good for audiences too.

You’re at the top of your game. Were there times you thought you wouldn’t get there?
To be honest, I never ever think about being at the top, middle or bottom. I’m not interested in protecting my position or status. That’s boring and takes up way too much energy. I want to work as hard as I possibly can without losing the pleasure that it can give me. I need to keep surprising myself and keep my curiosity alive. I don’t fear mistakes because this is where the most beautiful and profound ideas originate. I guess my biggest anxiety would be that our work becomes irrelevant. If that happens I’ll take it as a sign to stop and change direction.

Your new production DESH has been funded through co-producing and ‘Cloud Commissioning’ – tell us what this means.
We are in the very fortunate position of having grown a world-class reputation and brand. This has made us a magnet for co-production with international powerhouses of arts and culture from all over the world. The return for funding is an exclusive relationship, which often means that partners get the national premieres and the prestige that comes with that. This year we engineered a different kind of co-production model. We call this ‘cloud commissioning.’

In essence this is a more formally structured co-operation between two to three international partners over a longer period of time. This ensures that financial and technical resources are pooled between the partners in a more flexible arrangement and allows research and development as well as the creation of actual work. The first international co-operation is between ourselves, Sadler’s Wells theatre and MC2: Grenoble for a period of three years. The beauty of this is that there is less pressure on a single partner and the co-producers have more dialogue with each other. It’s the archetypal situation of being greater than the sum of the parts.

Is this way of working the future for the arts and entertainment world across Europe?
With the current global economic frailty I would say the need to cultivate and sustain these sorts of relationships has never been greater. We need to support each other’s needs so we can remain confident of producing great work. Without that we could face a kind of “cultural recession.” Then the twin evils of mediocrity and predictability will bear down on us. Heaven forbid.

You’ve worked with a glittering array of stars and staged internationally acclaimed productions from London to Hong Kong. Where will you be setting your sights next?
We will be launching an independent commercial arm called Akram Khan Asia in Singapore next year. It will produce high-quality commercial productions, which we hope will eventually be installed on Broadway or London’s West End. We already have the film director Danny Boyle on board to co-direct our first show alongside Akram.

DESH is touring across Europe. Dates and tickets at www.akramkhancompany.net