Michael Ma moves through life with a dynamism, creativity, environmental philosophy and social consciousness that is encapsulated in the IndoChine Group’s ethic and philosophy for its bars, restaurants, clubs, villas and resorts 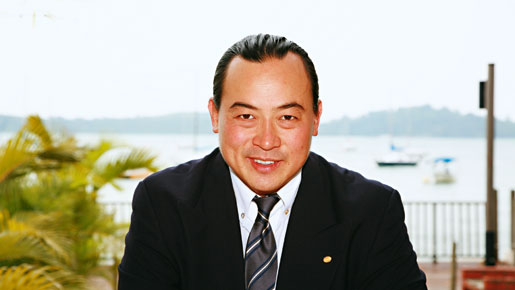 Michael Ma is an inspirational leader as well as a friend to top politicians, business leaders, royalty and celebrities from all around the world. The man behind IndoChine’s nutraceutical cuisine and world-class international entertainment, he is the brain behind its “green” philosophy and social contract with the community – earning him and his company numerous awards.

“I like to push all barriers of influence through our cuisine, restaurant designs, our contemporary lifestyle concept, and our commitment to environmental sustainability and entertainment that reaches all age groups. IndoChine must stay ahead of the game. We do this by constantly refreshing ourselves, by being consistent. We strive to be the best at everything we do, or it is not worth doing in the first place.”

Early days of inspiration
Born in 1969 to Teochew parents in Laos, a Mekong country from which he draws inspiration for IndoChine’s unique nutraceutical cuisine (Vietnam and Cambodia are the others), Michael left Laos with his family after their home was all but destroyed by the devastating war wrecking Laos at the time.

Migration to Sydney, Australia was good for the family, which prospered through a food import business. Michael graduated from the University of Wollongong with a double major in economics and marketing, two disciplines that served him well in launching and growing IndoChine Group. A stint as a commodities trader followed. But the life of an entrepreneur beckoned.

In 1999 Michael opened his first IndoChine restaurant, IndoChine Club Street in Singapore, a combination of Asian lifestyle and colonial influences inspired by his Asian upbringing. Growth, driven by Michael’s energy and innovation, was rapid. By 2010 IndoChine Group had eleven restaurants in Singapore as well as in Hamburg, Germany; Jakarta, Indonesia and Phuket, Thailand.

A food philosophy like no other
All of the outlets follow a consistent IndoChine food philosophy. At its centre is nutraceutical cuisine, which is healthy with cardio benefits, sourced from Indo-China, specifically the Mekong countries of his native Laos, Cambodia and Vietnam, which influence IndoChine’s restaurants, resulting in a dining experience unmatched anywhere else.

Royalty et al
People from all walks of life are big fans. IndoChine is now the “go to” venue for numerous celebrities, members of European and English royalty as well as heads of state when in Singapore. Michael has personally hosted and befriended famous guests, such as His Royal Highness Prince Albert II of Monaco; Princess Ann of England; former Prime Minister of Singapore Lee Kuan Yew; former Soviet President Mikhail Gorbechev; British entrepreneur Richard Branson of Virgin Group; soccer legend David Beckham and his wife, Victoria; Mariah Carey; Beyoncé; Sting; INXS and many others.

But Michael’s life by no means revolves around hosting famous guests and parties. He has extended the business partnership theme into strong support for a number of Corporate Social Responsibility (CSR) projects, including helping the Tsunami Relief Fund after the Indonesian tsunami of 2004, funds for victims of the Bali bombing in Indonesia, helping Burmese refugees, the Singapore Red Cross, Action for Aids, Milk [Mainly I Love Kids], the Viva Children Cancer Foundation, the Halogen Foundation and Developmental Alternatives.

Michael Ma’s adherence to environmental sustainability does not just stop at his insistence that certain species and fauna are not to be used in his restaurants (shark fin soup, blue fin and yellow fin tuna and caviar are off the menu, plus a number of others). His fervour for conservation is evident in the design and environmentally friendly materials used in the restaurants, often at a higher cost.

Michael also serves on a number of advisory boards to share his experiences. He has served as President of the Spirit of Enterprise, which promotes and advances entrepreneurial spirit in Singapore; on the Singapore F1 Grand Prix working committee to help establish Formula One’s first night race in Asia; he is a council member of the STB Tourism Consultative Council (TCC); the Singapore government’s Action Community for Entrepreneurship (ACE); and a member of GEMS (Go the Extra Mile), a campaign to push service standards in Singapore to an international level.

Something a little different
Capturing his creative approach to company integration, Michael started Lotus Limousines, featuring a deluxe Chrysler 300C super stretch limousine, the first − and only in Singapore − to show guests around the Lion City in style and comfort, previously unavailable for bigger groups of the rich and famous.
For a young man who had to flee his native Laos with his family, Michael Ma has come to epitomise the quintessential Asian entrepreneur. Visionary, hard-working, driven, creative – a consummate risk taker and businessman in the Richard Branson mould, who settles for nothing but the best.