In 1967, Nicholas Logsdail opened the first Lisson Gallery, a central London space that championed contemporary art in a way that was yet to be seen in the UK at the time. Forty-four years on and he’s gone international. Jo Caird investigates 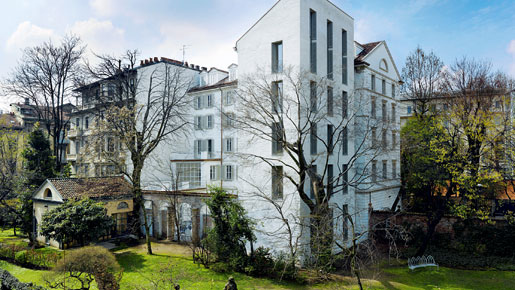 One of the most respected names in art dealership, Nicholas Logsdail represents the likes of Ai Weiwei, Tony Cragg and Anish Kapoor. His UK venue, the Lisson gallery, now has a sister venue abroad, with the opening last September of a beautiful new European base, the Lisson Gallery Milan. Logsdail and his team have been mulling over such a step for some time, but were in no hurry to “jump in at the deep end along with everybody else”. Instead he has spent the past several years observing how similar ventures have taken off – or not – in cities such as Paris and Berlin.

The decision to set up in Milan was in no small way influenced by the presence there of Annette Hoffman, a trusted member of the Lisson team who relocated to the city in 2006 after eight years working with the gallery in London. Hoffman was instrumental in bringing the space on the via Zenale – a 1901 building adjacent to the 15th-century Palazzo degli Atellani, where Leonardo da Vinci lived while working on The Last Supper – to Logsdail’s attention. She now directs the new gallery’s small team.

Anglo-Italian relations
Milan was felt to be particularly suitable for a number of reasons. The city occupies a prominent position in the worlds of Italian art and fashion; is a convenient distance from France, Germany and Switzerland, all important markets for Lisson; and already boasts a significant number of high-profile collectors of contemporary art.

Logsdail also identifies a certain sympathy between Britain and Italy, a state of affairs that can do no harm to the development of the sorts of relationships necessary for the success of the gallery. “The Italians like the British and we like them, it’s the attraction of opposites: they’re fiery and Latin and we’re English and reserved.” Lisson, in fact, has a long history of working with Italian collectors, including notable figures such as Giuseppe Panza di Biumo, Patrizia Sandretto, and Miuccia Prada and her husband, Patrizio Bertelli.

Talking to me in the sleek surroundings of the Lisson Gallery at 52-54 Bell Street – they have a second space just down the road – Logsdail explains that Italy has an “enormously long tradition of collecting and connoisseurship”. This tradition, which the gallerist suggests dates back as far as the final days of the Renaissance, has been passed down through generations of Italian families, a practice enabled by the fact that Italian inheritance tax on property has been historically either non-existent or negligible. “Little details like this started popping up once we started focusing on [Milan]”, says Logsdail. “It started ticking so many boxes that nobody had looked at”.

A holistic approach
Timing has also been significant in terms of the development of the business. In the current economic climate, with interest rates hovering just above zero and currency and stock markets in disarray, collecting offers a greater sense of security than many other investment options. “[An artwork] is not a piece a paper, you’ve actually got it on your wall or in your house… I think that art is seen as a totally different kind of asset class. It is something that you can become engaged with. You can develop your own scholarship.”

The massive technological advances of the last 15 years have also played a significant role in the growth of collecting during this period, “turn[ing] the contemporary art business into a global market”. Not only is it now easier than ever before to do business with both international clients and the artists whose work they are buying, but the internet has also effectively democratised the process of collecting, putting knowledge, and therefore power, directly into the hands of collectors. It’s a state of affairs for which Logsdail has nothing but praise. “You can go online and check everything. So if somebody’s trying to lead you up the garden path, you’re going to find out very quickly. A gallery doesn’t stay in business by misleading people, it stays in business by doing the right thing and being very honourable and correct with the people it works with, both the artists and the clients”.

Best brush forward
Artist development is central to Lisson’s ethos: since its foundation the gallery has sought to build its artists’ careers through relationships with museums and the media, as well as with the international collecting community. The success of this long-termist, quality-focused approach is clear to see, with many of Logsdail’s original artists, those who came on board in the early days of the gallery, having achieved recognition as the most influential and collectible names in contemporary art. “Many galleries”, says Logsdail, “look at artists and say, ‘can we make any money there? Forget everything else, if we can make money let’s go for it’. We don’t look at it like that. We believe that if you’ve got the quality, money will follow”.

It is likely that the Lisson’s new Milan outpost will eventually lead to the gallery taking on more artists – Logsdail acknowledges that an increase in Italian names would be “a very natural consequence” of the expansion – but there are no immediate plans to add to Lisson’s 40-strong roster at this stage. The dealer is more interested for the moment in the new gallery functioning as an additional platform for the artists already on Lisson’s books, one that will offer a different context in which to show their work to a wider range of potential buyers.

As one would expect of a man who has built his business from scratch to become one of the most trusted names in contemporary art, Logsdail is taking this next stage in Lisson’s development very much in his stride. The gallerist’s clear-thinking approach aside though, he does let slip that Lisson Gallery Milan is not just a matter of pragmatism: “it’s also an opportunity to have new adventures”.