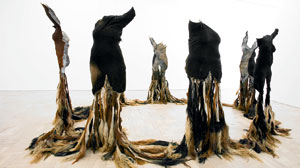 Bringing together works by more than 30 international artists at KIASMA in Helsinki, as well as at satellite exhibitions throughout Finland, the idea behind the show, says curator Jari-Pekkla Vanhala, is to “refresh the image of Africa that people have. There are certain stereotypes of African art. It seems like it’s some kind of block, that you can’t get anything new out of it.” ARS 11 is a concerted move away from the clichéd and tired approach to representations of the continent that reference “mud huts”, “afro hair” and “textile work” and ignore its more contemporary, urban concerns.

The artists selected to take part, some of whom will be creating new work for the show, some of whom will be contributing extant pieces, have mostly been given carte blanche when it comes to choosing which topics to address. But when Vanhala and his colleagues, KIASMA director Pirkko Siitari and chief curator Arja Miller, began the selection process, they were most interested in those whose work reflects the “contemporaneity” of African life, in all its 21st-century diversity, rather than that which dwells on the past.

They were also keen to give voice to a younger generation of artists for whom ‘Africa is a cultural influence’. Vanhala explains that this influence comes through in “the fashion and the music and all these kind of things, not only this pessimistic view of the poor and the dying, the wars and things like this.”

One of the ARS 11 participants that Vanhala is particularly excited about is the Nigerian new media artist, Emeka Ogboh, who will be presenting his ongoing sound installation project, ‘Lagos Soundscapes’ inside the museum and in the streets outside.

The project involves playing field recordings made in Abuja; the work maps the relationship between Lagos residents and the sounds generated by the metropolis. Playing the soundscapes in Helsinki adds another dimension, throwing up questions around immigration and globalisation. Ogboh is interested in how “a predominantly Finnish public [will] react to a subversive disorder that is out of place in a seemingly well-organised Western society? How will they consume what is obviously foreign? Will ‘Lagos Soundscapes’ be aurally consumed as exotic, accepted as harmless strangeness or dealt with the strong force of rejection?”

There is no ‘correct’ response to this project; the idea, as with Vanhala’s vision of ARS 11 as a whole, is to provoke visitors to the show — and those who just happen to be wandering past — to consider their preconceptions about Africa and its relationship with the rest of the world. Another artist taking part is Zambian-born Baaba Jakeh Chande, who will also be presenting work from an ongoing series. Chande’s practice ranges from sculpture and site-specific installations to performance art, reflecting not just life in Zambia, but also his more recent experience of living and working in Helsinki.

For ARS 11, he will be showing work from a series that engages with the conflict between people and the natural environment. By ‘dressing’ the trees in the immediate vicinity of the museum in red cloth, Chande aims to draw attention to the unchanging nature of the environment in the face of humanity’s ongoing development: we alter ourselves and our urban environments to suit our needs, yet nature remains more or less the same, free from the ‘civilising’ influences of modern paraphernalia. Chande’s piece questions these notions, as well as highlighting the “imminent dangers faced by the environment” as a consequence of consumerist culture and climate change.

Vanhala notes that ARS 11 is not the only recent exploration of African art in Finland; in the last year there have been several different shows focusing on the continent’s visual arts culture, as well as schemes facilitating residencies in Africa for Finnish artists.

This new wave is a consequence, says the curator, not just of the increased visibility of African communities in Finland as immigration brings refugees from Somalia and DRC, but also of the growing economic ties with African nations as a result of Nokia’s role in the market places of the developing world.

“The young generation”, Vanhala concludes, “they have a real interest to know what is Africa, contemporary Africa now; they travel a lot and it’s a kind of new interest. But our exhibition will be the first one [with] a new, broader perspective [on] contemporary art, so we forget all these clichés and traditional things and just go with the contemporary”.

ARS 11 is running at KIASMA, Helsinki, Finland from 15 April to 27 November. www.kiasma.fi

Figures and Fictions: Contemporary South African Photography
The focus here in on South African photography of the last 10 years. The exhibition features 150 works by 17 photographers, from established names such as Santu Mofokeng and David Goldblatt to newcomers like the Essop twins and the lesbian artist and activist Zanele Muholi. Expect to see artists engaging with a wide range of issues affecting post-apartheid South Africa.

Yto Barrada
Deutsche Bank’s ‘Artist of the Year’, Paris-born Yto Barrada, was educated in Tangier, Morocco and lives and works there today. Her photography, video and installation work addresses shifting boundaries, whether political, economic or cultural. As well as working as an artist, she is artistic director and co-founder of Cinématèque de Tanger, North Africa’s first cultural cinema centre.

Dogon
This show at Europe’s foremost museum of indigenous art won’t fail to impress. Over 300 objects, including statuary, textiles and masques have been brought together to illustrate 10 centuries of Dogon tribal life. Hailing from Mali, West Africa, the Dogon people have seen their culture enriched by waves of migration and ancient trading routes, making for a hugely vibrant artistic tradition. The show displays objects from day-to-day life alongside works of art and multimedia installations to educate visitors about the ways that the West first became aware of this extraordinary culture.