As luxury British accessories brand Lulu Guinness celebrates yet another profitable year, the CEO Martin Mason talks to Marisa Bell about plans for brand growth and expansion in Asia 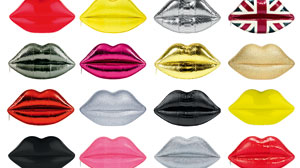 Launched in 1989 from the basement of her Notting Hill home in London, Lulu Guinness remains as much at the forefront of her eponymous label as she always has been. Despite   evident commercial success — the brand has stores in London, New York, two in Japan and a presence in around 200 hundred department stores worldwide — the core company values have remained unchanged since Guinness set up her business over twenty years ago. Creativity, originality and individuality are all fundamental to brand design.

Guinness may have no technical training but what makes her pieces so popular are her personality and influence which are clear in every style that the label produces.  “I like to inject humour into my designs,” she comments, “Lulu Guinness is a personality brand.  We always have an element of humour in all our designs – it is important not to take fashion too seriously and give our customers what they want.” The company’s success has shown that she clearly knows and understands her market and last year saw the brand made a pre-tax profit on a turnover of £3.6m – not bad for a luxury brand during a recession.

Guinness’ whimsically eclectic creations have taken on many guises over the years but perhaps the most famous are her Lips collection clutch bags and the Florist Baskets. Of her inspiration for the latter she remarks: “I remember thinking how great it would be if you could carry a vase of roses around with you all the time.” The sources of Guinness’ ideas are widespread and have not only led to her successfully retailing countless styles, but her designs have also featured in museum exhibitions and have been showcased twice at Sotheby’s – once in London and once in New York. Two pieces also form part of the permanent collection at the Victoria and Albert Museum in London and have frequently been referred to as ‘tomorrow’s treasures’ and ‘portable works of art.”

Guinness’ original idea was to produce a range of handbags that reflect her quirky vintage style. The brand has since grown and expanded over the years to include a whole range of additional products. From shoes to umbrellas, sunglasses to fragrances and bed linen, the merchandise produced under the numerous licensing deals signed by the company all bear Guinness’ trademark style and signature design. Martin Mason, CEO of Lulu Guinness confirms the importance of brand consistency by saying that while ‘licensing provides a significant opportunity to extend a brand into new product categories and to new customers, successful licensing is dependent upon a stringent approval process and complete trust between licensor and licensee so that the brand is not compromised. As licensor we maintain complete control of the design process and distribution.’

Well schooled in British heritage and luxury brands, Mason joined Lulu Guinness in early 2009. Having started out his career in banking, Mason subsequently moved over to work with luxury brands and has spent the past fifteen years working with the likes of Mulberry, Tanner Krolle and Pringle of Scotland. Mason also has extensive experience working in Asia and facilitating deals across the region. It is this experience that has helped to drive forward Lulu Guinness in Asia – an important market for the brand and one where the company is keen to expand.

Mason confirms that, “having built a strong business in Japan for more than ten years, opening up the other key Asian markets is a primary target for us. In 2009, shortly after Mason joined Lulu Guinness, the company signed an agreement with leading Hong Kong based investment group First Eastern. This deal saw the group acquire a 15 percent stake in Lulu Guinness and the set up of an agreement to form a 50 percent joint venture to expand the brand across Asia, ex-Japan. First Eastern’s extensive experience across the region coupled with their strong network of contacts, have been a real asset to Lulu Guinness. The success of the deal is already clear and Mason is quick to point out that, “In the nine months since the partnership with First Eastern was formed, it has been confirmed that we will be opening five Lulu Guinness locations in South Korea over five years, the first by the end of 2011. We will also be opening a flagship store in Kuala Lumpur in early 2012 with plans to expand the network of stores through Malaysia and Singapore.”

China is also on the hit list for Asian expansion. Mason believes that, “China is a particularly exciting emerging market where the booming middle class in cities like Shanghai represent huge opportunity.” He confirms that the brand is, “close to signing a significant deal for China and will be spending time travelling in the region with Lulu during 2011 to kick start the PR and marketing campaigns.” Markets closer to home have also seen change with the introduction of fresh product and the unveiling of new licensing deals. This summer sees the global launch at Harrods of the long awaited Lulu Guinness luggage and travel goods range followed by the first watch collection for Christmas 2011.

Elsewhere, Lulu Guinness is looking to increase distribution in Russia and the Middle East, but for now, Asia is undoubtedly where brand growth is most strongly focused.

Although the last couple of years have been tough across luxury industries, Lulu Guinness has survived and profited from steady sales. It certainly helps that the company has an established brand name but Guinness believes that ‘we always do well in a recession because we are a feel good brand with witty designs.’ This may be true, but what has been equally important throughout the recent tough economic period is Lulu Guinness’ continued ability to maintain consumer confidence. Manufacturing quality goods that offer genuine value for money in their retail price bracket has been key. Mason’s plans for company growth and his foresight to seek new opportunities in foreign markets have also been vital and helped to successfully secure the brand’s future.