It was nearly 25 years ago that the bright future of nuclear energy came to an abrupt end, or so much of the industry thought at the time 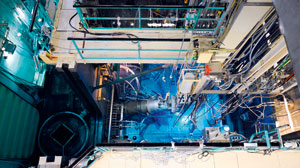 On April 26, 1986, the Chernobyl nuclear power plant in Ukraine, then part of the Soviet Union, suffered a level seven event on the official scale. No failure in a nuclear station had reached such a level, before or since.

The seeming death-knell of nuclear energy began when such an extreme spike occurred in power output during a systems check that a reactor vessel erupted, triggering a series of explosions. A cloud of highly radioactive emissions spread out from Chernobyl, rising high into the air and drifting over vast areas of the Soviet Union, eastern, western and northern Europe. Many thousands of Soviet citizens fled large areas of Ukraine, neighbouring Belarus and Russia. As the toxic plume floated over some of Europe’s biggest cities, there were widespread concerns it could cause thousands of deaths.

An investigation 20 years later by the Chernobyl Forum under the auspices of the World Health Organisation (WHO) concluded that at least some of those fears were substantially realised. About 30 members of the 134-strong emergency team at Chernobyl were found to have died directly as a result of the disaster, mainly from acute radiation syndrome or related illnesses, and a total of 4,000, subsequent cancer-related deaths are attributed to the disaster.

Concluded the WHO report: “The health effects of the accident were potentially horrific, but when you add them up using validated conclusions from good science, the public health effects were not nearly as substantial as had at first been feared.”

But this report was still years away and, for many, Chernobyl marked the end of nuclear energy because it followed a partial meltdown seven years earlier at the Three Mile Island nuclear plant near Harrisburg, Pennsylvania. Although nobody died in that accident, an alarmed anti-nuclear lobby sprung up in the United States that blocked – or at least slowed – the development of what had been seen as an exciting alternative to oil and gas. Between 1975 and 1980, a total of 63 nuclear units were cancelled in the US.

The comeback
And today? Nuclear power has made such a spectacular recovery from the horrors of Chernobyl that we are said to be on the brink of a “nuclear renaissance”. No less than 31 countries operate nuclear power plants across most of the world. Last year, not a single reactor was closed down and new reactors started up commercial production in Russia, India, South Korea and China, according to the World Nuclear Association.

The next few years look even brighter. In 2010 the first sod was turned in 13 new nuclear projects, meaning that new reactors will be firing up at the rate of one a month by 2015. Energy-hungry China accounted for eight of these followed by Russia (2), India (2), and Brazil (1). According to the International Atomic Energy Agency’s database, the last time anything on this scale happened was in 1990 when ten new reactors were started.

So how did the industry rise from the dead? The truth is that it never died; indeed even the undamaged part of Chernobyl stayed in operation, although it was little known at the time, and the plant was not formally shut down until 2000. Nuclear power did however go through a long period of stagnation that may in fact have started before Chernobyl.

Nuclear fission gains credibility
But first, the origins of nuclear power. Its potential had been recognised more than a century ago and generations of scientists worked on it, including Albert Einstein who wrote a landmark paper in 1905 on the equivalence between mass and energy, the basic principle behind nuclear fission. In Russia, scientists were working on nuclear physics ten years before the revolution.

But as a form of energy, as distinct from a weapon of war, nuclear fission only attracted serious attention from 1945 when it was recognised it could power battleships and light entire cities. Giant American firms such as Westinghouse (now owned by Toshiba) and General Electric developed the first fully commercial reactors in the US from as early as 1960 and Westinghouse’s first plant, at Yankee Row, would run for the next 32 years.
But the Soviet Union beat the United States to it. With the race for nuclear power being seen as part of the Cold-War, Josef Stalin opened a plant in 1954, the first in history to produce electricity.

Yet even before Chernobyl, the advance of nuclear power was already starting to slow. Between the mid-eighties and 2002, nuclear power accounted for a “fairly constant” 16-17 percent of world electricity production. In short, stagnation. According to industry-watchers, a contributing reason for this was that the benefits of nuclear power had been oversold, with its backers claiming the energy would be so plentiful it would be “too cheap to meter.”

Nor did the terrorist attacks on the Twin Towers in downtown New York on September 11, 2001 do anything for the cause. Until then, plants had been designed to withstand only the crash of a light aircraft, not a fully-loaded commercial jet. As the International Atomic Energy Agency, a promoter of nuclear power, noted at the time: “Most nuclear power plants were built during the 1960s and 1970s, and like the World Trade Center, they were designed to withstand only accidental impacts from the small ‘Cessna’- type sports aircraft. If you postulate the risk of a jumbo jet full of fuel, it is clear that their design was not conceived to withstand such an impact.”

The renaissance
However a series of events conspired to revive nuclear power . According to the Nuclear Energy Association, the comeback is driven by three factors – the runaway demand for energy, especially in fast-industrialising countries such as China and South Korea, governments’ fears that they may become dependent on other nations’ surplus energy, and the fear of the planet’s climate being destroyed by the burning of fossil fuels.

Accidents aside, nuclear energy is regarded as kind to the environment. However that discounts the problem of the disposal of highly toxic, nuclear waste which has a half-life of 10,000 years. Although president Ronald Regan, an advocate of nuclear power, once said that “all the waste in a year from a nuclear power plant can be stored under a desk,” nobody would want it under their feet.

The arrival of more advanced technology from 2004 in the form of late third-generation reactors, a longer working life and more energy per capacity, also kick-started the renaissance. Finland was one of the first countries off the block.

Today over 100 plants supply about 20 percent of America’s electricity. Indeed the defeated Republican candidate John McCain campaigned in part on boosting the supply of “safe and clean” nuclear energy through the construction of 45 more plants within 20 years at a cost of $6bn-$7bn per plant.

And despite Chernobyl, Russia never really lost its faith in nuclear power and restarted up in earnest from 2000. Last year, it formally adopted a 40-year strategy to develop fast reactors and sell them around the world.

A new nuclear elite
But there’s a lot of competition in nuclear intellectual property. Other energy-hungry nations, especially in east Asia, are putting their faith in reactors and developing world-class technology. South Korea is well down the road to joining the nuclear elite, with 21 plants delivering nearly 40 percent of its total electricity supply at present. The target is 60 percent by 2030. Already the nation is competing for – and winning – big-ticket contracts such as the recent $20bn deal to supply four reactors for United Arab Emirates. According to South Korea’s Ministry of Knowledge Economy, nuclear know-how will become one of its major export earners. “Nuclear power-related business will be the most profitable market after automobiles, semiconductors and shipbuilding,” it predicted last year.

A nation of scientists, India is on a similar path. “India has a vision of becoming a world leader in nuclear technology due to its expertise in fast reactors and thorium fuel cycle”, notes the World Nuclear Association. In the pipeline is a $21.8bn “nuclear park” in Maharashtra province.

But of all Asian nations, it’s China that has become the main cheerleader for nuclear power. Initially drawing on science from America, France and Russia, it is rapidly developing its own in-house technology with the aid of the deepest of deep pockets. Last September, the China Daily reported that the China National Nuclear Corporation has earmarked a $120bn budget for investment in nuclear energy between now and 2020.
Indeed China’s enthusiasm for nuclear energy knows no bounds. The Heavenly Kingdom plans to increase its nuclear capacity six-fold between now and 2020 through the addition of a further 100 large units to its fleet.

In Europe, France is the runaway leader. It embarked nearly 40 years ago on a strategy of achieving as much independence in power supply as it possibly could – and that meant nuclear power. Today France derives over three quarters of all its power from its 58 reactors and is the world’s largest exporter of electricity, banking some €3bn a year from the trade. Right now, French scientists are working on a fourth-generation reactor due to start up by 2020 and has signed a $9bn contract to supply its know-how to India.

Doubts remain
Despite the nuclear renaissance, there’s still a powerful lobby against nuclear power for two reasons. One is the risk of another Chernobyl. The other is the 10,000-year problem of waste disposal. As Dan Becker, director of global warming for the Sierra Club – a believer in renewable energy, has said: “Switching from dirty coal plants to dangerous nuclear power is like giving up smoking cigarettes and taking up crack.”

And sceptics claim that risk-free renewables such as wind power will eventually provide all the energy we want. By the time we know that, or not, there will be hundreds of new nuclear plants in action.