Hieronymus Bosch: the mysterious master of the surreal 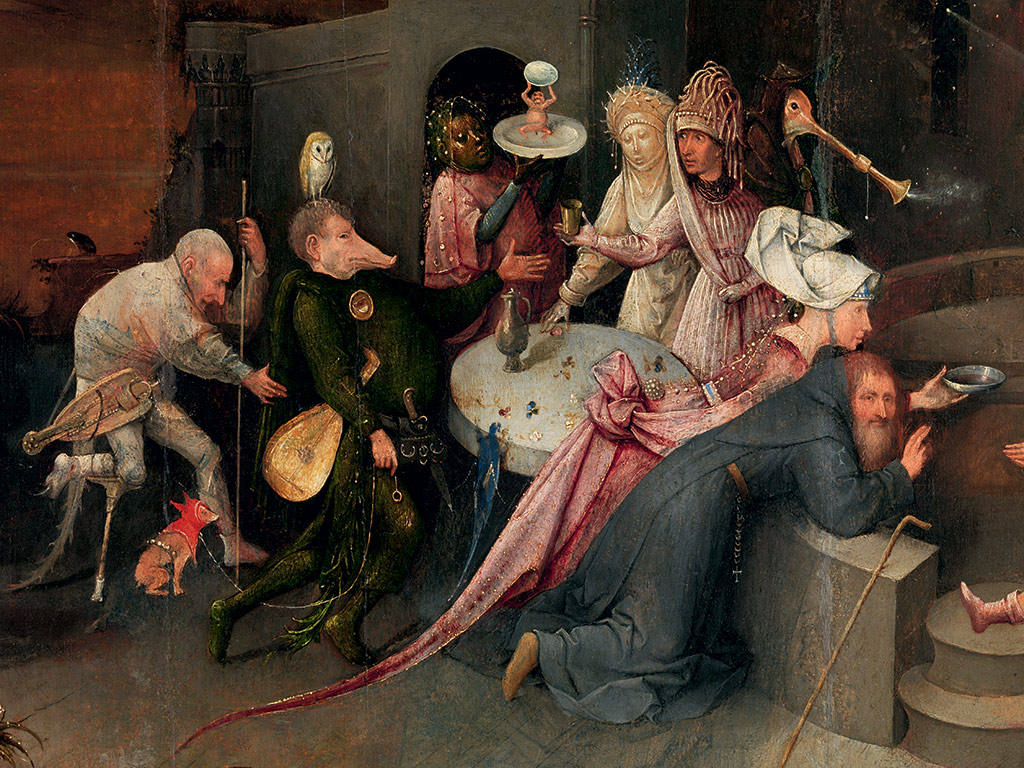 It’s 500 years on and we’re still no closer to understanding the personal circumstances that inspired Hieronymus Bosch’s often-macabre visualisations of the strange, the biblical and the mundane. As few as 20 paintings and eight drawings of Bosch’s oeuvre remain today, and even his date of birth is a matter of speculation.

However, there are few artists so widely recognised and respected as he. The term ‘recognised’ here is a relative one, given that the only indication of Bosch’s appearance is a sketch drawn shortly before his death in 1516. The artist’s details are muddy at best, although most agree he spent his life in ‘s-Hertogenbosch, capital of the Dutch province of North Brubant and the city from which his name is derived.

Bosch was likely influenced by his painterly lineage, particularly his grandfather Jan van Aken, who was a painter himself and passed the craft on to four of his five sons. Bosch’s father, Anthonius van Aken acted as an artistic advisor for the Brotherhood of Our Lady, a catholic fraternity founded in 1318, and it is believed he or one of his painterly brothers tutored Bosch, who was then named Jeroen Anthonissen van Aken.

The fall of man
Regardless of his upbringing and personal circumstances, it seems Bosch was unconvinced by mankind’s inherent capacity to do good. Instead, he saw humanity as a monstrosity – a radical standpoint, in his day. His paintings clearly indicate this philosophy. Bosch’s work contrasted sharply with the traditional Flemish style, which tended towards a smoother finish and consisted largely of portraiture, landscape and still life. Bosch’s pictures were unusual in their composition and depicted fantastical and surreal scenes.

Bosch was a moralist and didn’t believe in showing things as they appeared. His fantastical imagery earned him the nickname ‘the creator of devils’

This style is best evidenced in his most iconic work, The Garden of Earthly Delights. The painting, one of his many triptychs, showcases Bosch’s sketchy brushwork in depictions of otherworldly creatures and religious abominations. The Flemish artist and writer Karel van Mander wrote of the painting: “Who will be able to tell of all the weird and strange ideas which were in the mind of Jeronimus Bos, and his expressions of them by his brush? He painted gruesome pictures.”

Alongside The Garden of Earthly Delights came The Temptation of St Anthony, another triptych featuring a popular medieval subject – Saint Anthony the Great – albeit in an untraditional fashion, as Bosch depicted in minute detail the aching pains of temptation using dark and surreal themes. Philip II of Spain acquired works by Bosch in the late sixteenth century, and many of these have remained in his homeland. Although original works are extremely rare, the Prado Museum in Madrid houses The Adoration of the Magi, The Seven Deadly Sins and the Four Last Things, The Haywain Triptych, The Stone Operation and the iconic Garden of Earthly Delights.

Mixed interpretations
Bosch was a moralist and didn’t believe in showing things as they appeared. His fantastical imagery earned him the nickname ‘the creator of devils’. Interpretations of his work are extraordinarily wide-ranging and rarely fall into one school of thought. “Bosch wished to warn his time of the dangers it was running by yielding to the devil,” wrote the art critic and historian Joseph-Emile Muller.

Historian Walter Gibson described his pictures as: “A world of dreams [and] nightmares in which forms seem to flicker and change before our eyes.” Bosch’s creations were riddled with symbolism, but the meanings are yet to be deciphered, and in all likelihood will never be. Whereas many believe he was critical of mankind’s capacity for good, others see his art as satirical. No matter the interpretation, there is a wealth of content to pore over in each of Bosch’s works.

The artist’s work has been influential in the development of artistic movements decades and, in some cases, centuries later; Bosch really was ahead of his time. Most notably Bosch’s work is seen as a vital precursor to surrealism and, 400 years on from his death, some have gone so far as to crown him the first surrealist. In a period where the artistic consensus was one of realism, Bosch put together pictures that were positively dreamlike.

Here lies the justification for a new publication from TASCHEN, entitled Hieronymus Bosch: The Complete Works, which dedicates 300 pages to the artist’s work and includes a 43-inch foldout of The Garden of Earthly Delights. “Bosch’s paintings are populated with grotesque scenes of fantastical creatures succumbing to all manner of human desire, fantasy, and angst,” writes the publisher.

Regardless of Bosch’s artistic intentions, the Dutchman has been a highly influential figure in the evolution of European art and justifiably ranks among the most well-respected artists of today.