With car advertisements becoming increasingly elaborate and progressively more expensive, it’s worth reflecting on how the medium found its feet in the first half of the 20th Century 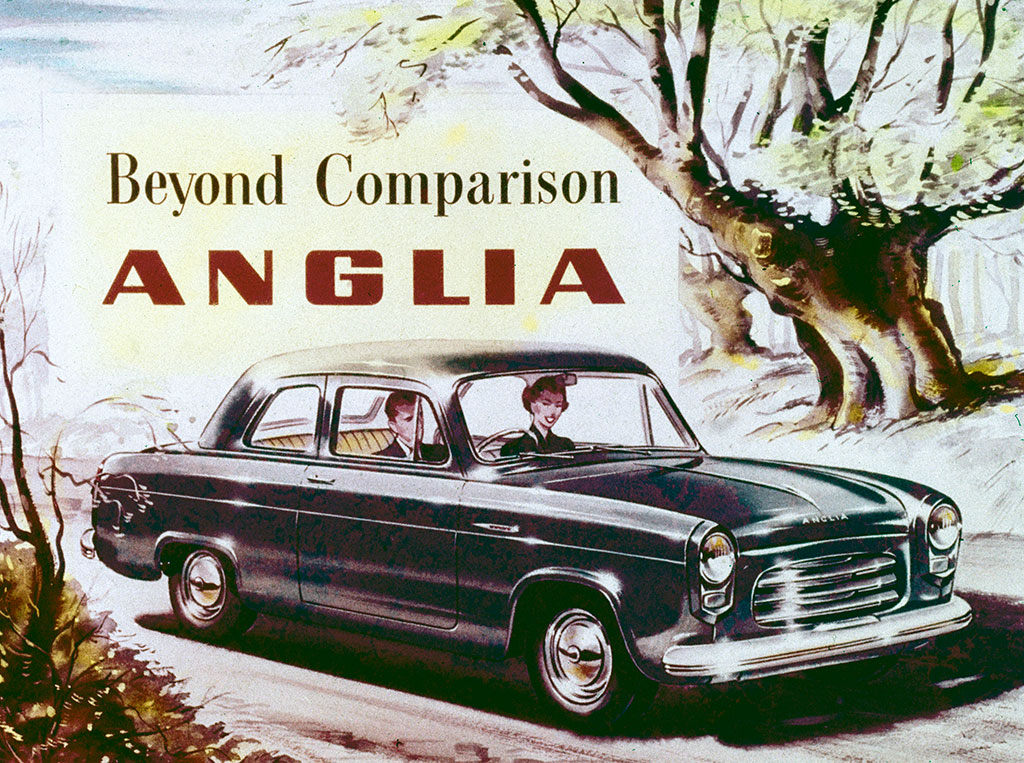 Car adverts have come a long way since the 1920s, but even the likes of Ford and Jaguar had humble beginnings. We take a look at some of the best car adverts from 1920-1950
Lifestyle

From Bentley to Bugatti, it seems every car company these days is more than happy to spend increasing amounts of money on advertising. Often famous for being clever, funny or outrageous, car adverts are becoming ever more ambitious. Recent adverts have called upon Hollywood actors, dramatic special effects, stunning vistas, and cutting-edge CGI. Jaguar’s most recent advert, which debuted during this year’s Super Bowl, starred Mark Strong, Ben Kingsley and Tom Hiddleston taking turns reciting a dramatic monologue about the British propensity to villainy on the big screen.

In 2003, Honda’s ‘The Cog’, a 2 minute advert based around an elaborate Rube Goldberg contraption made out of disassembled parts of the Honda Accord, reportedly caused a £400m (€486m) increase in revenue after it premiered in the UK. The advert won huge critical acclaim, many awards, and it is now described as one of the most influential and pioneering advertisements of the 2000s.

There is, however, a long and elaborate tradition of car advertisements stretching back to the first mass market vehicles. In particular, the societal and cultural upheavals of the 20s, 30s, 40s and 50s stamped their mark on car advertising like no era before or after. Here are some of our favourite classic car adverts. This advertisement is typical of the 1950s and is a result of the rapid car boom that was taking place at the time. It evokes themes of the suburbanisation of America, which in itself was a big driving force for the rapid growth of the automotive industry. Chevrolet attempted to capitalise on the desires that the idea of an American Dream gave to the average Joe – a home, a family, pets and, most importantly, a car. The house itself is in the mid-century modern style and the advert generally replicates the post-war enthusiasm that pervaded society at the time. Founded in 1900, Isotta Fraschini is historically known for creating some of the highest quality luxury cars ever made. In the 1920s, perceptive of the growth of the wealthy middle class in North America, the company began to market its deluxe cars to the new American elite. Film stars of the time, such as Rudolph Valentino drove cars produced by the brand, further increasing their appeal. This advertisement uses the image of an alpine scene to add allure and mystique to its product and entice its audience. Isotta Fraschini ended car production in 1949, but continued to produce trucks until 1955. Produced by SS Cars Ltd. of Coventry, the SS100 is widely regarded to be one of the most aesthetically pleasing cars ever made. The company would change its name in 1945 to Jaguar Cars because of the Nazi connotations of ‘SS’, but the car itself remains extremely rare. A recent, perfectly restored model sold at auction for £666,270 (€810,997). The car was so named as the ‘100’ because of its ability to exceed 100 mph – at the time, an astonishing speed for a production vehicle. It was on an SS100 that the now-famous leaping jaguar was first displayed. In 1937 SS Cars slightly revised the jaguar’s design, and it is still used today. Like many others of the time, this Chrysler advert from the 1950s chooses to focus on the features of the car. The ‘Forward Look’ was a design theme the corporation employed from the mid 1950s. Although fins had been present on cars since at least 1948, most notably at Cadillac, Virgil Exner was the pioneer of the new style at Chrysler. He radically altered the design process at the company by taking the responsibility away from the engineers and putting it back in the hands of designers. Exner adopted the now iconic fins in all of his designs, believing in their aerodynamic and aesthetic qualities. This brought the company to the forefront of design, and other companies – including Ford and General Motors – struggled to catch up. By the early 1960s the fins had grown disproportionately large on some designs, and they became a symbol of American excess. Chrysler retired the Forward Look design in 1961 and the popularity of the fin design faded. The Bugatti of the 1930s and 40s was quite different from the current business entity, which was revived in 1990 using the Bugatti name. Founded in 1909 by Ettore Bugatti in Molsheim in the Alsace region, the company rapidly became renowned for the attention to detail paid to every car produced at the factory. The Bugatti T57 that this advert portrays was introduced in 1934 and continued to be made until the outbreak of the Second World War. Bugatti’s fortunes turned just after this was published, first with the tragic death of Ettore’s eldest son, Jean, while he was testing a T57, and then with the forced closure of the Molsheim factory after the German occupation of France. Bugatti struggled after the war, and released one last model in the 1950s. In total, they only ever created approximately 8,000 cars, a testament to the care and time they spent during production. Patriotically named and an icon of the early 20th Century, the Ford Anglia was one of Ford UK’s most popular cars. The model depicted in this advert, the 100E, sold strongly for the company until it was outmoded by the 105E in 1959. The advert takes some artistic licence, exaggerating the size of the car slightly. For the time, the 100E had a modern and stylish design, but had to make do with a relatively old engine, which hampered the acceleration and top speed of the vehicle. Over 1,500,000 Anglias were produced before the car was replaced by the Ford Escort in 1967-1968. The Humber Super Snipe depicted in this advert, was a luxury car that enjoyed almost 30 years of production, from 1938 to 1967. The Rootes brothers acquired a controlling interest in Humber and made it part of the Rootes Group in the early 1930s. The car was mainly marketed to professionals and government officials. The Super Snipe was inexpensive considering its performance – a top speed of 79mph set the car apart from most of its competition. This advert recognises Humber’s aviation roots – the company produced a number of aircraft and aircraft engines before the First World War and, after this advert was produced, they would manufacture more military vehicles. During Second World War, the Humber Super Snipe found a new lease of life as a British military staff car. The chassis was used to make an armoured reconnaissance vehicle, known as the Humber Light Reconnaissance car. This poster, taken from an Airsport catalogue, is a general advertisement for all of Renault’s cars. At the time, Renault was heavily marketing the ‘Grand’ Renaults, so called for their size and luxury qualities. The Grand Renaults were built using a significant amount of aluminium so, unsurprisingly, when war broke out at the end of the decade many were scrapped for the metal. This advertisement is also a subtle nod to Renault’s participation in the First World War. Like many car manufacturers, Renault found itself producing ammunition, military airplanes and the Renault FT tank, considered one of the most influential tank designs in history. The Grand Renaults became outmoded rapidly after the Second World War, when the company was nationalised after Louis Renault, its founder, was accused of collaborating with the Germans. This magazine advertisement was produced by Ford to highlight the introduction of a new Ford engine in English-made cars. Highlighting the benefits a Ford engine could bring to a car and by framing the advert in the setting of a social gathering for the wealthy, the company sought to impress car manufacturers and car buyers alike. The engine itself was a market trendsetter in the respect that it was the first 8-cylinder engine and the first V engine to become available for mass market consumption. The Ford V8, and its success, came out of the American automotive industry’s desire for more power and less cost, and is widely considered by many to have gone a long way in cementing Ford at the forefront of automotive innovation. This advert for a Cadillac from the late 50s shows the prominence and, arguably, excessiveness of Chrysler’s influential ‘Forward Look’ style. The structure of most of Cadillac’s late 50s cars were dominated by the fin design. The Cadillac Eldorado, and its fins marked the peak of the popular styling trend, and were by far the largest ever attached to a production car. They were too extravagant for some customers however, and within a couple of years cars were being redesigned to minimise or even eliminate the fin design entirely. The style trend was responsible for some of Cadillac’s most recognisable cars. In recognition of this, 2010’s SRX, manufactured by the company, has the trademark vertical taillights sculpted into the tiniest of tailfins at the rear – a modern approach to the legacy of the mighty tailfin.