Angry Birds first appeared on the iTunes App Store in 2009 as a fun and humble puzzle game. Four years later, Mikael Hed, CEO of the games’ developer Rovio, has transformed the brand into a global phenomenon 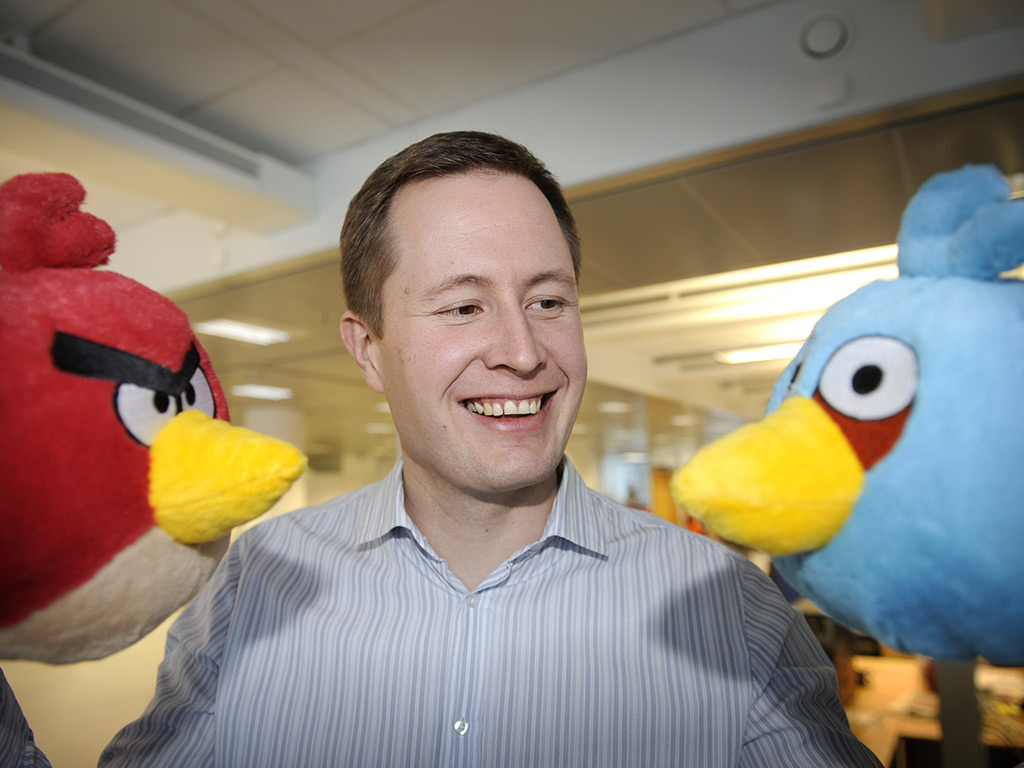 A giant yellow bird with red plumes on its head soars through blue skies. And crashes into a building. Another lays an egg in mid-air, which upon landing destroys a glass building, instantly killing the deformed green pigs that had been grunting inside. Though it sounds like the plot of a haunting nightmare, it is actually the premise of Angry Birds, the nonsensical flagship game developed by Rovio. Angry Birds is a sensation; it is the number one paid app of all time, and has evolved into a series of eight games – including a lucrative partnership with George Lucas in Angry Birds Star Wars, in which the grunting piggies are dressed as Stormtroopers and the flying birds come armed with lightsabres. It might sound absurd, but with 1.7 billion downloads to date, Mikael Hed, CEO of Rovio, is laughing all the way to the bank.

Though the game is simple, it is very compelling; a casual puzzle of sorts, players work out the angle and force with which the ‘angry bird’ must be catapulted towards varying buildings and structures in order to cause the greatest amount of damage and ‘pop’ the most pigs. As players progress through levels, the puzzles become increasingly complicated and it’s possible to lose oneself in the game for a good few hours at a time. But it would be foolish to discard Rovio and its Angry Birds phenomenon as just another gaming and app company. In 2012, it generated sales of $106.3m: a remarkable feat considering its flagship product costs 99 cents on iTunes. It has fans ranging from Justin Bieber to Salman Rushdie, and people often refer to it as ‘addictive’.

All in the family
At 36, Hed has spent the majority of his professional career building up Rovio with his cousin. Though the company is very creative, Hed’s position as CEO means he often acts as the reins on the creative minds in the office – such as Niklas ans Peter Veserbacka, the chief marketing officer (also known as “the Mighty Eagle”). Hed is certainly the business mind of the organisation and responsible for much of its growth. After military service in Finland, Hed attended business school in the south of France and went on to study at Tulane University in the US. After Niklas and a group of friends won a game-programming competition organised by Vertecka, he founded Relude – which would later become Rovio – in 2004. When Niklas asked Mikael to be CEO, his cousin was immediately drawn to the company. “I couldn’t see how that company could make money,” he told Wired. “But I felt this is what I wanted to do.”

Despite its simplicity, Angry Birds is the product of years of hard work. The company has been at the vanguard of gaming since it was formed in 2003, but it has not always had an easy ride. Its first game, King of the Cabbage World, was the world’s first real-time multiplayer mobile game and yet few people have heard of it. In fact, Rovio launched 51 games with varying degrees of success before Angry Birds became a blockbuster. Some were sold for millions to bigger developers like EA and Namco, but the company was struggling by 2006. That was when Kaj Hed – Mikael’s father and a successful Finnish financier – stepped in with €1m and became the company’s majority shareholder. Rovio was safe for the time being, but complicated family dynamics within the company meant Hed was ready for a different challenge.

In 2007, Hed left Rovio and went into publishing, creating a detective comic book series. But he kept an eye on Rovio, which had still not recovered despite Kaj’s investment. Its old model revolved around creating hit games and selling them on, and it was struggling. In 2009, Rovio had shrunk to 12 employees and Hed agreed to come back at the request of his cousin, provided his father took a backseat role. In the meantime, Apple had launched the iPhone, and other companies were scrambling to catch up and break into the smartphone market.

A global brand
The real eureka moment did not come until late 2009, when Hed and Niklas sensed the change in the market and decided to create a game for the mobile age. Angry Birds was Rovio’s first game for mobile devices and was originally only available on the iPhone. Hed accurately predicted personal mobile devices were about to become the new dominant medium for mass communication, but it was still largely free of mass-media politics and economics. Angry Birds was a stroke of genius not because it was a good game that happened to succeed, but because it was a game designed and tailored for a new medium.

Wired called Rovio’s business strategy “Disney 2.0”, because Angry Birds was not only a simple and appealing game, it was the launchpad for an entertainment empire. “The iPhone was a hyper-competitive environment,” says Hed. “If we succeed there, we can go to other smartphones. And if we do well there, we can go to PC and console, and beyond. We planned this out well ahead of Angry Birds. So we decided we needed to conquer the App Store. We tried to profile the iPhone user and it turned out that it was everybody.” And so Angry Birds exploded onto the gaming scene.

Niklas is the man behind research and development, but Mikael has been the slingshot that propelled Angry Birds to superstardom. It was something of a masterstroke when Hed decided Rovio should focus exclusively on building and developing the Angry Birds brand, and expand it beyond gaming. Today, 30 percent of Rovio’s revenue comes from merchandising products like cuddly Angry Bird toys, and the company has just launched Angry Birds Toons: the games’ own animated series, documenting in detail the Bird’s battle against the Bad Piggies on Piggy Island. The three-minute animations are launched weekly and can be viewed on any Angry Birds platform for free. It’s all part of Hed’s strategy to make Angry Birds more than a game: a well-rounded mobile entertainment enterprise.