From humble beginnings to leading one of the largest multinational empires, Howard Schultz has always been eager to show off his entrepreneurial spirit, even if that has meant courting controversy along the way 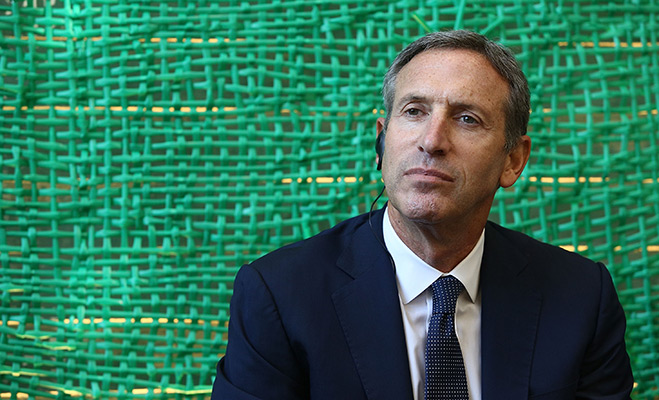 Born on a public housing estate in Brooklyn, New York, Howard Schultz has climbed from a relatively modest start to build the world’s most recognisable coffee company, accumulating a reported personal wealth of $1.5bn. Along the way he’s set up his own investment group, had an ill-fated period owning an NBA basketball team, and frequently waxed lyrical about what it takes to be a successful leader of a multinational business.

Starting out
Coming from a German-Jewish family based in a rough part of New York, Schultz was born in 1953. It was his experience being raised in a tough part of Brooklyn that gave him his will to succeed, as he told Barrons magazine recently: “A big piece of my competitive spirit is linked to growing up in Brooklyn, in the projects, living on the other side of the tracks and wanting more out of life.”

He was the first member of his family to go to university after gaining an athletics scholarship to Northern Michigan University in 1972, where he graduated with a degree in Communications three years later. After university, he spent time as a salesman for Xerox before joining a Swedish coffee machine manufacturer called Hammarplast as the general manager.

It was there, in 1981, that he first came into contact with a small, Seattle-based coffee shop called Starbucks Coffee Company. A year later he was made director of marketing at the firm, where he began to explore how different countries – specifically Italy – treated coffee shops more as a social meeting place, while offering high-quality coffee.

After failing to persuade the owners of the business to adopt some of his suggestions, such as using espresso coffee, Schultz left in 1985 to start his own cafe called Il Giornale, based around the concept of a relaxed place where people could drink coffee and read the newspaper, as he had experienced in Italy. In 1987, after the owners of Starbucks wanted to focus their attention elsewhere, Schultz bought the company for $3.8m and merged it with his brand, setting about an aggressive expansion strategy that saw Starbucks cafes open across the US.

Starbucks is now the world’s leading coffee retailer, with a turnover of nearly $13.3bn last year, and operations in 61 countries around the world, propelling Schultz to become one of the most successful entrepreneurs in recent history.

Coffee shop philosophy
In his book Onward: How Starbucks fought for its life without losing its soul, published in 2011, Schultz talks about the philosophy behind his career and the entrepreneurial spirit that allowed him to build Starbucks up to the company it is today: “When we love something, emotion often drives our actions. This is the gift and the challenge entrepreneurs face every day.

“The companies we dream of and build from scratch are part of us and intensely personal. They are our families. Our lives. But the entrepreneurial journey is not for everyone. Yes, the highs are high and the rewards can be thrilling. But the lows can break your heart. Entrepreneurs must love what they do to such a degree that doing it is worth sacrifice and, at times, pain. But doing anything else, we think, would be unimaginable.”

Schultz’s strategy when managing Starbucks’ remarkable growth during the 1990s was to involve employees as much as possible in the decision-making process. Delegating responsibility was clearly a hard thing to do for someone so involved in the business, but he identified it as a necessity. In his first book, Pour your heart into it: How Starbucks built a company one cup at a time, Schultz said: “Early on I realised that I had to hire people smarter and more qualified than I was in a number of different fields, and I had to let go of a lot of decision-making. I can’t tell you how hard that is. But if you’ve imprinted your values on the people around you, you can dare to trust them to make the right moves.”

Double dribble
Ultimately, Schultz felt at the beginning of this century that he would delegate the running of Starbucks to a new CEO, and handed over control. It was around this time that he set about taking over a passion project, the NBA basketball team the Seattle Supersonic.

However, his five-year tenure as team owner was filled with acrimony. He managed to get on the wrong side of star player Gary Payton, before suffering years of accusations that he was merely running the team as a business rather than as a fan. In an article published after he sold the team in 2006, former employee Jeremy Rapanich accused him of ‘nickel-and-diming’, much to the chagrin of fans and players who believe sports teams should be lavished with money to gain success. Schultz sold the team for $350m to a consortium who moved it to Oklahoma, before it ceased to operate in 2008.

After his unsuccessful stint in charge of the Seattle Supersonics, Schultz decided he would be better placed in charge of the company at which he had experienced his most success. Although he had remained as chairman of Starbucks, he felt the coffee company had lost its way in his absence.

Some commentators have drawn comparisons between Schultz’s inabilities to understand the role of the owner of a sports team with his unfortunate handling of accusations of tax dodging in the UK, in which he was accused of not appreciating the severity with which UK consumers would consider the situation.

Looking back on his career and to the future, Schultz says his ambitions are greater than before. He told Barrons: “I never allowed myself to imagine I’d be in this position. Now that I’m here, my dreams are bigger.”