Flavio Briatore: A victim of his own success

Success can do strange things to people. Whilst most continue to reap the rewards, others throw it all away. Unfortunately for Briatore, he is one of the latter 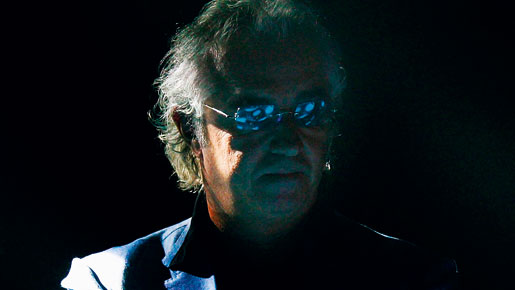 ‘Boring’ isn’t an adjective one would use to describe Flavio Briatore. Indeed, for someone associated with bling and supermodels including Naomi Campbell, Heidi Klum and Adriana Volpe, such a tag would be deemed by the man a gross insult.

Best known for his involvement with the Benetton global clothing brand and Formula 1 motor racing in recent years, Briatore, who was born in 1950 in Verzuolo near Cuneo (in the Italian Maritime Alps), undertook a variety of jobs in the early years, including ski instructor and insurance salesman.

He later moved to Cuneo, becoming an assistant to businessman Attilio Dutto, owner of the Paramatti Vernici paint company. Paramatti had a chequered history, its previous owner having been Michele Sindona, the Sicily-born banker who laundered heroin proceeds for the Gambino family and was poisoned in prison. Dutto himself meanwhile was killed in 1979 in a car bomb attack by persons unknown. When Paramatti subsequently collapsed Briatore was charged and later convicted of fraudulent bankruptcy and given a four and a half year prison sentence.

Just when you think you’re out…
Decamping to the US Virgin Islands, apparently to avoid jail, Briatore later moved back to Italy, settling in Milan, after being granted amnesty. It was in Milan that he developed what would prove to be a fruitful relationship with Luciano Benetton, founder of the global clothing firm. Benetton was undergoing significant expansion in the US and Briatore was offered a job arranging franchises there – a lucrative endeavour as he took a cut from each franchise agreement.

During the 1980s Benetton opened more than 800 stores in the US – a far cry from the family’s first store opening in Belluno, northern Italy, in 1966.  Paris came three years later, with Luciano as chairman, his brother Gilberto in charge of administration, their younger brother Carlo running production, and Giuliana as chief designer. Luciano continues to oversee the company’s operations whose core business remains clothing lines – casual clothing, for example, still being marketed under the famous United Colors of Benetton banner.

During the 1980s Benetton entered F1 racing, firstly as a sponsor in 1983 for the Tyrrell team, then Alfa Romeo and finally Toleman. In 1985 it acquired the underperforming Toleman team and renamed it Benetton Formula Ltd (Benetton). Briatore was drafted in by Luciano Benetton as Commercial Director, before being promoted to Managing Director and turning Benetton into a competitive F1 team. He ran Benetton from 1990 to 1997. In 1998 he was fired by Rocco Benetton – the youngest son of Luciano – who had just been brought in as the team’s aerodynamics engineer. Benetton was sold to Renault in March 2000 for $120m. Renault then brought back Briatore as team manager.

The sex factor
Briatore’s usefulness to the Benetton team could be seen in the potential F1 offered in terms of promoting the company’s brand – something Briatore was far more familiar with than F1 racing. But it didn’t end there, with Briatore also spotting the press coverage potential of bringing in a few leggy models for ‘eye candy’ purposes.

Factor in the sale of sponsorships to the likes of tobacco companies, and the team’s ongoing running costs were largely covered. When Briatore was reportedly persuaded in a late-night meeting with F1 supremo Bernie Ecclestone to sign up-and-coming driver Michael Schumacher, the Benetton success story was assured.

Never one to resist the charms of rich and beautiful young women, Briatore found himself in the gossip columns in 2004 as his increasingly fraught relationship with German supermodel Heidi Klum became the subject of numerous column inches.

Having announced she was pregnant in December 2003, Klum and Briatore later split after he was reportedly having an affair with 19-year old model Vanessa Hilger.
Klum and Briatore had a very public spat about where the child should be born – Klum preferring the US; Briatore wanting Germany on the assumption that maintenance costs would be lower there. In the event the child was born in New York – Klum later confirmed that British R&B musician, Seal, with whom she had started a relationship, was acting as the baby’s father on a day-to-day to basis with no input from Briatore, the biological father.

Stuck in a pit-stop
In the professional sphere, Briatore was banned indefinitely in September 2009 from participating in any FIA (Fédération Internationale de l’Automobile) sanctioned series and forbidden from managing any FIA-licensed driver for the foreseeable future.

Having been forced out as team manager of Renault – ostensibly because Renault had refused to back him, following its own internal enquiry – Briatore (and Renault chief engineer Pat Symonds) stood accused by Renault driver Nelson Piquet Jr. of asking him to deliberately crash his car at the 2008 Singapore Grand Prix – allegations Briatore and Symonds denied. Piquet’s actions had necessitated the intervention of the safety car, which in turn helped team-mate Fernando Alonso to win the race.

In January 2010 Briatore’s indefinite ban was overturned by a French court. In its decision the court said: “The World Council, by forbidding FIA members and licences to work with Messrs Briatore and Symonds, on the one hand added a negative condition – to not work with them – which is not provided for within the FIA statutes.” Briatore was awarded €15,000 compensation – far short of the €1m (then $1.44m) he had been seeking. The court gave the FIA 15 days to pay or face a €10,000-per-day fine. Pat Symonds, meanwhile, had his five-year ban overturned and was awarded $7,200 compensation; just one percent of what he had been asking for.

Strong-arm tactics
Briatore, never one to be without a number of business interests, could at least devote more energy to West London-based football club, Queens Park Rangers. Acting as partner to Bernie Ecclestone, the two men had purchased the club in September 2007 for a reported £14m. As history would show, QPR ticked the necessary boxes when it came to buying an underperforming asset that could be beefed up and sold on at a profit.

Ecclestone and Briatore were joined as co-owners in December 2007 by multi-billionaire steel magnate Lakshmi Mittal, who took a 33 percent stake. Amit Bhatia, Mittal’s son-in-law, was subsequently appointed to the QPR board to serve the interests of the Mittal family.

Asked when the then-Championship club could realistically expect to be playing with the big boys in the Premier League, Briatore set a four year target (which he met). He noted that the five-year target for Benetton to win the F1 Championship had been achieved in three. As a club QPR had plenty of issues, including falling gates, an estimated £13m of debt and boardroom shenanigans, typified by a bizarre incident in 2005 when the then-majority shareholder Gianni Paladini, was reportedly kicked, beaten and threatened with a gun unless he agreed to resign from the board. Two men eventually sent for trial over the incident were subsequently acquitted.

If QPR as a club was rapidly taking on the trappings of a soap opera, such a reputation didn’t diminish during the stewardships of Ecclestone and Briatore. October 2008, for example, saw the sacking of manager Ian Dowie after just 15 games in charge – the club only one point off a play-off position and in the last 16 of the Carling Cup when Briatore wielded the axe. Anecdotal evidence suggests that before one particular game Dowie was presented with a team sheet by Briatore and told that would be his starting eleven for that afternoon.

No friend to the fans
In 2009 as the dark clouds had descended on Briatore’s F1 activities; the Football League confirmed it was looking into the circumstances surrounding his ban from F1 and whether it would impact his ability, as a co-owner of the club, to meet the league’s ‘fit and proper person’ test. In the event, Briatore dodged that particular bullet because it couldn’t be proven he had been banned by the FIA from involvement in the administration of F1 – hence there was no ‘fit and proper person’ test to meet under the league’s rules.

By May 2011 the relationship between Vice Chairman Amit Bhatia and Ecclestone/Briatore had broken down to the point of Bhatia resigning from the board, principally due to an earlier decision to fire club CEO and Chairman Ishan Saksena, as well as imposing a 40 percent increase in ticket prices for fans. The Mittal family, which retained its 33 percent stake, had been in discussions to buy out Ecclestone and Briatore, but couldn’t reach agreement after making a verbal offer described by Ecclestone and Briatore as ‘insultingly low’.

What had become clear though was that Ecclestone and Briatore were looking for a way out – an objective met when Malaysian tycoon Tony Fernandes, owner of Team Lotus in F1 and low-cost airline AirAsia, agreed to buy them out in August 2011 for a reported £35m – a far cry from the £100m valuation Ecclestone had placed on the club some months earlier. It also marked the return of Amit Bhatia in his role as Vice Chairman.

Victim of his vices
While Ecclestone and Briatore were looking to sell out, Briatore had yet another brush with the law – this time with the Italian authorities, who reportedly seized €1.5m from bank accounts in Italy and Monaco, claiming they were the proceeds of tax fraud. This followed the boarding and seizure of Briatore’s £17m luxury boat ‘Force Blue’ by the authorities back in 2010.

The super-yacht is supposed to be available for charter at a cost of €245,000 a week in the summer high season, and is registered in the Cayman Islands in order to avoid Italian tax. The authorities argued however that Briatore and his family were the sole users of the boat and falsely using the registration as a tax break.

For Briatore, life has never been dull. It is likely to remain that way – more so if he can devote even more energy to Wonderbra model Elisabetta Gregoraci, whom he married in June 2008. They were driven to their reception by none other than Fernando Alonso.