Already affecting millions of people around the world, Alzheimer’s disease is only set to become more prevalent as the global population ages. AC Immune CEO Andrea Pfeifer believes her company can tackle this unmet medical need 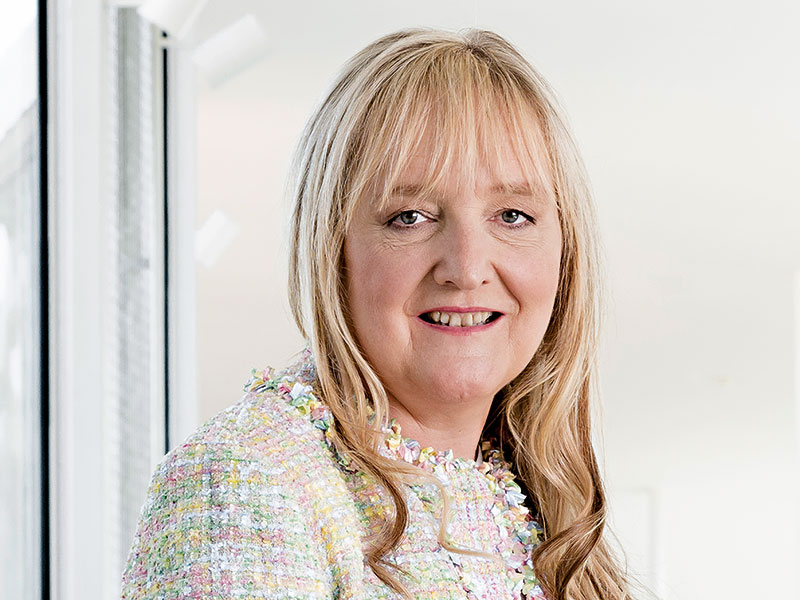 Despite the breakthroughs that Andrea Pfeifer has made during her time at the helm of AC Immune, she is well aware that the pharmaceuticals business is rarely straightforward
Featured

In the coming decades, the number of people with dementia is predicted to almost double every 20 years. According to Alzheimer’s Disease International, this means 75 million people will be living with the condition in 2030. By 2050, this number will be closer to 131.5 million. The medical progress that has seen life expectancy steadily rise across the globe has been accompanied by a cruel twist: although not exclusively, dementia usually affects those aged over 65.

The most common cause of dementia is Alzheimer’s disease, a condition that leads to the breakdown of the connections between cells in the brain due to the formation of abnormal protein structures known as ‘plaques’ and ‘tangles’. It can be a hugely debilitating disease, affecting an individual’s memory, personality, behaviour and day-to-day life. According to UK charity Alzheimer’s Society, individuals with Alzheimer’s live between just eight and 10 years on average after being diagnosed with the condition.

Although the symptoms of Alzheimer’s were first identified in 1906, much about the disease remains poorly understood. Thus far, this ignorance has thwarted efforts to find an outright cure, but many pharmaceutical firms remain undeterred. One such company, AC Immune, is making great strides in its efforts to improve the lives of patients suffering from Alzheimer’s and other cognitive diseases, boasting several therapeutic and diagnostic treatments as part of its drug pipeline.

If AC Immune can make an impact in the fight against neurological conditions, it will owe a large portion of its success to the ambition and hard work of its CEO and co-founder, Andrea Pfeifer. After graduating with a PhD in toxicology from the University of Würzburg, Pfeifer soon found herself working at Nestlé, where she eventually headed up the global research team. After 16 years at the company – a period Pfeifer describes as one of “internal entrepreneurship” – she was ready to move on and put her knowledge and experience towards making a positive difference to the lives of millions of people.

Risk and reward
Pfeifer has always been interested in healthcare, particularly neurological health. In fact, while at Nestlé, she worked on research into the impact coffee has on the brain. So when the scientific founders of AC Immune came along and showed her the technology the company had been working on, her interest was piqued instantly.

Still, making the move from the upper echelons of a multinational corporation like Nestlé to an unproven start-up was no easy decision. “I took a moment to reflect on the future,” Pfeifer told European CEO. “I had already achieved quite a bit and decided it was time to do something else. And I thought back to my time in the US when I really wanted to find a cure for cancer. I had a significantly positive experience in cancer research where I learned that precision medicine can be the beginning of a whole new treatment paradigm.”

While many believed Pfeifer’s decision to leave Nestlé was a bold move – her mother thought she must be having a midlife crisis – the passion shown by AC Immune’s founders gave her the courage and conviction to take her career in a new direction. Certainly, nobody could doubt that the decision to move into researching neurodegenerative conditions was a worthwhile one. AC Immune has been looking at ways to improve the lives of patients living with Alzheimer’s and other neurological diseases since 2003. Despite these conditions becoming increasingly prevalent, they still represent a huge unmet medical need. “Around the world, there is a new case of dementia every three seconds,” Pfeifer explained. “Today, this adds up to around 50 million people worldwide. While it is good news that we are all living longer, healthier lives, it means that globally, the number of people with dementia is predicted to more than triple by 2050. The worldwide cost of the condition is set to double from around $1trn [€907.9bn] to $2trn [€1.82trn] by 2030. Yet, more than 100 years after the discovery of Alzheimer’s disease, we do not have an effective treatment or cure. So it represents a huge challenge and a huge opportunity to address the largest unmet need in healthcare.”

Pfeifer’s motivation is clear for all to see. As someone who has a parent living with a chronic medical condition, she has an added personal interest that drives her forward in pursuit of something that will make a difference to millions of people around the world. She has already dedicated a significant portion of her life to finding a treatment for Alzheimer’s disease, and believes that she can achieve her aim at AC Immune.

A platform to build upon
Alzheimer’s disease is typically diagnosed once symptoms are clinically present, meaning it is often identified when an irreversible loss of neurons has already occurred. This helps to explain the research challenges faced by AC Immune and other pharmaceutical firms.

Recently, efforts to find a cure have focused on build-ups of amyloid-beta (Abeta) protein plaques and tau protein tangles in the brains of those suffering from Alzheimer’s. Why these build-ups occur remains something of a mystery; as a result, approved treatments currently only focus on relieving symptoms rather than tackling the underlying causes of the disease. “An earlier diagnosis using novel imaging methods and biomarkers is crucial and is expected to translate into earlier treatment with better outcomes for the patients,” Pfeifer explained. “Effective early treatments may also open the door to the possibility of disease prevention. In response, AC Immune has developed a five-point roadmap to successful therapies for neurodegenerative disease.”

As well as providing earlier and more accurate diagnostics, AC Immune hopes its two technology platforms will facilitate the development of new medicines that specifically target the misfolded proteins believed to cause Alzheimer’s. “Our biological SupraAntigen and chemical Morphomer platforms are our scientific basis to generate a robust pipeline of antibodies, vaccines and small molecules [that] selectively bind to misfolded proteins, [which are] the underlying cause of a broad range of neurodegenerative diseases,” Pfeifer said. “These proprietary technology platforms are product-focused and highly productive engines for the sustained growth of our company.”

The platforms also address two key issues found in the development of therapeutics and diagnostics for neurodegenerative diseases. First, they support the body’s production of antibodies against misfolded proteins, which, although pathogenic, are still recognised as ‘self-proteins’ and do not set off an immune response. And second, the platforms differentiate between normal and pathological proteins, making drug specificity easier to achieve.

So far, AC Immune’s proprietary technology is making impressive progress. The anti-Abeta antibody crenezumab – which is currently being used in two phase III clinical trials and could slow or prevent the decline of cognitive and functional abilities in Alzheimer’s patients – was derived from the passive immunisation approach of the SupraAntigen platform. Meanwhile, three therapeutic and two diagnostic development candidates were produced by the Morphomer platform.

Slow progress
Despite the breakthroughs that Pfeifer has made during her time at the helm of AC Immune, she is well aware that the pharmaceuticals business is rarely straightforward. Companies can spend millions of euros researching a particular treatment, only for it to fail to meet safety protocols or simply prove ineffective. Even so, Pfeifer doesn’t view the time or money spent on unsuccessful drug development as being wasted.

“To use Alzheimer’s disease as an example, while finding a treatment or cure for the condition is proving difficult, that is most definitely not a reason to stop searching for it,” Pfeifer told European CEO. “The research we undertake in this field – no matter which institution – is all building up our knowledge of a disease that is one of the biggest threats to public health and one of the biggest opportunities in healthcare. Setbacks in drug development are part and parcel of this challenge and with every failure, we learn more about the disease and what we can do to fight it successfully. We are finding out more about the disease all the time, and we will get there in the end.”

Importantly, Pfeifer’s optimism has never been replaced by blind faith. While many other pharmaceutical firms have struggled in recent years due to drug trial setbacks or failures to abide by regulatory standards, Pfeifer has been careful to steer her company away from such a fate. All of AC Immune’s clinical trials meet the standards set forth by regulatory bodies such as the European Medicines Agency and the US Food and Drug Administration, and patients are always informed of all potential risks before they are allowed to volunteer for trials. Even though the cure for Alzheimer’s can’t come soon enough, protocols must always be followed.

Mind over matter
Looking to the future, the task facing Pfeifer and AC Immune is huge – namely, finding a cure to a debilitating disease that is set to affect countless more individuals across the globe in the coming years. But while the challenge may be formidable, so too is Pfeifer’s resolve.

Pfeifer has already dedicated a significant portion of her life to finding a treatment for Alzheimer’s disease, and believes that she can achieve her aim at AC Immune

“Combined with the complementary diagnostics in clinical development and our cash position, AC Immune is in a strong position to continue the search for a treatment or even a cure for Alzheimer’s disease – and that means we have the potential to change millions of lives for the better,” Pfeifer explained. “This is really what I want and believe we can do, and it’s so important both for the people who suffer from this disease and their families, for all our great people at AC Immune and other companies who are working so hard on finding a solution, and for me personally.”

AC Immune’s landmark study, the Alzheimer’s Prevention Initiative – a trial of its investigational candidate, crenezumab – looks set to be critical. The ongoing trial examines cognitively healthy individuals in Colombia who possess an autosomal dominant mutation and therefore are at a high risk of developing familial Alzheimer’s disease. The data from this trial is expected in Q1 2022 and could help shed further light on ways to tackle the disease.

In addition, AC Immune will continue working with some of the finest minds in the industry – in December 2018, the company signed a collaboration agreement with US pharmaceutical firm Eli Lilly and Company – and pursuing promising new treatments. Support from external donors, including a recent grant from the Michael J Fox Foundation, also helps support the company’s efforts to tackle the neurological condition.

When fighting a disease like Alzheimer’s, it is impossible to put a time frame on when effective treatments will be found. In the 16 years since Pfeifer was appointed as CEO of AC Immune, the condition has continued to cause immense suffering – either directly or indirectly – for millions of people around the world. But where there’s a will, there’s a way, and as long as Pfeifer and her team continue to push for new treatments and an eventual cure, there’s hope for those suffering at the hands of Alzheimer’s.