Like all commodities, the price of aluminium is subject to conditions that are beyond a single company’s control. That’s why Norsk Hydro CEO Hilde Merete Aasheim is keen to implement a long-term financial strategy 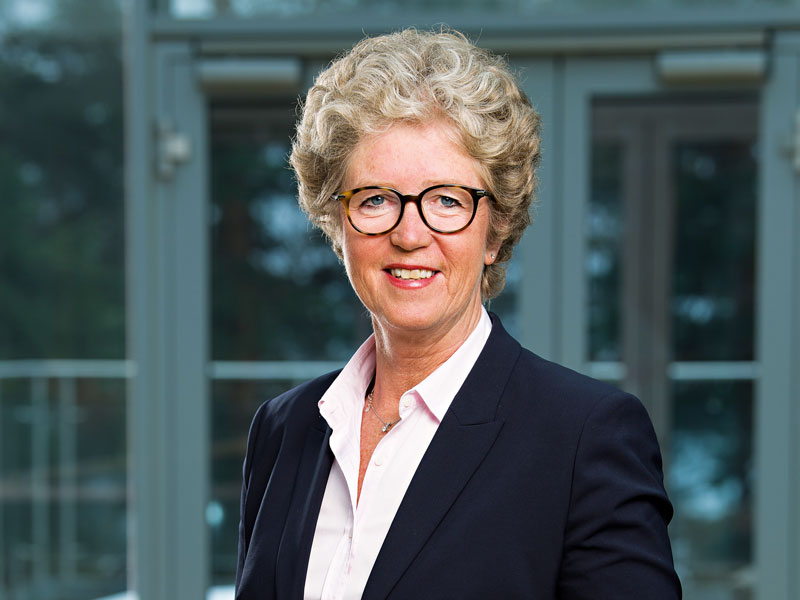 Having previously served as chair of the International Aluminium Institute, Aasheim knows the difficult balancing act the industry must grapple with
Profiles

The prominence given to environmental issues of late has placed a harsh spotlight on the commodities sector. The planet’s raw materials are finite, and harvesting them can often be cheaper than recycling. The environmental cost is usually ignored.

Nevertheless, the aluminium industry has not performed too badly in terms of sustainability. A staggering 75 percent of all the aluminium ever produced is still in use today. Still, demand for the metal is growing at such a rapid rate that mining projects continue to be an important source of the commodity. According to market research firm IndustryARC, the global demand for aluminium is set to expand by a compound annual growth rate of 4.2 percent between 2019 and 2025.

Given that global demand cannot be satisfied by recycled aluminium alone, a great deal of environmental responsibility still resides with mining firms producing this valuable commodity. One of the world’s largest, Norsk Hydro, employs 35,000 people across 40 countries and is present across all continents.

The company’s CEO, Hilde Merete Aasheim, understands the direction the industry is travelling in and wants Hydro to lead the way. At the same time, the task facing her has been made more difficult by unfavourable market conditions. Global trade tensions have depressed demand for new commodities, putting pressure on producers to favour short-term financial goals over long-term environmental ones. But with Aasheim at the helm, this is unlikely to be the case at Hydro.

Dented demand
Although Aasheim only took over as CEO of Hydro in May last year, she has plenty of experience to draw from. Before accepting the role, she worked as the head of Hydro’s primary metal business, and has been a member of the firm’s corporate management board since 2009.

However, even Aasheim’s many years of experience may not have quite prepared her for recent geopolitical events and the impact that they would have on the aluminium trade. “Aluminium was the worst-performing base metal in 2019, being down six percent year-to-date,” Dmitry Glushakov, Head of Metals and Mining Research at VTB Capital, told European CEO in December. “This was driven by structural cost reduction – Chinese alumina and thermal coal prices were down 30 to 35 percent year-to-date and drove down aluminium costs. The lower aluminium price has already affected high-cost Chinese output (down three percent year-on-year), while some 15 percent of ex-China output is loss-making at the current aluminium price.”

Last year’s price woes were partly a result of the ongoing trade tensions between China and the US, which continue to impact global demand. Whenever there was the suggestion of a deal being struck between the two nations, the value of base metals made a tentative recovery.

However, aluminium’s struggles are not entirely the fault of antagonism between Washington and Beijing: the automotive sector, which is responsible for somewhere between 30 and 40 percent of aluminium’s global demand, is also experiencing a downturn. These are the difficult market conditions that Aasheim has had to contend with. Even though demand is expected to pick up slightly in 2020, so is supply, meaning the era of low prices looks set to continue. This raises difficult questions for aluminium producers like Hydro. Fortunately for the Norwegian firm, Aasheim already appears to have answers.

Off the scrap heap
Having previously served as chair of the International Aluminium Institute (IAI), Aasheim knows the difficult balancing act the industry must grapple with. Two of the key objectives of the IAI are to increase the market for aluminium while, at the same time, encouraging the healthy, safe and environmentally sound production of the material. These twin goals are not easy to reconcile.

One way to do so is to focus on recycled aluminium as a source of revenue – an area that Aasheim is already targeting. In December 2017, Hydro’s primary metal business – at the time, under Aasheim’s leadership – launched a new extrusion ingot called Hydro CIRCAL 75R, made of a minimum of 75 percent post-consumer recycled aluminium. Extrusion ingots are widely used to create other materials in the construction, transportation, engineering and consumer goods industries. The demand for Hydro 75R has been driven by an increased appreciation of sustainability issues, both in the commodity sector and in society generally.

“Customers are increasingly seeking advanced solutions with the lowest possible impact, from building and construction to automotive, packaging and electronics,” Aasheim announced in a statement last year. “This enables us to commercialise our best-in-class footprint and leading positions within process technology and product innovation.”

But while aluminium does have an enviable record when it comes to recycling, the production of primary aluminium remains relatively energy-intensive. At Hydro, however, Aasheim is keen to continue the company’s long history of using renewable power sources, maintaining its place among the industry’s greenest firms.

“Electricity accounts for 30 percent of aluminium production costs, and one way to address the environmental part of the [environmental, social and governance] equation is to improve the energy source – away from coal-fired generation [and] towards renewables,” Glushakov explained. “For example, [aluminium company] RUSAL’s main aluminium production assets are located in Siberia, so it effectively sources aluminium from renewables – large hydropower plants located at major Siberian rivers. It is quite different from the Chinese aluminium industry, where the majority of power comes from coal-fired generation. So there is a marketing initiative from producers to differentiate aluminium produced based on renewable energy from others.” Hydro could never be accused of jumping on the sustainability bandwagon when its name stems from the fact that it was an early pioneer of hydroelectricity. The Norwegian company first built a hydroelectric power plant back in 1906 to help with the production of potassium nitrate. Then, in 1963, its first aluminium production plant using hydropower was constructed in the Norwegian coastal municipality of Karmøy. Today, the company has more than 20 hydropower plants in use for aluminium production.

Although the aluminium industry has experienced some struggles in recent times, there are reasons for optimism. As various industries take a more considered approach to their carbon emissions, the market for low-carbon aluminium has grown. Earlier this year, Hydro’s head of extruded solutions, Egil Hogna, told Reuters that he expects the company to sell 25,000 tonnes of its CIRCAL-branded post-consumer recycled aluminium in 2020 and between 40,000 and 50,000 tonnes the following year. If it achieves this target, such growth speaks of the commitment towards sustainability that Aasheim made in her maiden statement after becoming CEO.

Carrying the can
While Aasheim has continued to uphold her company’s green values, her life has been made more difficult by disruption elsewhere in the business. In December 2019, a transmission tower in Brazil fell, causing a power outage at the company’s bauxite mine. As a result, the supply line that normally feeds Hydro’s nearby Alunorte refinery was cut for 10 days. Although Hydro claimed that back-up power sources ensured the economic damage was minimal, it represented another setback in a region that has a history of similar issues.

Between March 2018 and September 2019, the Alunorte refinery suffered a 19-month hiatus, estimated to have cost Hydro $270m (€243m). The closure was related to reports that pollution from the plant was causing water supply contamination. The return to full production provided an early fillip to Aasheim’s time in charge and demonstrated that she is serious about improving operations at Hydro. Aasheim has certainly not been given an easy introduction to life at the top of one of the world’s biggest aluminium producers. In fact, the day after her announcement as Hydro’s new CEO, her leadership credentials underwent a huge test following a major cyberattack. A ransomware virus of unknown origin forced Hydro to switch some smelters to manual operation and halt production at several plants. It took more than a month before Hydro was running at full capacity again.

“We gained unique experience in the situation that the network was completely down, which you never will experience under normal operations,” Aasheim told Fastmarkets AMM. “We had to rebuild from scratch, an opportunity we used to redesign and strengthen our systems. We are sharing our experience, as industry players will become victims of future cyberattacks, whether it is us or someone else.”

Aasheim’s response to the cyberattack that occurred so early in her tenure as CEO is indicative of her leadership style. She is constantly looking forward, using any setback as the starting point for future progress. She has stated that her priority is ensuring the company gets the basics right – that way, it can improve reliability and restore the confidence of any shareholders concerned by recent events.

Pedal to the metal
Even under such solid leadership, however, some difficulties will be impossible for Hydro to tackle on its own. The performance of all commodity producers is, to a large extent, dependent on prevailing market conditions. If the sector is experiencing a price slump, there is only so much a CEO can achieve.

“The future of aluminium demand for this year depends largely on the recovery of global automotive output,” Glushakov said. “Last year, demand was disrupted not only by general consumer uncertainty over trade wars, but also due to stricter emission regulations in China and Europe, restricting sales of older-generation cars. In 2019, global demand might contract around one percent, while in 2020 some respite in emissions legislation in Europe and China and rising real estate completions in China might result in two percent growth in aluminium demand globally.”

If the automotive sector succumbs to further downside risks in 2020 – and many are predicting it will – then Hydro may need to change its strategy for the immediate future. Continuing its commitment to producing more low-carbon aluminium might be one way of shoring up finances in a tougher industry climate. In December, Hydro signed a new $1.6bn (€1.44bn) revolving credit facility with margins linked to the firm’s ability to meet its green targets. Specifically, the margin will be adjusted based on Hydro’s progress in reducing greenhouse gas emissions by 10 percent by the end of 2025. The new credit facility is part of a broader climate roadmap that also includes placing greater emphasis on research and development for low or zero-carbon technologies.

In the coming years, Aasheim will undoubtedly be a driving force behind Hydro’s sustainability initiatives. In 2019, she was named the 13th most powerful woman in international business by Fortune magazine, with particular praise reserved for her environmental ambitions. Despite the fact that Hydro is already the aluminium producer with the lowest carbon footprint globally, Aasheim knows there is more her company can do – even in less-than-ideal market conditions. When the going gets tough, the tough get going.