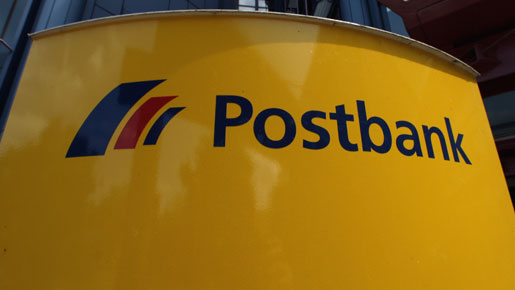 In mid-February, he announced that the retail institution – Germany’s biggest by number of outlets – would end the 2009-2010 year with another torrent of red ink, a pre-tax loss of €400m [US$540m]. But a week later, a much happier Jutte released new figures. Instead of the loss, Postbank would get into the black for the first time in two years with a net, post-tax profit of €76m. To be sure, it’s not a big profit but it’s enough to suggest the beleaguered institution is on the way back.

What had happened to achieve the €476m turnaround was a weekend’s re-calculation of charges against losses on securities. After an 18-month nightmare of collapsing values, auditors assessed that the improvement in capital markets had raised the value of securities and enabled Postbank to reduce its write-downs from the previous year’s €2.2bn to €920m.

“The bank will post a clear profit”, rejoiced Jütte after one of the few bits of good news he’s has had since he got the job in July. In fact, institutional investors weren’t too unhappy with the original loss. After all, €400m in the hole was a lot better than the previous year’s €1.1bn. At the time Deutsche Post, which is Postbank’s main shareholder, had to pump in €1bn to restore the balance sheet.

Poisoned chalice
Like many a new Chief Executive in Germany’s crisis-hit bank industry, Stefan Jütte was handed what looked like a poisoned chalice. Jütte (pronounced ‘yoota’) was appointed CEO of Deutsche Postbank late last year after a disastrous and untypical play in foreign commercial real estate. Also, many commentators accused, it generally lost its way in an ill-conceived raid on rival retail banks’ business.

Jütte was given the job of repairing the damage and of restoring the 100 year-old bank’s “tarnished reputation”. His predecessor Wolfgang Klein had walked away with giant package, at least by German standards, of €3.3m despite the bank’s abysmal performance.

In a familiar story, Postbank went wrong with a mad dash for growth. Take the loans on foreign commercial real estate. Last year it had to swallow a massive 33 percent write-down on the assets. Nearly all of Postbank’s at-risk commercial real-estate loan book is in the US and UK where the industry is under water.

Yet even that hit may not be enough. “Commercial real-estate will lead to significant [further] re-evaluations for German banks during 2010,” argues Michael Dawson-Kropf, analyst for Fitch ratings agency.

Blue book
An icon in Germany with its famous blue savings book and yellow signs, Postbank was the people’s institution with its low margins and costs, secure deposits and conservative lending habits. In effect, it was the banking equivalent of the Aldi discount grocery chain, but even older.

“Go carefree into the wide blue yonder,” proclaimed a 1950s ad for its savings book. And that, say financial historians, is exactly what a generation of Germans did when they travelled abroad for the first time, bearing a rucksack and their savings book.

All that changed when the institution got a full banking licence in 1995 and went for growth, often with dubious methods. “It developed from a worthy savings bank to an aggressive full-service retail institution”, explains Holger Handstein, finance expert at Nordrhein Westphalia’s consumer watchdog. As the bank became more aggressive, it lost its roots. It even launched a “happy hour” whereby bar certain times customers received discounted vouchers for certain financial products.

Happy 100th
This wasn’t the Postbank way and it began to show. In the most recent survey of retail banks by a leading consumer foundation, Postbank came third-last out of 21 rivals. Its performance was rated only as “adequate” and it came last in the all-important category of helping customers with investments. “The history of Postbank shows how an institution can destroy the trust of its customers,” concludes business commentator Caspar Dohmen.

However this promises to be a happier birthday for 100 year-old Postbank and its new Chief Executive. Jütte is a savings-bank man to his fingertips. He came up through the ranks in Germany’s banking industry with its preponderance of conservatively run state-owned institutions. Born in Johann Sebastian Bach’s city of Leipzig in the former East Germany in 1946, Jütte started out as a commercial trainee at a minor savings bank before moving into management.

Back to basics
He ended up at Postbank by accident, through the latter’s 1999 takeover of DSL Bank where Jütte was a member of the executive committee. Although he is a specialist in risk management and was on Postbank’s  executive committee, Jütte was quietly working out the final years of his career before the crisis hit, precipitating the departure of his predecessor and catapulting him into the top job last July.

Now 64, he has a clear view of where Postbank is heading and it’s “back to its roots,” he says firmly. “We want to be seen by our customers as simpler and more transparent. We’re going to reorganise our marketing channels and improve retail services.”

Jütte is also heading back to the basics with the savings-bank side of the business that has made the brand an icon for the average family. He’s streamlining the product range, dropping a quarter of its products. At the same time he’s winding back the bank’s leverage, down to below 30 percent from over 40 percent. And, in true old-style Postbank tradition, he’s making it easier for customers to access savings and investment products with a form of drive-in banking by linking up with Shell in an alliance that will add 1,100 extra branches by the middle of this year alone.

“It’s only the start of a string of strategic partnerships,” says Jütte. “We’re going to vigorously defend our number one position.”

However well he does at Postbank, Jütte cannot expect much in the way of remuneration. By the standards of the international banking industry, he’s working almost as a volunteer. As a result of the row over his predecessor’s remuneration package, he will be paid a modest €715,500 this year. Under pressure from the government, total remuneration for the top nine executives has been slashed by three quarters – from €16.2m to €4.2m.

Not quite Aldi-style rates, but heading in the right direction.