After 20 years leading some of the world’s top luxury brands, Claus-Dietrich Lahrs may be the best-dressed CEO in Europe. His latest tenure at Hugo Boss proves he may also be one of the smartest 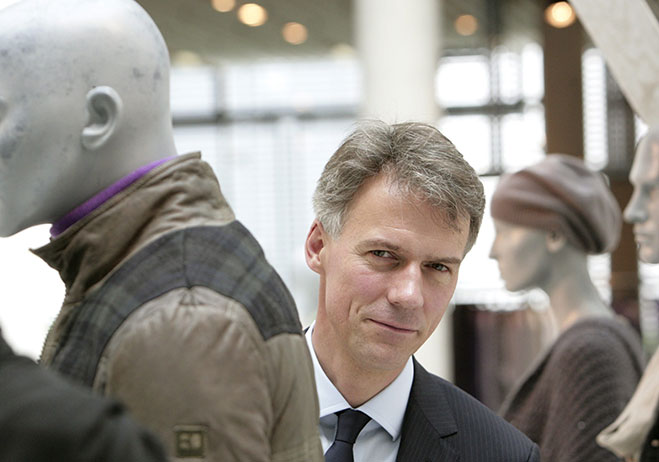 In times of deep recession, it is commonly understood that luxury brands are the first to feel the pinch; Michelin-star dining rooms abandoned, car showrooms empty and the world’s high-fashion boutiques see more tumbleweed than customers. When fashion management guru Claus-Dietrich Lahrs took the helm of ‘understated luxury’ brand Hugo Boss at the height of the 2008 financial crisis, he vowed the brand would not share in that fate. And he was quite right. Lahrs’ radical but well-calculated expansion strategy has seen the company explore a number of timely ventures that have increased the brand’s share prices over 800 percent in the last three years (if any perspective is required, Apple’s shares increased 500 percent in the same period). Looking back at his performances managing other luxury brands like Christian Dior Couture and Louis Vuitton, no one should be surprised by his turnaround success at Hugo Boss.

Passion for fashion
The 50-year-old CEO has more or less spent his entire career in the fashion industry. After earning a business degree at the University of Cologne in 1989, Lahrs launched his career at Delton AG für Beteiligungen – a German-based, strategic-management holding company. Working on several marketing and sales projects relating to the fashion world, Lahrs appeared to enjoy his taste of the industry. Two years later, he moved to pastures new, taking on the role of marketing retail manager for Cartier Germany’s Northern European operations. Lahrs oversaw sales and marketing there for five years before moving on to the main event: Louis Vuitton. The largest fashion conglomerate in the world, Louis Vuitton Moët Hennessy (LMVH) owns the biggest luxury brands available, ranging from Moët et Chandon to Dior. In 1997, Lahrs was hired as Louis Vuitton’s general manager for Germany; within three years he’d been promoted to the brand’s president and CEO in North America. In 2004, Lahrs was named the worldwide managing director of Christian Dior Couture – LMVH’s top brand. At Dior, Lahrs’ emphasis on ‘knowing his customers’ ensured a steady rise in revenues for the fashion giant, by reinforcing the strengths of the brand’s recurring operations. Revenues at Dior climbed steadily under Lahrs’ management – from 2006-2008 the brand increased its haul by over €140m. The same can’t be said for Dior now, since Lahrs was tempted away with an offer from the ailing Hugo Boss, Couture’s profits from recurring operations plummeted by 88 percent.

Into overdrive
Hugo Boss was in the midst of an internal power struggle when Lahrs arrived. He was brought in as the company’s CEO to replace Bruno Säelzer, who allegedly quit after clashing with the brand’s new financial backer, British investment firm Permira. Säelzer maintained the investors, who had bought an 80 percent share of the company the year before, had been unfairly pressing the board to pay higher dividends and make a bigger return on its investments. In the end, it was too much for Säelzer and the head of his supervisory board, who also resigned in 2008.

Yet the resignations and departures didn’t stop when Lahrs arrived, after he bluntly told the board that Hugo Boss simply was not “performing to its potential”. The criticism was less than welcome. “You inform a team that has been a while with the company… it doesn’t make you more popular at the beginning,” Lahrs has since said. More power struggles and house cleaning ensued before the brand’s demanding investors gave Lahrs and his aggressive new strategy – ominously dubbed ‘drive’ – their 100 percent support.

Lahrs’ first order of business was to get online sales up and running, before going on to oversee the launch of new women’s and children’s ranges. Meanwhile, Lahrs’ drive campaign sought to catch up with the output of more popular brands by doubling the number of collections his designers produced each year. He then drastically reduced overall development times and invested in automated production warehouses. All the above have accelerated production substantially. Sales have since increased to €2.3bn, and by 2015 Lahrs is hoping to increase this figure to €3bn. Given that share prices have risen by 800 percent, and a rapid expansion in Asian markets is bringing in more revenue than Primera previously thought imaginable, Lahrs’ seemingly optimistic projections are beginning to look extremely credible. Although the CEO has turned the company’s finances around to become one of the world’s fastest-growing brands, his approach isn’t without criticism. In fact, many long-time Boss lovers lament his new strategy has completely sullied the brand’s luxury status by injecting it with a mainstream retail capacity.

Mainstream luxury
Lahrs has defended his overstated retail approach by arguing that: “The business has become incredibly dynamic, which means that we have to be able to react quickly to trends.” Indeed, his strategy to bring Hugo Boss out of the clouds of unreachable luxury and into mainstream retail illustrates a growing trend among traditional high-end brands that are trying to improve sales by churning out more affordable products, offered directly to customers in a conventional retail environment. Lahrs has excelled particularly in the latter respect by opening up new chains across the globe as a means of increasing the face-to-face interaction customers are able to experience with his brand.

“The ability to see every day what consumers feel about the brand has helped us to become much more accomplished and much more to the point about developing and delivering collections,” Lahrs says. “Understanding them is the most important trend in the luxury industry.”

Purists may be disgusted by the brand’s ‘fall’ into the world of mainstream retail, but billions in sales suggest Lahrs knows what he is doing. His revival of Hugo Boss has turned out to be the fashion industry’s biggest success story of the twenty-first century – and although this year’s figures have been admittedly lower than anticipated, Lahrs remains confident that further expansion into China will take Hugo Boss to unimaginable heights.