Forget business, finance or MBA degrees. Airbus chief executive Thomas Enders opted for a programme of liberal arts papers at university, finishing with a PhD in political science. It may seem an unlikely qualification for the head of one of the world’s biggest aircraft manufacturers, but, for a company which must balance the interests of […] 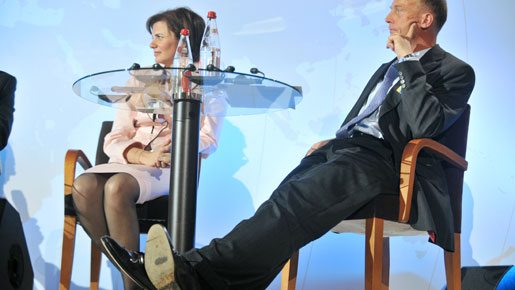 Forget business, finance or MBA degrees. Airbus chief executive Thomas Enders opted for a programme of liberal arts papers at university, finishing with a PhD in political science. It may seem an unlikely qualification for the head of one of the world’s biggest aircraft manufacturers, but, for a company which must balance the interests of several European nations, it also seems somewhat appropriate. Add to that the fact that the 50 year old is a reserve major in the German army and that he holds a helicopter pilot licence, the picture starts to come together.

Nevertheless, the first years of Enders’ career give no hint the German would go on to become one of the corporate world’s most powerful leaders. As a student at the University of Bonn and the University of California in Los Angeles, Enders studied economics, history and politics. He completed his doctorate at Bonn when he was 28.

By then, Enders had already gained plenty of work experience in the political world. In his early 20s, he got a first-hand glimpse into politics working as an assistant in the German Federal parliament. Three years later, he commenced a string of roles as a research assistant at German and British think tanks.

After an academic start to his professional career, it was Enders’ next role that would provide a neat segue from the world of politics into business. Enders joined the German Ministry of Defence’s planning section in Bonn, where he stayed for two years.

From there, the German took his first steps into the corporate realm in 1991, spending a few years in the marketing department at DaimlerChrysler Aerospace (DASA) before beginning his ascent through the company’s ranks. He was promoted first to corporate secretary, then to head of the chairman’s office, and finally to director of corporate technology and development. When Spanish and French aerospace companies joined forces with DASA in 2000 to form the European Aeronautic Defence and Space Company (EADS), Enders was made head of the new company’s defence and security systems division. In June 2005, he became the multinational’s co-chief executive, alongside Frenchman Noël Forgeard.

EADS develops civil and military aircraft, as well as aerospace technology such as satellite communications systems. Enders’ first year in the top spot went swimmingly. In April 2006, addressing shareholders in the 2005 annual report, the two chief executives basked in success. It had been an ‘outstanding year’ for aerospace generally, and a record year for EADS in particular, they said. Its main subsidiary Airbus was ahead of the competition, EADS was strengthening its relationships with the US, China and Korea, and the company had more than doubled the number of orders received.

But the happy results were not to continue – 2006 was significantly more difficult. Enders’ co-CEO was caught up in an insider trading scandal and, despite denying any wrong doing, resigned in July. In October, Airbus announced significant delays to the launch of its much-vaunted A380 super jumbo. EADS share price dropped 30 percent at the news.

Altogether, it was a ‘disappointing’ year for the company’s bottom line, Enders wrote with his new co-CEO Louis Gallois in the 2006 annual report.

The company’s structure, which involved top management positions being shared between a French and a German representative, came under scrutiny. Enders himself said he would ‘not pretend’ that the structure was ideal. “But given the constraints we’re operating under, it’s working quite well and it is evolving,” he remarked.

Months later, in mid-2007, EADS scrapped the unconventional management system, opting for a single chairman and a single chief executive. Enders took the reins at Airbus, leaving Gallois as the sole CEO of the parent company.

The aircraft manufacturer was embroiled in problems when Enders entered in mid-2007. Its flagship plane was well behind schedule, its cost-cutting plan was being undermined by exchange rate fluctuations, and its company management had just been significantly restructured.

The issues, which had started the previous year, were impacting the company’s image, Nadadja Popova, a travel and tourism analyst at Euromonitor, says.

Airbus delivered its first A380 – the company’s flagship aircraft, and the world’s biggest passenger plane – to Singapore Airlines in October 2007, a year late. With losses mounting from the A380’s delays, Airbus had already rolled out a restructuring plan, dubbed ‘Power8’. But a weakening US dollar against the euro made business increasingly difficult in the months after Enders took over the top spot.

Yet the news was not all bad. Airbus and its main competitor, Boeing, both had a cracker year at the Dubai air show in November 2007. Airbus then followed up a couple of weeks later with a record $17 billion contract to deliver aircraft to Chinese operators. The company ended the year having increased its delivery rate and with 1,300 more aircraft orders on the books than the previous year.

Since Enders came in, the company has pushed ahead with an international expansion programme, particularly targeting strong emerging markets, Popova says. Airbus now has an assembly line in China, its first outside Europe. In June, the company delivered its first Chinese-built aircraft.

In 2008, Enders saw Airbus deliver a record number of aircraft – 483 – and take on almost twice that amount in orders, as well as increasing its customer base.

There are plenty of challenges ahead which Enders must guide the company through. The biggest, says Popova, is the financial crisis, which is seeing new orders decreasing and many existing ones being deferred. Additionally, Airbus must respond to growing consumer and regulatory demands to reduce air travel’s impact on the environment, as well as shore-up its image in the wake of the high-profile Air France crash over the Atlantic in June, Popova says.

Things could certainly be worse. At the Paris Air Show earlier this year, Airbus hauled in more orders than expected. It may even reach its target of 300 orders by the end of the year, something that seemed unlikely last winter, Popova says. But, she adds, in this economic climate, future predictions are foggy at best.