Porsche is in deep trouble. It's attempting to flog a quarter stake to the Persian Gulf emirate in order to manage crippling debts run up by its bodged takeover of VW. Porsche boss Wendelin Wiedeking now looks increasingly trapped – and a hostage to a very uncertain future 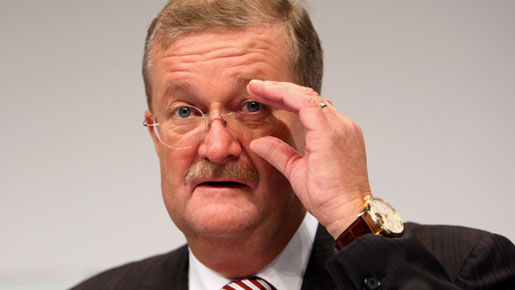 Has Porsche boss Wendelin Wiedeking, 56, crashed the company? Last year he hatched an audacious David vs Goliath move to take over VW, Europe’s number one car maker. But the aborted takeover has now crushed the proud, independent sports car company – only recently the world’s most profitable car company – with more than €9bn in debt plus massive interest payments. The thought of Porsche going cap in hand to the German government for a loan is inimical to the iconic Zuffenhausen-based brand. But it did – and it was turned down. German state-owned bank kfW resisted any move to grant the hugely indebted sport scar operator a €1.75bn loan.

For now, Porsche remains wholly owned by the descendants of its founder, Ferdinand Porsche. But just before European CEO went to press, Porsche spokesperson Albrecht Bamler said negotiations had “entered the final stretch” after due diligence from the sovereign wealth fund Qatar Investment Authority (QIA) – which is considering taking a major stake in the brand – had run its course. Rumours meanwhile abound about what other limited options Porsche has; one possible route is a stake from Daimler, which a German media source recently cited was in advanced stages. For now, the sovereign wealth fund of Qatar appears Wiedeking’s only out.

A hedge fund with a car showroom
Wendelin Wiedeking’s own background does not point to any immediate clues to his current, extraordinarily difficult position. He graduated in mechanical engineering in 1978, though he didn’t take up a professional position at Porsche until 1983 when he became a director’s assistant in the production and materials management sector. Towards the end of the 1980s, Wiedeking moved to Glycol Metall-Werke KG in Wiesbaden where by 1990 he was appointed CEO and chairman. A year later, he switched back to Porsche becoming production director, then chairman and CEO in 1993. Wiedeking performed strongly, turning Porsche into one of the most efficient carmakers in the world. One of his masterstrokes was finessing a VW tie-up to build the same 4×4 vehicle (the Cayenne – VW marketed its version as the Touareg) which took company profits to new heights; Wiedeking also reaped enormous benefits, reportedly becoming the most handsomely paid CEO in Europe with a pay packet of more than €70 million in 2007 alone. In the Daily Telegraph last year, writer Louise Armistead said the Porsche boss laid out his Machiavellian philosophy – and his penchant for breaking rules and winding up other business leaders – in his autobiography, Anders ist Besser (Different is better). The theme of David and Goliath is a favourite, as is his withering lack of respect for politicians. But Porsche remains a company that struggles for R&D investment. That was one of the reasons for Wiedeking attempting to buy VW, though Wiedeking, says Armistead, was heavily supported in his attempt to buy it from his financial chief financial officer, Holger Harter. “Harter’s taste and talent for options trading started attracting attention,” wrote Armistead last year. “As early as 2003, Max Warburton, an analyst at Bernstein, had already coined the phrase ‘a hedge fund with a car showroom’ in describing Porsche.

Meanwhile, Porsche set its sights on taking over the whole of VW. Ostensibly, it seemed an impossible task since the so-called ‘VW Law’ sets the threshold for enforcing a so-called domination agreement at 80 percent control, rather than 75 percent, which is common for German companies.”

And the rest is history, with Porsche engineering a massive short squeeze of VW common stock; Porsche went on to announce it had acquired 75 percent of VW through options. Huge losses by hedge funds, forced to cover their short positions in VW’s common stock, followed. The global meltdown in credit hit Porsche’s plans full head on. The damage inflicted spread even further when the downturn for performance supercars followed. The timing couldn’t have been worse. It’s a cautionary tale for anyone tempted to take financial engineering too far: after attempting to squeeze liquidity out of VW, Porsche itself is now begging for cash. No wonder there is very little sympathy in Germany for Wiedeking. And no wonder VW is tempted to damage – though not destroy – Porsche.

A very public family row
Wiedeking’s other big achievement with Porsche has been to throw open the divisions of an ancient family argument. Wolfgang Porsche, the chairman of Porsche and Ferdinand Piëch, his opposite number at VW, are not just cousins. Piëch is also a massive Porsche shareholder with a 12.8 percent stake. So it’s a fall-out fraught with inter-generational conflict and family politics that hark back the best part of 80 years making any deal – least any form of rapprochement between the two rival marques – hugely difficult. In May, Porsche boss Wiedeking sent VW boss Ferdinand Piëch a letter accusing him of harming Porsche’s interests with public criticism of Wiedeking (allegedly Piëch had called the Porsche CEO a ‘loser’). Company sources close to both men insist that the tension is between the two rival car companies rather than a spat between Piëch and Wiedeking. But however it’s downplayed, the relationship is very tense. And not just for Piëch and Wiedeking. Porsche has since rejected a €4 billion merger offer from VW – farcically, Porsche claimed VW sent the offer to the wrong address.

VW though remains critical to the solution, despite the fractious family infighting. “VW has the cash and the technology. Without VW, there is no solution to the problem,” Arndt Ellinghorst, analyst at Credit Suisse told the FT recently.

Either way, Wiedeking has driven Porsche along a twisty road at huge speed in fast-deteriorating conditions, even for a company that builds the world’s great handling cars. He now needs all his skill – plus possibly a huge slug of Middle East cash – to keep the brand from spinning out of control. Flamboyance is not welcome any more. Just a workable deal.