Changing the face of business communication

If we had invented video communications before the aeroplane, we would waste far less time and money on business travel today 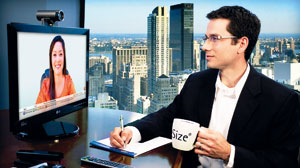 The economics make no sense: flight costs; accommodation; hours of downtime in lounges and in the air. Now, of course, we can add in the punitive carbon cost of international travel. Given the choice, why would anyone bother to fly for business unless the rewards far outweighed the hassle and costs?

One of European CEO magazine’s annual business awards, ‘Telepresence Provider of the Year’, is a clear indication that video is breaking into mainstream business communication. This year’s winner, the HD video conferencing solutions provider LifeSize, has pioneered some of the key technologies that have made video a viable form of interaction, not just for CEOs in Europe, but for businesses all over the world.

Research from Deloitte, published in its ‘Technology, Media and Telecommunications Predictions for 2011’, further affirms the emergence of video into our daily business lives. Deloitte predicts that video will continue to grow steadily, driven by step changes in the technology and substantially lower costs. In particular, the report estimates that approximately 400 million new devices with suitable video cameras will ship in 2011, including smartphones, tablets and netbooks, opening the way to the routine use of video on the desktop or on the move.

The human business
Video is important because humans communicate with far more than their voices. We want to see into someone’s eyes, to pick up on the non-verbal signals that we detect subconsciously.

For all its automation, measurement and accountability, business is still an essentially human process and we ignore the anthropology of human relationships at our peril. As Buck Rodgers, legendary marketing supremo at IBM, famously remarked: “People buy emotionally and then justify with logic.”

Of course, when it really matters, there can never be any substitute for sitting in a room with someone and shaking hands on a multi-million euro deal. It is in the more routine meetings and exchanges that video is making a transformative difference.

Good news for Goodbaby
One example is Goodbaby Group, China’s largest provider of infant and children’s products, which uses LifeSize’s award-winning HD video solutions. The company has design centres and factories in the US, China, Japan and Europe, straddling time zones and cultures.

“During a product discussion, we can directly display three-dimensional engineering drawings and engage in direct interaction,” says Michael Qu, Vice President, Global Operations at Goodbaby Group. “When we discuss product details, we can see exactly what we are discussing thanks to the HD video. The efficiency increase is indescribable.”

Rapid ROI
Michael Qu’s comment shows that video is already overcoming much of the cultural resistance to its use. Once organisations experience the benefits of using video routinely, their culture and practice will rapidly adapt to accommodate and exploit the new medium.

Goodbaby saw a return on investment of just three months from the international travel savings achieved through its LifeSize deployment. The company also reports an increased efficiency in production and design centres, and improved communication and collaboration among all users, from designers through to senior management.

The Goodbaby experience exemplifies the business video story, because the company had previously experimented with video as a communications and collaboration channel. The performance and quality proved unacceptable. In the last few years, however, improvements in network infrastructures and the video technology itself have made video as practical and simple to use as the telephone.

Practical, affordable HD communication
LifeSize has led the way in the delivery of video as a viable, affordable and personable way to communicate. Its technologies minimise the impact on network bandwidth, while delivering the audio and HD video quality to the desktop or the large screen that overcomes the last barriers to face-to-face communication across the world. Businesses of every size can now adopt video that is easy to use, without having to commit to large-scale capital investment and re-engineering of their systems.

Technologies such as the LifeSize Video Center allow people to share knowledge and communicate business-critical information via video, audio and data streaming. It is a powerful one button HD streaming, recording and auto-publishing solution – a single    appliance that makes live and on-demand videos easily accessible from any location and to multiple devices, including the iPhone, iPad and iPod.

LifeSize Bridge 2200 allows organisations to manage and scale video collaboration and communication capabilities as easily as any other network-based service. LifeSize Bridge is designed to allow multi-party calling, so that many users can participate in a call                    simultaneously without compromising the performance of the system.

Still, as Deloitte points out, even high quality – and HD in particular – is rapidly becoming more affordable even for everyday use. The LifeSize LGExecutive combines LifeSize HD communication solutions with LG’s industry-leading monitor technology. LGExecutive integrates with phone and data networks – or converged IP networks – to serve as an HD replacement for a conventional PC screen.

Seeing: into the future
For the world’s weary business travellers, the advent of effective, affordable video heralds a new age of commerce without the stress, isolation and boredom of flights, anonymous  hotels and departure lounges. For organisations looking at their carbon tariffs and corporate responsibility policies, it is a visible and viable way to make rapid savings.

Yet the less tangible aspects of video communication and collaboration may still prove to be far more valuable than these essentially practical concerns. Cultures do not change suddenly, they evolve as new factors take effect, and the ability to converse face-to-face across the world as a matter of routine is a powerful evolutionary influence.

Researchers In-Stat predict that revenue from mobile video calls alone will top $1bn as soon as 2015. Many businesses are already using video technology as part of their daily working lives; in less than five years we may all be wondering how we ever managed without it.