The unstoppable force of telepresence

Telepresence has seen rapid adoption over the past year and is poised to become even more popular in the new decade. By Vinod Kumar, Managing Director and CEO, Tata Communications 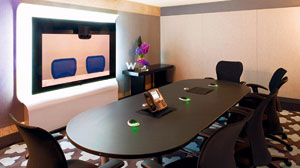 The past few years has seen Telepresence, the high-definition video collaboration tool that boasts real-life meeting experiences through life-like images and immersive audio, finding its way into many a boardroom around the globe.

More and more senior executives are realising that innovative technology, harnessed intelligently, not only save business costs through reduced travel spend, but it also helps to speed up decision-making and improve employee productivity.

According to a recent survey, commissioned by the Carbon Disclosure Project (CDP), US and UK businesses that substitute a fraction of their business travel with Telepresence can cut CO2 emissions by nearly 5.5 million metric tonnes. This is the greenhouse gas equivalent of removing more than one million passenger vehicles from the road over the period of one year, and as a result, achieving total economy-wide financial benefits of almost $19bn by 2020.

Tata Communications’ own experience with Telepresence has shown that the technology brings enormous business benefits. Since deploying Telepresence in 2007, we have seen a reduction in corporate travel spend by 10 percent, even while headcount has increased by 30 percent.

Two years after the first Telepresence rooms were deployed executive travel declined by 39 percent; this decrease translates into an overall reduced carbon footprint of 490 tonnes. This saving would be equivalent to the carbon sequestration from the atmosphere of about 80,000 mature pine trees over the period of one year.

Whilst happy with the initial results from the Telepresence roll-out, an analysis of the travel data collected indicated that more could be done. For example, we knew that London and Paris were key business centres and major destinations for employee travel. Rooms however had not yet been deployed in these locations due to space and budget constraints. Staff at all levels also wanted to make greater use of Telepresence for meetings with third parties, such as customers, service providers and suppliers, but were hindered by the fact that the rooms could not call outside the company.

Taking these insights into account together with feedback from organisations considering or already using Telepresence, we set out to develop a portfolio of managed Telepresence services which would help firms maximise the return on their investment in Telepresence, directly addressing key concerns raised.

Every step we’ve made in the Telepresence space links to our primary objective of enabling and facilitating as many connections for our customers as possible via our public and private rooms. Tata Communications provides the broadest number of global connections, regardless of service provider or operator, ensuring that Telepresence can be used as a truly global business collaboration tool.

The development of our portfolio of Telepresence managed services has seen the adoption of Telepresence accelerated as a result of a number of initiatives that have made the technology an attractive proposition to businesses around the world.

Better accessibility
Communication providers have played a key role in extending the Telepresence network by partnering with hotel groups and service providers to offer ‘charge by the hour’ public Telepresence facilities. Through these public rooms, located in hotels across the world’s major business cities, the technology is made accessible, at an affordable hourly charge basis, to companies without private Telepresence networks.

Tata Communications currently has the largest global network of public Telepresence rooms and is present in 33 locations across five continents, covering 17 countries including the US, Canada, the UK, France, Belgium, Germany, the Netherlands, Kuwait, the United Arab Emirates, South Africa, Kenya, Uganda, India, The Philippines, Singapore, Japan and Australia. Public room partnerships include The Taj Group of Hotels, Starwood Hotels and Resorts, The Rendezvous Hotel Group, Business Centres such as the Dubai world Trade Centre and the Confederation of Indian Industry.

Greater interconnectivity
Global interconnectivity has improved dramatically due to greater cooperation around standards between vendors as well as the establishment of managed gateways and international exchange facilities by global telecom operators. These gateways and exchange facilities expand the Telepresence network by allowing customers of different service providers to be connected.

Decreasing cost
Prices for full-sized, high definition, room-based Telepresence suites have become much more affordable, dropping from hundreds of thousands to tens of thousands of dollars. According to an Ovum report entitled ‘Business Video 2010-14: Chasing Revenues in Managed Telepresence’, equipment prices for Telepresence rooms has decreased significantly from over $300,000 to just $10,000 per unit.

Tata Communications also offers a comprehensive suite of managed services designed to both reduce the cost of implementing and operating a Telepresence solution as well as to maximise service utilisation by delivering a premier user experience.

Game change for business
Telepresence is a game changing technology for businesses. Tata Communications, through our global infrastructure and comprehensive managed services portfolio, aims to bring the technology to as many firms as possible. Our low connection costs and superb user experience will see businesses using Telepresence again and again, for all purposes, without having to shell out huge sums of money.

Organisations today are operating in an increasingly globalised economy. To create a sustainable competitive advantage in the market, it is vital for decision makers within business to recognise the impact that Telepresence can have across an organisation’s business ecosystem, delivering a wide range of benefits to core business operations. While Telepresence is by no means the only way to reduce a firm’s carbon footprint, it is an immediate and tangible way in which organisations and individuals can make a significant difference. The good news is that, if properly deployed, Telepresence will have a significant impact on an organisations bottom line by reducing travel costs and improving employee productivity, giving frequent travellers a better work-life balance.