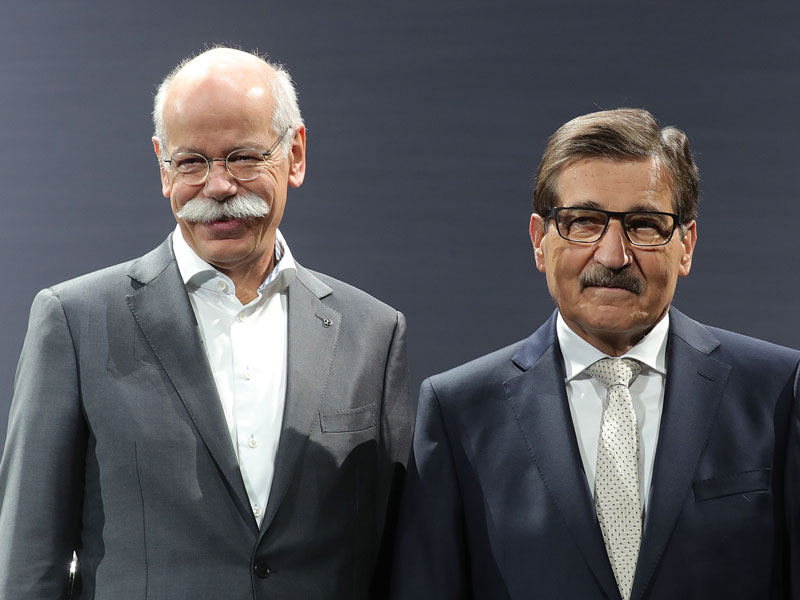 Dieter Zetsche (left) will step down as the company’s CEO in 2019; he will be replaced by Ola Källenius. Manfred Bischoff (right) has recommended that Zetsche succeeds him as chairman of the supervisory board
Management

Dieter Zetsche, the CEO of Mercedes-Benz maker Daimler, will step down in 2019 following the company’s annual shareholders’ meeting.

Ola Källenius, the current development head, will succeed Zetsche, Daimler said in a statement on September 26. The Swede will become the first non-German CEO of the Stuttgart-based firm.

Daimler also proposed that Zetsche, who has headed up the company since 2006 and led it to overtake BMW as the world’s biggest luxury carmaker, would become the chairman of the supervisory board in 2021 after a two-year cooling off period.

Carmakers are jostling to get ahead in the race to implement new technologies, including electric vehicles and self-driving cars

Shareholders will vote on the proposals at Daimler’s shareholder meeting in 2019.

Källenius has long been considered the heir apparent to Zetsche. In its statement, Daimler said Zetsche had stepped down in order to “prepare a suitable succession at an early stage”, a move the company hopes will ease the transition.

At a time when carmakers are jostling to get ahead in the race to implement new technologies, including electric vehicles and self-driving cars, Sven Diermeier, an analyst at capital markets research firm Independent Research, told Bloomberg Källenius seemed like a “logical solution”.

Daimler is making the board “younger and thus giving it new impetus”, said Michael Brecht, the deputy chairman of Daimler’s supervisory board.

Manfred Bischoff, the supervisory board’s current chairman, said: “In Ola Källenius, we are appointing a recognised, internationally experienced and successful Daimler executive as chairman of the board of management of Daimler AG and head of Mercedes-Benz Cars.”

Bischoff added that Zetsche had “played a key role in shaping Daimler AG and has ensured its strategically outstanding positioning for the mobility of the future”, adding that he would lead the board “prudently and successfully”.

Despite Källenius’ strong endorsements, Daimler’s Frankfurt-listed stock fell by more than two percent after the news was announced. Alongside the pressures facing carmakers over newly emerging technologies, Källenius will also have to grapple with global trade tensions and the fallout of allegations that Daimler, along with rivals BMW and Volkswagen, colluded to avoid competing on the development of clean emission technology.