Brains behind the operation

New CFO Gregor Pottmeyer has brought a wealth of experience to the position. But he comes to the job with a heavy task at hand 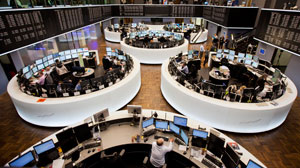 As CFO and a member of the executive board at Deutsche Börse, Gregor Pottmeyer is in a position to help maintain stability at one of Germany’s largest financial organisations, something that is especially needed during the current turbulent times. He brings a wide range of financial and economic expertise and experience to the exchange, along with extensive experience in the commercial sector. His track record of excellent performance has already carried forward to good results at the Börse, one reason his tenure has been extended.

He has held his current position since 1st October 2009. Prior to that, Pottmeyer was a board member with Mercedes Benz Bank AG, Stuttgarg (2004-2009) where one of his responsibilities included credit operations for the Mercedes-Benz finance companies located in Europe, Africa, and Asia Pacific. From 2002 to 2005 he was a board member with DaimlerChrysler Bank AG in Stuttgart where he was responsible for finance and risk management operations. Before that he was Managing Director with Mercedes-Benz Finanz GmbH in Stuttgart (1993-2001). He holds a graduate degree in Business Administration from Saaland University in Saarbrücken.

A recent Wall Street Journal article reported that his contract with the exchange operator has been extended for five years. The article also indicated that the company is developing a new business area and seeking new management for the proposed unit. This comes after the company released its preliminary 2011 sales numbers in early 2012. The report showed sales revenue up six percent to €2.23bn, while total costs dropped one percent to €1.13bn. The company’s adjusted net income rose 15 percent to €833m, and earnings per share were €4.49.

The company’s aggressive growth policy is made possible in large part by Mr Pottmeyer’s leadership in the financial arena. He has stated: “The earnings power of our scalable business model, strong balance sheet and cash position allow us to combine an acceleration of our growth strategy with an attractive distribution policy. We regard the increase of our regular dividend as sustainable and will consider complementary distributions also in the future, subject to operating performance, investment, liquidity and rating considerations.”

One indicator of his leadership is the earnings generated before interest and taxes (EBIT).  For 2010, Deutsche Börse Group reported EBIT of €527.8m; for 2011, the figure was 118 percent higher at €1.15bn. When excluding one-time or extraordinary items such as costs associated with the group’s now-prohibited merger with the New York Stock Exchange, net income was up 15 percent over the previous year, an extraordinary accomplishment in a time of depressed earnings and interest rates worldwide.

The combination of investment leadership and cost-cutting measures at the Deutsche Börse Group appears to have put the organisation in a good position moving forward.

While it is almost a sure thing that the European markets will experience some uncertainty going forward, at least until the situation with Greece and other countries is resolved, the stability and experience Pottmeyer brings to his position should allow him to provide excellent guidance for the Deutsche Börse.