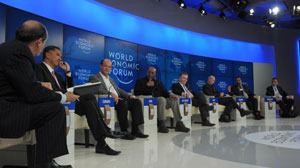 This year’s World Economic Forum meeting concluded recently in Davos, Switzerland. The number of sessions stretched to 260 over the week, with a wide range of subjects being discussed from every angle, by representatives from an equally diverse range of fields. There were several very large companies and multinational corporations represented at Davos, including Google. The overall tone of the WEF discussions tended to be optimistic, considering the number of economic problems currently being experienced around the globe. Many of the delegates considered that, with the application of new and innovative ideas, they were capable of overcoming the current difficulties.

InfoSys, the global IT consulting firm, had some comments on the subject of the future of globalisation. S. D. Shibulal, the company’s CEO, was optimistic for the future of globally operating companies saying, “globalisation is a phenomenon that has been here for a very long time and I clearly believe that will continue.” His comment was made in response to concerns voiced about the future of globalisation in a world where the US might try to discourage companies from moving domestic jobs to cheaper locations in other parts of the world, in other words outsourcing. This is a contentious issue, especially when high unemployment in home countries can be seen to be a direct result of such actions. However, Shibulal told WEF he believes that the overall impact of globalisation is a positive one, bringing employment and higher living standards to developing countries and allowing a larger pool of talent to drive innovation. As a result of such views, many industries remain strongly pro-globalisation and will continue to oppose protectionist measures.

The WEF week also touched on scientific and climate change related issues. Niel Bowerman, a climate scientist, stated: “I’m a climate scientist … every day, I look at data that suggests that my future is going to be challenging in 50 years time. It suggests that if we don’t tackle these problems – now – our entire generation is going to have a huge issue on its hands.”

It is hard to say that global warming has ever been far away from the public consciousness, with climate change scares dating back decades; originally it was thought a new period of global cooling was imminent. However, given the severity of the recent recession, many of those involved in research into global warming may have concerns that thoughts of introducing further climate saving measures may take a back seat when compared to encouraging economic recovery. Niel Bowerman’s comments are intended to remind people that scientific evidence currently points strongly towards irreversible climate change if the effort to reduce greenhouse gas emissions is not sustained. This is particularly relevant at the moment because globalisation and development of heavy industries in previously non-industrialised nations, creates the potential for seemingly ever increasing harmful emissions.