Germany’s energy mix is undergoing a mammoth transition. In the midst of this change, the benefits of photovoltaic power are shining through 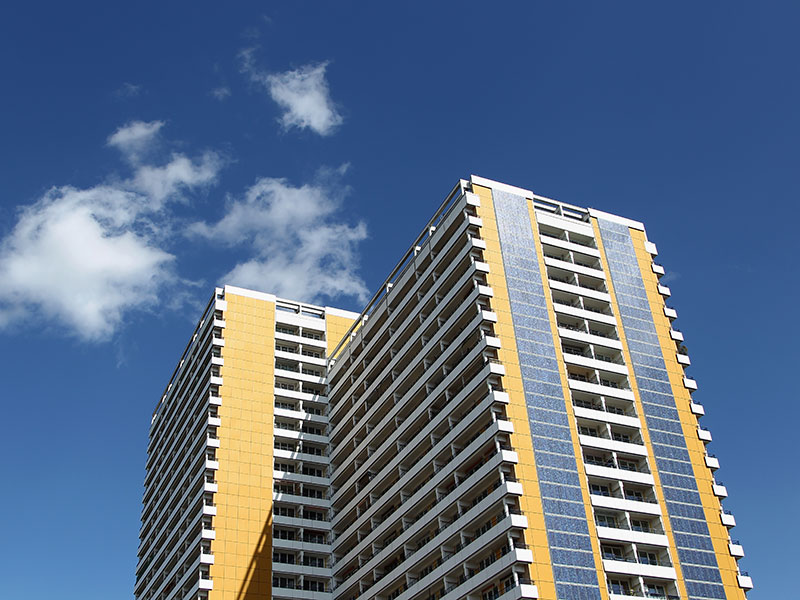 Photovoltaic cells cover the southern facade of an apartment house in Berlin, producing around 25,000kWh of solar-generated electricity a year
Management

Germany’s energy transition began at the start of the 21st century, when the coalition of the Green and Socialist parties introduced the Renewable Energy Act to encourage investment in renewable energy. At the same time, a consensus was reached with utility services to switch off their nuclear power.

For a long time, nuclear energy had been dominating Germany’s energy mix, together with installations fuelled by brown and hard coal. Up until 2005, renewable energy, which was generated primarily through hydroelectric and biomass plants, made up less than 10 percent of the mix.

Following the Fukushima disaster in 2011, the German Government decided to switch off the older half of its nuclear power station fleet immediately and shut down the rest by 2022. This decision fuelled a spike in interest in the construction of photovoltaic (PV) plants, with 7GW of PV capacity coming online in the year following the decision. During this process, the merits of PV became clear in terms of the cost price for installations, which dropped from a kilowatt peak of €4,000 in 2007 to less than €1,000 in 2015.

The breakthrough of PV and wind energy as leading renewable sources has boosted the contribution of renewables in Germany to approximately 30 percent. On sunny and windy weekends, renewables now cover up to 80 percent of demand.

The differential cost issue
Energy prices in Germany have dropped sharply in recent years due to the spectacular rise of renewable energy. As it’s an intermittent resource, solar PV only generates power during daylight hours, when electricity prices are at their highest. Though PV has relatively high capital costs, it has near-to-zero operating costs. This means German power prices have halved to approximately three euro cents per kWh. Naturally, this is bad news for utilities, but positive for consumers – at least, in theory.

In practice, however, only large industries, such as steel and chemicals, have benefitted from lower energy prices, because they use power at wholesale prices. In contrast, smaller industries and households have seen their energy bills rise by around seven euro cents per kWh over the past 15 years.

This is because they have to bear the full cost of subsidies for renewables, namely the differential costs between feed-in tariffs and market prices. As a result, PV installations have become the victim of their own success: as a result of their contribution to lower energy prices, differential costs have increased.

Cost advantages
Energy prices are now set to rise. The closure of the last nuclear unit in 2022 will reduce Germany’s available peak capacity by 11GW, to around 85GW, which is no longer enough to meet peak demand in the country. Furthermore, it’s likely that some of the country’s oldest coal-fired plants may also be closed since Germany is yet to reach its CO2 emission targets. New flexible capacity will therefore be required, and the price will need to cover the cost of around seven euro cents per kWh.

The European Commission’s climate and energy framework has set a goal of cutting CO2 emissions by at least 40 percent by 2030. Germany is still falling short of these targets, and so a sharp decline in emission allowances awarded to coal powered plants is likely. Studies value carbon at €30 per ton – the current value sits below €10 per ton – which should increase prices by at least one euro cent per kWh.

So far, large German utilities have shown little interest in PV power production for a variety of reasons. Primarily, renewable energy comes first in the merit order (a ranking of energy sources in ascending order of price).

The long-term vision of policymakers should be focused on storage, more flexible peak power and increased interconnection

Therefore, it tends to reduce electricity prices and eats into the utilisation and generation margin of conventional power, particularly during peak hours. Second, utility companies prefer to supply their customers with reliable power; large PV installations in Germany rarely have a 10 megawatt peak, whereas nuclear stations have an average megawatt peak of 1,000MW.

Third, and most importantly, big utility companies are slow movers: they misjudged the impact of renewables on power prices, as they ignored the potential of PV. The transition away from nuclear and coal-fired plants has significantly hurt their balance sheets, and so their current role in the renewable energy industry is focused on data management, plant services and grid stabilisation, rather than on asset ownership.

However, with PV and wind parks currently being built for less than six euro cents per kWh, it’s only a matter of time before utility firms also become involved in new-build plants as no other technology has such a low cost.

Size is essential
Consolidation is a logical next step for an industry that grew too fast and attracted players who treated PV as a commercial add-on or an alternative to real estate. The relatively high percentage of less efficient but highly subsidised installations is an important driver of consolidation.

In addition, investments in plants are capital intensive, meaning that the cost of capital needs to be continuously reduced in order for such projects to be successful. In other words, size is essential: maximum purchasing power for equipment, strong balance sheets and sufficient market capitalisation are all necessary to attract institutional investors for whom renewable energy investments offer a secure dividend yield.

PV and wind power have become low-cost champions. While the cost of conventional power is, at best, seven euro cents per kWh, PV and wind can produce power for less than six euro cents per kWh. However, neither of these two technologies is a viable option to entirely replace fossil fuels and nuclear energy, since they are not always available when required.

Nevertheless, the combination of wind and PV already offers a stable source of semi-base load production. However, it still can’t cover peak demand when required, and it can even diminish value on days of low demand. As a result, the long-term vision of policymakers should be focused on storage, more flexible peak power – such as combined cycle gas turbines – and increased interconnection. These factors will turn Germany into Europe’s generation hub, making demand management a part of production.