Superyachts get better as billionaires get richer

The ultimate plaything for the world’s super rich, superyachts are becoming bigger and more lavish each year as billionaires strive to outdo one another 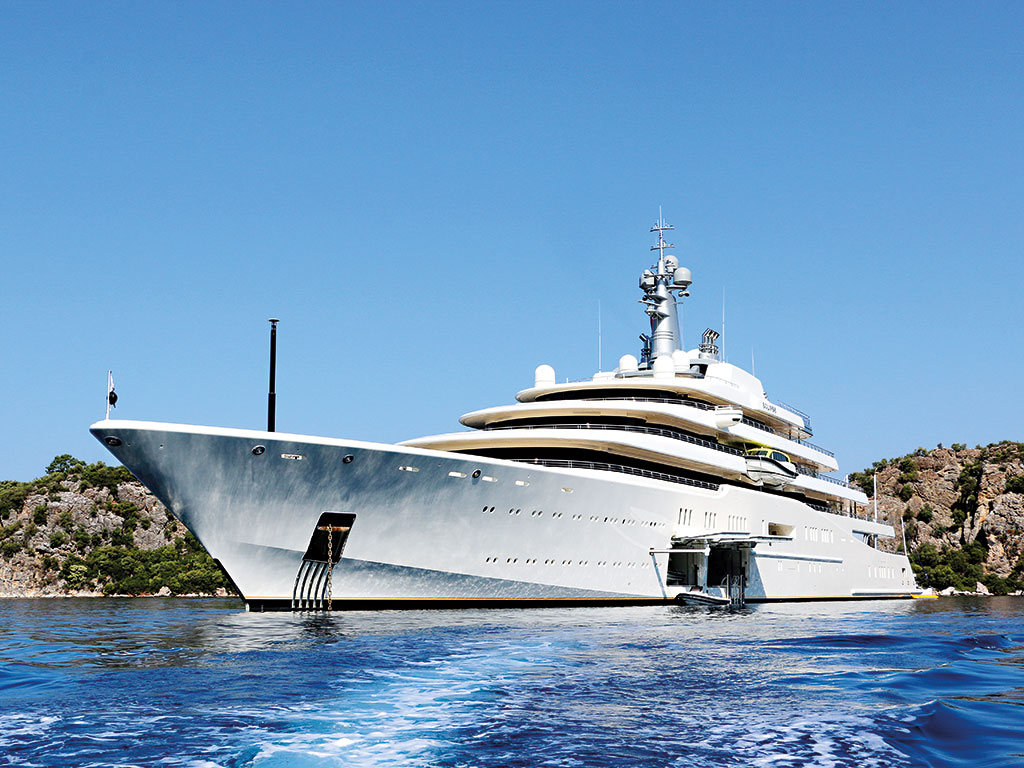 For any self-respecting multibillionaire, it is important to be able to show to the rest of the world just how lavishly wealthy you are. While cars, palaces, jewellery and football clubs might be signifiers of considerable wealth, these days it seems anybody worth a few hundred million euros can get their hands on such things. To truly announce to the world – and, most importantly, other billionaires – that you have arrived, there can be only one luxury investment: a yacht. Or, to be more precise, a superyacht.

To truly announce to the world and other billionaires that you have arrived, there can be only one luxury investment: a yacht

The ultimate sign that someone has reached the upper echelons of the world’s wealthiest, superyachts come in varying degrees of size and extravagance. And, in spite of its rarefied appeal, the industry is seemingly more competitive than all others. Each year, it seems, new superyachts are announced, all designed with increasingly dazzling features that will make anybody that bought one just 12 months previously go lobster-red with embarrassed inadequacy.

Sudden change
Superyachts have changed in size dramatically over the last few decades. In 1999, when industry magazine Boat International published its list of the top 100 yachts, the smallest was 44.83m long. Today, the same spot is occupied by a yacht a little under double that length, at 78.2m.

There are a number of types of superyacht, but they fall broadly into two categories – sailing and motored. The most famous sailing luxury yacht is The Maltese Falcon, which was launched in Malta in 2006. Commissioned and previously owned by US investor Tom Perkins, the ship is one of the largest sailing yachts in the world, at 88m in length. It was eventually sold in 2009 to Elena Ambrosiadou, the founder of Cypriot hedge fund IKOS. However, it is soon to be surpassed by Sailing Yacht A, which is a sailing yacht commissioned by Russian billionaire Andrey Melnichenko. It will be 147m in length and has been under construction since 2012.

Melnichenko, who made his fortune from banking and the steel industry, is also the owner of the motor yacht A, which is known as one of the most iconic in the world. A modernist 119m vessel, the $300m yacht was launched in 2008 and is one of the largest in the world. It has drawn serious attention from commentators, with opinion deeply split. Some have dubbed it ‘the most loved and loathed ship on the sea’.

Owners club
Some of the world’s wealthiest people own vast superyachts, completely designed to their own specifications. While most of them are extremely secretive about their possessions, there are a few notable examples of extremely wealthy people publicly flaunting their huge superyachts. These include many of the world’s tech entrepreneurs of the last 30 years. Microsoft co-founder Paul Allen owns the 126m superyacht Octopus, while one of the last things Apple founder Steve Jobs helped to design was his €100m, 79m superyacht Venus. Oracle Corporation founder Larry Ellison, worth a reported $56.2bn, owns the 138m Rising Sun, which cost over $200m to build.

Another superyacht enthusiast is Russian oligarch Roman Abramovic, who has reportedly spent a considerable portion of his $9.1bn fortune on a fleet of superyachts. His main yacht, Eclipse, is 163m long and was built in 2010, at a cost of €340m. While it was briefly the largest superyacht in the world, Abramovich suffered the indignity of losing that title just three years later, to a new ship called Azzam. Thought to be owned by the President of the United Arab Emirates, Khalifa Al Nahyan, Azzam is a staggering 180m in length, and is thought have cost $605m to construct.

Pretty much all of these superyachts have a startling array of luxury features on board. No longer are mere hot tubs and swimming pools good enough for the super wealthy. Now, the swimming pools mostly have waterfalls and glass bottoms, giving a view of the ocean below. Most also boast helipads, submarines, jet skis, gyms, spas, private cinemas, nightclubs, and enough bedrooms to house an entire extended family and crew. A lot of them also feature extensive collections of art.

Roman Abramovic
For a brief period the largest superyacht in the world, Eclipse was designed by Terence Disdale and built by German firm Blohm+Voss. Costing €340m to construct, the 163m ship launched in late 2009. Owner Roman Abramovic reportedly has a number of other yachts in his personal fleet, and is often seen passing through the Mediterranean on Eclipse. The superyacht includes two helipads, two swimming pools, 24 guest cabins, a nightclub, a mini-submarine, and three smaller launch boats. It is currently the second-largest private yacht in the world.

Khalifa Al Nahyan
The world’s largest private motor yacht was launched in April 2013, having been commissioned by United Arab Emirates President Khalifa Al Nahyan. The ownership of the yacht was not initially confirmed, with rumours suggesting a member of the Saudi Royal family commissioned it. However, Al Nahyan was confirmed as the owner in 2013. At 180m in length, Azzam surpassed Eclipse as the largest superyacht in the world. Costing around $605m to construct, Azzam was designed by Lûrssen Yachts and sports interior design by the acclaimed Christophe Leoni.

Jobs family
Designed by acclaimed Frenchman Philippe Starck and built by Feadship, Venus was commissioned by former Apple CEO and founder Steve Jobs. As with most things Jobs commissioned, the design had to be both unique and eye-catching, as well as minimalist and sleek. Resembling a floating iPhone, Venus cost around €100m to build and is 79m in length. Sadly, Jobs was unable to see the ship launch, having died in October 2011, before it was completed. It is now in the hands of his family, although Starck has since claimed he is still owed €3m from the family for his design work.

Andrey Melnichenko
Another yacht designed by Frenchman Philippe Starck, A has become notorious in the world of superyachts for its distinctive design. Compared to both submarines and stealth warships, thanks to its sleek design, A was described by Starck as “more like a fish than a building”. It cost $300m to build and is comparatively small at 119m in length. However, it sports some impressively lavish features, including a 2,500sq ft master suite, a disco, helipad, three swimming pools, and enough room for 37 staff to live on board. Owned by Russian Andrey Melnichenko, it was launched in January 2008.