Those who cling to the image of the debt collector as a man who bangs on doors would be surprised by Staale Aasestrand, Chief Executive of Experto Credite, a man leading the industry in a user-friendly, technology-orientated direction 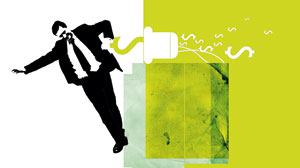 A 25-year veteran of the debt-collection industry, he positively enthuses about the rising levels of compliance imposed on it in the last few years, especially in UK which is fast-expanding Experto Credite’s base of operations. “It’s highly regulated here, which is a good thing, and highly professional, second only to the United States.”

Furthermore, even though the firm achieves its profits from the seriously indebted, he regrets the way that households in certain European countries, UK in particular, have got themselves so deeply into the red. He points out that total personal debt in Britain stands at £1.454bn [€1.71bn,] a sum greater than UK’s annual gross domestic product and, as official research shows, a world record as measured by the number of households.

And far from using strong-arm methods, Aasestrand’s years of experience in the industry have convinced him that it’s far more fruitful in the long run to establish a mutually beneficial dialogue with defaulters.

“We rarely go to litigation,” he explains. “Our success is based on our ability to work with customers. We have to go about our work in a proper and prudent way. We can’t use bullying tactics. We wouldn’t want to and we wouldn’t be allowed to [by the banks or authorities]. We’re dealing with vulnerable people.”

However, as he points out, anybody who borrows money simultaneously inherits an obligation to repay it and Experto Credite deals with what may be called the recidivists of the recession, consumers who acted as though the day of reckoning would never come.

“There are two types of debtors,” explains Aasestrand who established his first debt-collection company in 1995 in his native Norway, co-founded Oslo Exchange-listed Aktiv Kapital, one of the pioneers of the industry, and has held senior positions in Morgan Stanley. “The ones who can’t pay it back and the ones who won’t.”

Debt collection, whether of consumer or corporate debt, has long been a discreet but extremely active branch of the financial industry. In the UK alone, there are 20 million individual transactions a year by members of the trade body, the Credit Services Association, involving £15bn [€17.66bn] by value in distressed debt. And in Europe the receivables management industry generated €2.2bn in profits in 2009 as companies increasingly realise the internal savings available from handing over debt-gathering functions to dedicated and more expert firms.

Experto Credite also undertakes commercial collections on an outsourced basis particularly in the utilities, telecommunications and financial sectors. Indeed executive vice chairman Paul Thompson was once senior credit manager for British Telecom with £1.3bn in receivables. However the main strategy of 13 year-old Experto Credite today is the buying of whole portfolios of distressed consumer debt from the banks. Indeed it’s one of the biggest such buyers in Britain.

In most of these portfolios the average overdue period is at least a year and the banks have given up on them, usually after first, attempting to gather the debt themselves and, second, out-sourcing it. “The quality of the debt is reflected in the price,” explains Aasestrand. “Old debt has a low rate of recovery, so we pay a lower price for the portfolio.”

The main benefit of owning the portfolio outright is time. Instead of having to hand back the portfolio to the banks (the “clients”) after a period of just 3-6 months, which Aasestrand says is too short a period to work the debt properly, Experto Credite is able to devote the next few years or however long it takes to develop a mutually beneficial relationship with the debtors (the “customers”).

“Buying debt is expensive but it gives us control,” adds Aasestrand. “We can manage it in the long term.”

Another advantage of a wholly-owned portfolio is that the debt collector doesn’t have to look over his shoulder. Instead of dealing with client and customer simultaneously, Experto Credite is able to concentrate on the latter. “That way we have more flexibility than banks do to find a solution,” he explains. “We have only the one relationship to deal with.”

The price of a modern and humane debt- collection industry, especially in Britain which is regarded as the European leader, is paid in terms of compliance. Experto Credite boasts no less than three full-time compliance officers and three assistants whose sole function is to see that the rules of the Financial Services Authority, Office of Fair Trading and other relevant agencies are fully observed. Indeed one compliance executive does nothing but sit with the telephone staff to monitor calls and advise on their relationships with customers. (The regulations require that all calls are recorded for future reference.)

Similarly, banks are highly sensitive to any breaches of the regulation that may damage their image and reputation or, worse, provoke fines from the regulators. Thus Experto Credite in common with its competitors has to jump through several hoops before a bank entrusts it with debt collection. In what Aasestrand describes as a “very torrid” process of due diligence, prospective clients will typically make several visits to satisfy themselves about the strength of the firm’s finances, the robustness of its data protection infrastructure, compliance performance, record with watchdogs and the reliability of recovery systems.

In the last few years technology, and especially telephone technology, has transformed the industry. Through predictable dialling systems, improved demographic data and search engines, debt collectors can contact many more times distressed debtors than they did, and at a reduced cost. Experto Credite bespoke Caseflow software means it can manage accounts on a fully automated basis, from the first contact all the way to the last resort of litigation.

In the aftermath of the heavily borrowed run-up to the financial crisis, Aasestrand sees no shortage of business in the medium term. “We expect a lot of distressed-debt portfolios to come on the market,” he predicts. Experto Credite will remain a UK-based firm but will develop new clients outside Britain in growth areas such as Scandinavia and European mainland.