Top 5 European IPOs of all time

Many investors keep their eyes trained on the US for news of large initial public offerings, but there’s been plenty to get excited about in Europe over the past 20 years, too 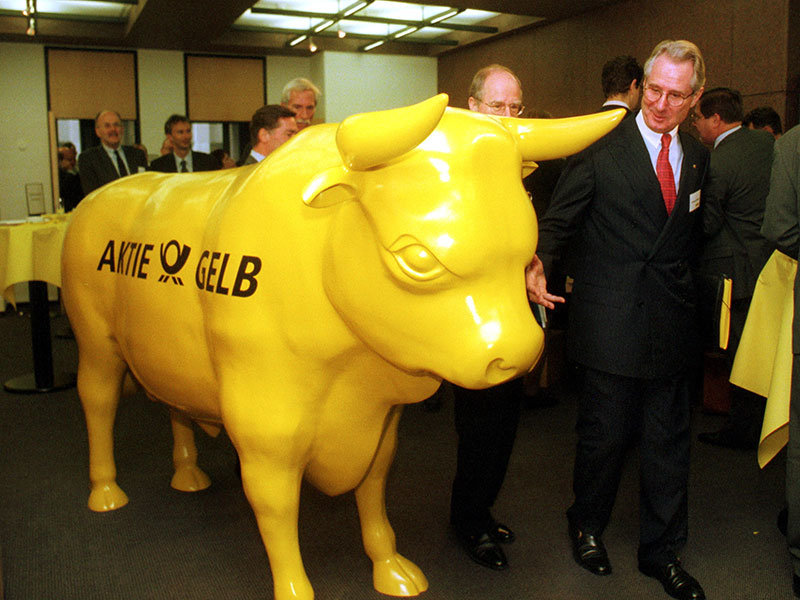 On the morning of its IPO, Deutsche Post planted hundreds of plastic bulls – painted its signature yellow – outside the Frankfurt Stock Exchange
Finance

When the much-hyped topic of initial public offerings (IPOs) hits the headlines it’s usually in reference to American companies. The US boasts the majority of high-value listings, with behemoths such as Visa and General Motors raising billions of dollars in less than 24 hours.

This buzz has been further spurred by the arrival of so-called FAANG (Facebook, Amazon, Apple, Netflix and Google) stocks, representing the five most popular and best-performing tech companies that have gone from tiny backyard operations to multinational monsters in a few short years.

In the midst of all this hysteria, the little continent across the Atlantic Ocean tends to get sidelined. But Europe has generated some impressive IPOs over the past 20 years, with the privatisation of established state-owned companies generating figures to rival the hottest US stocks. To ensure they are duly recognised, European CEO has charted the largest European debuts of all time.

Enel
“It’s big, it’s Italian and it’s coming to the market next week,” wrote MarketWatch in October 1999, when energy firm Enel announced it would be debuting on the Milan and New York stock exchanges the following month. In fact, demand for shares in the state-owned business was so high that the government boosted its original sale volume from 15 percent to 30.

With each share priced at €4.30, Enel’s IPO was tipped to be the largest in history and was expected to raise as much as €18bn. While the company’s initial trading didn’t spark as much interest as expected, it did succeed in taking the top spot in the IPO charts, raising €14.4bn and becoming one of the world’s largest publicly traded electricity utilities.

Deutsche Telekom
The IPO of German telecoms giant Deutsche Telekom in November 1996 was, at the time, the largest in European history and marked the beginning of the dotcom bubble on the continent.

The offering came about as a result of the privatisation of state-owned giant Deutsche Bundespost, which had been set up by the Federal Republic of Germany in 1947. Prior to its IPO, Deutsche Telekom was the monopoly internet service provider in Germany, explaining why investors were so keen to get their hands on its shares.

More than 713 million Deutsche Telekom shares were released across the Frankfurt, Tokyo and US exchanges on November 17, 1996. Of these, 623 million were initially sold, representing roughly a quarter stake in the firm and raising €11.43bn.

The stock was so popular that investors who bought at the start of trading were able to sell for a 19 percent profit just an hour later. Not only that, the Frankfurt Stock Exchange extended its trading hours for a whole week following Deutsche Telekom’s IPO in order to cater for demand.

Glencore
Anglo-Swiss commodity trading and mining firm Glencore certainly set its sights high with its IPO in 2011. Not only did Glencore seek to raise €8.8bn from its listing on the FTSE 100, it also expected to become the third company in history – and the first in 25 years – to enter the blue chip section of the index on its first day of trading. Thanks to a strong cohort of cornerstone investors, Glencore was able to hit both of these targets.

On May 4, 2011, the commodities trader floated 1.14 billion shares – priced at around €6.20 each – making it the largest ever IPO on the London Stock Exchange. The stock market debut also forced the famously secretive company to reveal key business data, including the exact size of its largest stakeholder’s share, which had been concealed since Glencore’s foundation in 1974. Glencore made these revelations by publishing a 1,600-page document in the lead up to its IPO.

EDF
The French Government took a huge gamble with its decision to float power group EDF on the stock market in 2005. Its IPO came just one day after French Prime Minister Dominique de Villepin pulled the plug on the long-anticipated float of nuclear power plant maker Areva and overlapped with the cancellation of satellite operator Eutelsat’s IPO, which suffered from a lack of investor demand. Moreover, investors were galled by the €29.50 to €34.10 share price, which was higher than the expected €29, and bourses dipped as a result.

Despite these obstacles, EDF was able to raise €6.7bn by floating 206 million shares priced at €32.29 on November 21, 2005. It was the largest IPO for more than four years, valuing EDF at around €60bn and making it one of the most valuable listed utility groups in Europe.

Deutsche Post
Germany’s national postal service pulled out all the stops to drive interest in its IPO in 2000. In the weeks leading up to the state-owned firm’s debut on Frankfurt’s DAX index, Deutsche Post launched a €51.9m TV marketing campaign featuring German TV personality Thomas Gottschalk and offered substantial discounts to retail investors.

On the morning of November 21, the day of its IPO, the company even planted hundreds of plastic bulls – painted Deutsche Post’s signature yellow – outside the stock exchange offices in an unsubtle attempt to herd investors towards its shares.

Initially, these tactics appeared fruitless – Deutsche Post shares, priced at €21, dipped below their listing price in the first few hours of trading. Luckily, a slew of orders from Deutsche Bank and UBS Warburg drove values into the black, with the stock ending its first day of trading at €21.40, up 1.9 percent. This meant a hefty €6.6bn raise for the postal group and instant blue-chip status.