European countries are increasingly reviving long-defunct plans for compulsory national service. In the face of societal divisions and rising regional tensions, Courtney Goldsmith asks what impact these new policies could have 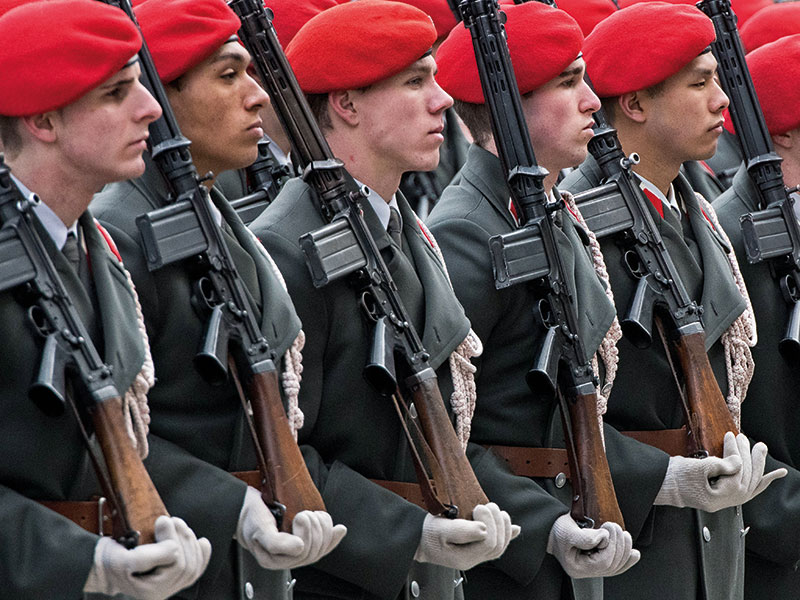 The end of the Cold War in 1991 brought on a consensus that large-scale armies were a thing of the past. With modern, hi-tech weaponry and the evaporation of urgent military threats, countries across Europe began scrapping compulsory military service programmes in favour of smaller groups of highly trained professional recruits.

Throughout the 1990s and early 2000s, military conscription was phased out in countries including France, Italy, Spain, Belgium, Portugal and the Netherlands. Other nations trickled in after that: Lithuania suspended its national service programme in 2009, followed by Sweden in 2010 and Germany in 2011.

These programmes are no small undertaking. Defence budgets are already under strain across Europe, and military personnel are stretched to their limits without the introduction of tens of thousands of new recruits to train. What’s more, a poorly designed scheme can leave lasting economic and social scars.

Healing divisions
Over the past few decades, a small handful of European countries have resisted calls to rip up their national service programmes by claiming they stimulate social cohesion. In Switzerland, for instance, citizens have decisively voted against plans to eliminate the draft three times over the past quarter of a century.

While more countries are now adopting compulsory national service policies, each has a unique reason for doing so

Others are embarking on a mission to bring compulsory national service back in order to repair social divides. French President Emmanuel Macron was the latest to revive such a programme in the hopes of promoting unity across his country.

Conscription in France has a long and spotty history, but the modern form of universal national service dates back to 1905. Although it was scrapped around 1996, a YouGov poll in February 2018 revealed that a majority of French people – 60 percent – were in favour of a mandatory national service of between three and six months.

Macron announced a new national service plan in the summer of 2018 that was “very light on the military side”, according to Elisabeth Braw, an associate fellow at the Royal United Service Institute, an independent think tank for defence and security studies. She told European CEO: “It’s essentially an effort to get teenagers to do something for society.”

Macron’s planned national service programme includes a month-long placement for all 16-year-olds, followed by an optional second phase of a placement between three and 12 months in the armed forces or at a social care institution. A trial will be held in 2019.

France’s plan is far from perfect, however. Critics told The Daily Telegraph that even a watered-down version of the programme would be hugely expensive while offering little benefit, and potentially even detracting from French defence operations. Generals, meanwhile, described it as a “folly”.

But the government insists the plan will imbue teenagers with a sense of national identity and responsibility. William Galston, a senior fellow at the US research group the Brookings Institution, said national service schemes promote social cohesion by bringing people of different economic classes, ideologies and ethnicities together.

“When people are engaged in shared activities across these lines of division, they are more likely to think of others as part of their ‘team’, defined by their shared purposes rather than background differences,” Galston told European CEO. Braw agreed that such programmes are “certainly a good way of creating more cohesion” among a divided society. And while France grapples with one of the highest youth unemployment rates in Europe, a sense of community and solidarity will surely be critical to holding the nation together in years to come.

Norway’s way
While more countries are now adopting compulsory national service policies, each has a unique reason for doing so. For instance, in 2015, Lithuania brought conscription back for reasons of national security, while Sweden revived its programme after just seven years at the start of 2018 because the country could not recruit enough volunteer soldiers.

Sweden’s new system was modelled on Norway’s, which draws from a mix of volunteers and recruits. Norway, which was the first NATO country to draft both men and women, has a very successful programme, according to Braw, because of its simple solution to a persistent problem.

While the country needs volunteer soldiers to fill its army, recruiting every 19-year-old would overwhelm its resources. So, each year the Norwegian Government selects 10,000 of the most promising 19-year-olds from a year group of around 60,000. This gives those selected for the programme a feeling of achievement.

“If you have done national service, it’s a huge plus on your CV because it means you’ve been selected by the government as one of the best and brightest in your year group,” Braw said. “I think that’s absolutely the way to do it.”

Other conscription policies are less successful. Greece, for instance, has universal conscription, which means all men of a certain age are recruited for a year. But having such a large group of conscripts merely strains the military’s resources and leaves the youths involved feeling disillusioned and unhappy.

When a programme is poorly designed, participants come away with a sense that they have wasted their time, which discredits the very government behind the policy, Galston said.

Under the Norwegian model, the armed forces get the top recruits without imposing too much of a burden on the military. But much still depends on a particular country’s political culture, Galston said: “More solidaristic societies will tend to respond favourably to a universal mandate, while many individuals in more liberal societies will resent coercion and regard the mandate as infringing on their liberty.”

Additionally, researchers have spent decades looking into the economic impact conscription has on individuals and the wider society. A 1995 study published in the Journal of Business and Economic Statistics evaluated the cost of conscription in the Netherlands and found that serving in the military was roughly equivalent to the cost of losing a year of potential work experience.

Another study in the IZA Journal of Labour Economics in 2015 found that a system of compulsory military service reduced a conscript’s probability of obtaining a university degree by almost four percentage points. It also had a negative and long-lasting effect on an individual’s earnings: conscripts lost about three to four percent of their wages by serving in the military.

“A system of mandatory national service is a major undertaking,” Galston said. Designing a suitable system involves large numbers of people, an enormous amount of careful organisation and administration, and considerable expense.

A new model
Compulsory national service could certainly be a useful tool for unifying societies at a time that feels more divided than ever. Politicians are right to consider dusting these policies off and altering them to fit a new generation of potential recruits. Braw said: “The reality is that if you don’t have national service, you don’t have anything else that brings people together.”

But national service should not be conflated with military service. Systems of universal military conscription, if poorly designed, can leave conscripts and the armed forces that must train them feeling like they have wasted their time and money. While a case can be made for Norway’s model of national service, following the example of a country like Greece could result in long-term negative implications on both an individual and a wider economic level.