Once the raucous smoking dens of society’s elite, the gentlemen’s clubs of the past have been transformed. Today, they cater to the flexible workers and budding entrepreneurs of the social media generation 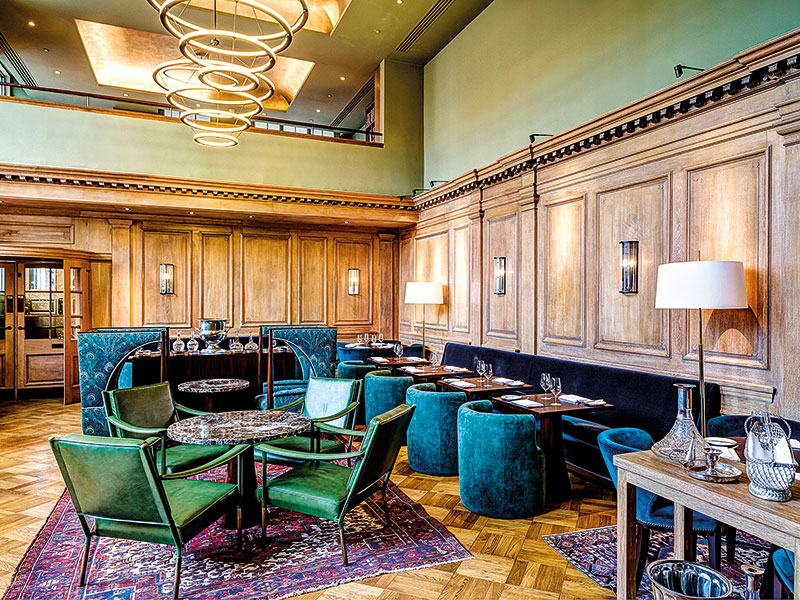 In the cavernous, smoke-filled rooms of the gentlemen’s clubs of the late 1800s, men would gather after work under the light of gleaming chandeliers, surrounded by fine oriental rugs, wine-coloured Chesterfield sofas and plush wing-back chairs. Here, they could swill whisky, play billiards and relax with like-minded aristocrats.

But these stuffy, labyrinthine clubs have increasingly become monuments to the past as new and exciting players firmly establish themselves as a fixture in the Millennial routine.

In other words, standards are changing: while well-off Millennials still want the prestige and exclusivity offered by private clubs, they are also looking for a holistic lifestyle experience. This could include a technologically advanced workspace, a sophisticated spot in which to network and drink, or a dedicated area for fitness and wellness.

While legacy clubs still exist in dusty old buildings, young entrepreneurs are eschewing the cigars and pageantry in favour of airy, modernised townhouses where business and pleasure blend together seamlessly.

Looking the part
What began as a trickle has turned into a surge: over the past five to 10 years, huge rafts of next-generation private members’ clubs have started to take shape around the world.

While well-off Millennials still want the prestige and exclusivity offered by private clubs, they are also looking for a holistic lifestyle experience

“There [have been] as many clubs opening up in the last 10 years as there were in the early 1900s,” said Zack Bates, CEO of Private Club Marketing, a membership consultancy firm that advises clubs on how to attract modern consumers. “And when you get into London, you go back even further – you’re in the 1800s.”

London’s West End was once the beating heart of the gentlemen’s club trend: the city’s first private members’ club, the ultra-exclusive White’s, was established in 1693. By the turn of the 20th century, there were some 200 gentlemen’s clubs in London, mostly clustered around Pall Mall and St James’s Street – an area that became known as ‘clubland’.

But modern private members’ clubs are making their own mark on the city. “As of yet, 20 or 30 [clubs] have probably opened since 2015, and they’re all still going,” said Gary Witham, a director in the hotel agency team at global real estate firm Savills. “Nothing’s gone bust.”

According to Charley Allen, a surveyor in Witham’s team, many clubs have found success by tailoring their offerings to a niche group. For instance, 3 St James’s Square specifically focuses on health and wellness, utilising the most advanced technologies on the market, such as 3D body scanners and DNA analysis.

Meanwhile, 67 Pall Mall is a wine lover’s paradise: the club’s cellars are home to some of the finest and rarest wines in the world. Even the renowned London nightclub Ministry of Sound has opened its own private members’ club, the Ministry, to provide lovers of art and music with a space to gather and create.

While each club has its own feel, sleek design is a constant. Natural lighting, open spaces, modern furniture, lively greenery and careful craftsmanship are all hallmarks of the modern club. “The new clubs are ‘Instagrammable’, and that’s something the older clubs are trying to keep up with,” Bates said. “Young people want places that are beautiful.” As a result, both cocktails and workspaces must look good enough for the #nofilter age.

Making it work
In the mid-1700s, the English writer and critic Samuel Johnson coined the word ‘unclubbable’ in A Dictionary of the English Language. The word referred to people who were not fit to be a member of a private club – or, as the Collins English Dictionary later defined it, those who are “socially inept” and “unrefined”.

Younger generations want to be able to enjoy a cocktail while networking, and then open up their laptops to do some work

Centuries ago, class and gender were key criteria for joining a private members’ club; today, even as they promise customers an elite environment, many clubs are working to become more inclusive. For instance, the Conduit, which opened its doors in October, differentiates itself through unique membership standards. According to club co-founder Rowan Finnegan, these measures are designed to ensure that those joining the community have a “proven track record in systemic change”.

Finnegan’s aim – along with fellow co-founders Paul van Zyl and Nick Hamilton – was to create a space where social entrepreneurs, business leaders, philanthropists and members of civil society could come together to solve the world’s biggest problems. In fact, applicants to the Conduit are asked to provide evidence of having “tangible experience in social impact or social enterprise”. Discount rates are available to students, those working in non-profit sectors and those under the age of 33.

A dedicated workspace is also an important fixture in a modern club. Historically, private members’ clubs were sacred areas where a man could escape the pressures of his family and his work – business was strictly taboo. In the age of smartphones and flexible working, however, access to a remote office is one of the clubs’ key draws. Younger generations want to be able to enjoy a cocktail while networking, and then open up their laptops to do some work.

While co-working spaces like WeWork have also boomed in recent years, private members’ clubs staunchly differentiate themselves. Allen said that one club she had encountered believed its unique selling point was the fact that its offering went beyond what a co-working space could provide, giving members a “rounded package, as opposed to a glass box”.

Sustaining the trend
New private members’ clubs are not all about looking inward, however. Millennials have long been recognised as a purpose-driven generation; unsatisfied with big pay cheques, they want jobs at socially responsible companies that reflect their values.

The Conduit’s van Zyl told European CEO: “[Our club is] a permanent home for exceptional individuals who are passionate about positive social change. Although the world faces several existential challenges, we also possess the combination of innovation, science, capital and creativity to enable us to produce systemic solutions.”

Another benefit of private clubs is the built-in support network they offer. A number of women-only clubs, for example, offer career or personal development programmes. The Wing, a US-based club for women, aims to help its members advance professionally, economically and socially.

The club, which plans to open a branch in London soon, encourages members to take part in direct action on social issues and volunteer programmes. Similarly, the Women’s International Club of Paris was created to enable women of different nationalities to share their culture with one another. According to its website, its members represent more than 40 different nationalities.

Despite their current success, though, there are still questions around the longevity of many new clubs. Daniel Mackernan, Director of Licensed Leisure at Savills, told European CEO: “If you look in the bar or restaurant world, somebody launches a new concept and five years later it’s old hat and they’re on to something else.

“The new clubs are essentially lifestyle brands. Whether they can maintain that, especially if they keep opening at the same rate, will be an interesting thing to look at.”

Even today’s most successful clubs have centuries to go until they become as widely recognised as White’s. But whether or not they stick around for hundreds of years, modern private members’ clubs have succeeded in transforming an outdated model into one that feels fresh and relevant. Long gone are the stale gentlemen’s clubs of yesteryear. Today’s clubs are founded on a new set of principles: inclusivity, flexibility and empowerment.