António Horta-Osório performed minor miracles at Banco Santander, and hopes were high that he would do the same at Lloyds. Things aren’t exactly going to plan however, his tenure being besieged with problems 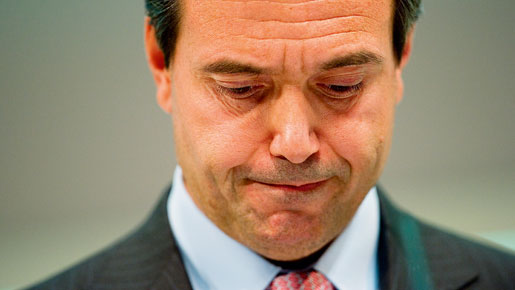 Some people just “have it”. Antonio Horta-Osório is one such person – or at least it appeared so at the time when he was appointed CEO of Lloyds. When the news broke in November 2010 that the Portuguese hotshot was to replace the wildly unpopular Eric Daniels, Lloyds’ shares jumped by 3.3 percent. The bank has seen little good fortune since, with Horta-Osório showing no signs of transporting the bank to its former glory. Now on medical leave due to ‘extreme fatigue and stress’, this could be one of the most disappointing recruitments of all time.

Evidently pleased at the time of taking the position, the glossy new-recruit said that he was “honoured” to have been brought onboard, and then went on to promise that he’d make it his mission to support the UK economy. But as soon as his tenure had begun, it became apparent that the banker was just as inclined to look after his own interests as those of the bank.

Calming public disquiet
Public fury ensued when headlines emerged that Horta-Osório had negotiated a spectacularly beneficial pay packet from his new recruiter, which is partially backed by the UK taxpayer, as it’s 41 percent state-owned. The bank pledged him millions in shares and pension payments, overly generous gestures that added to the already hefty annual pay deal, money that will reach his bank account regardless of his performance or the returns he generates for the bank’s shareholders.

The price for bagging Horta-Osório – a character with charm and political graces, coupled with a good business sense – has been extortionate, although the initial deal merely represented a “golden hello” to convince him that he’d taken the right decision in leaving Santander, and that he hadn’t been lured over to Lloyds for nothing.

The package is said to be on par with, if not higher than, the eye-watering deal that saw £5m in shares being awarded to Stephen Hester, Chief Executive of Royal Bank of Scotland – another sum that taxpayers footed the bill for. Trying to calm furious critics, Sir Win Bischoff, Lloyds’s chairman, insisted that Horta-Osório’s pay deal was a far cry from the sum he would have been paid had he stayed with Santander – and the package is said to have been negotiated after extensive consultation with shareholders, including the government’s UK Financial Investments.

Falling short of expectations
Fast forward a few months into Horta-Osório’s tenure at the bank, and the proportions of his pay packet seem even more overblown as Lloyds struggles to recover. Horta-Osório is now facing the humiliating task of desperately trying to rid the group of over 600 bank branches, on direct instructions from Brussels. Lloyds has been given to the end of 2013 to complete the sale, and aside from the bank branches, internet bank Intelligent Finance, Cheltenham & Gloucester and the TSB brand are also up for sale. The Lloyds boss says a slew of credible bidders have shown interest, and he was hoping to agree on the sale by the end of the year.

Hopes were high that Lloyds’s new CEO would perform miracles at the bank and that his commercial prowess and general ways with business would wipe out any remaining respect for his predecessor. After all he’s the man who’s successfully masterminded Santander’s portfolio in the UK, starting with Abbey National and later adding Alliance & Leicester as well as the deposit base of Bradford & Bingley. He’s also been lauded for his achievement that saw Santander increasing its lending to small businesses in the UK, something that the government hoped could be replicated at Lloyds.

But it seems he doesn’t possess the superpowers everyone had hoped for, and his promise to boost the UK economy has so far amounted to nothing. To his credit, Horta-Osório has never attempted to keep up appearances, and publicly predicted a period of “modest growth for several years”. Lloyds’ shares won’t start selling like hotcakes anytime soon, despite its strong position as the market leader in UK retail banking.

Fleeing a sinking ship
It’s not only tumbling share prices that have plagued the company since Horta-Osório stepped in. The executive board is depleting, with the departure of both Helen Weir, the former head of retail banking, and Archie Kane, who was in charge of Lloyds’ insurance business. A third key member of the executive team announced his resignation in September 2011, acting CEO − and former Finance Director − Tim Tookey. Quite a loss to the company, Tookey was seen as one of the instigators of a £20bn refinancing project that was set in motion two years ago, which followed the ill-advised HBOS takeover and subsequent bailout.

Rumours have it that Tookey, who is said to have been a close ally of former Lloyds Chief Executive Eric Daniels, and Horta-Osório didn’t get on, an allegation that Tookey has fiercely denied. “There’s been absolutely no disagreement on strategy between Antonio and me at Lloyds. I’ve greatly enjoyed developing the strategy with Antonio and bringing it to the market at the end of June. Now is the right time to consider a different challenge,” said Tookey in a statement as the news of his resignation was announced. Tookey will leave Lloyds at the end of February 2012.

From bad to worse
To be fair, Horta-Osório hasn’t been given a fighting chance to prove himself at Lloyds. He stepped in as executive director in January 2011, before climbing up the career ladder further to land himself the CEO position two months later. He started his career at Citibank Portugal, where he served as head of capital markets. At the same time, he worked as an assistant professor at Universidade Catolica Portuguesa, which gave his CV a welcome academic slant. He then moved on to working for Goldman Sachs, working in the company’s New York and London offices.

The fear now is that he won’t return to the Lloyds at all after going on medical leave due to stress, apparently through being overworked. Lloyds’ market value decreased by £930m when the news was announced and its shares plummeted by 4.4 percent. He has been ordered by doctors to rest for between six to eight weeks, but City sources say he is unlikely to return. The announcement caused turmoil within the banking group which now faces uncertainty over who will steer the ailing company into calmer waters. After surviving just eight months at the helm of one of Britain’s toughest jobs, one wonders what possessed the man to leave the safe haven that is Santander in the first place.