Returning to Lloyds late last year, the embattled and bonus-free CEO takes the bank into one of the industry's most volatile periods 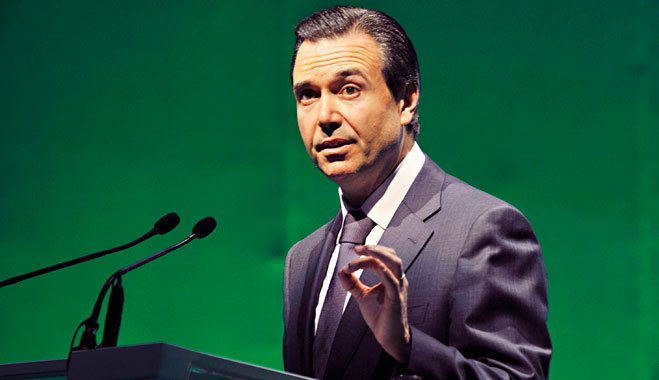 The chief executive of Lloyds Banking Group, has recently returned to work after taking an extended leave of absence due to exhaustion. Since coming back to the bank, Horta-Osorio has made a number of remarks that provide an insight into his views about the economic future of the UK as well as the outlook for the world economy.

Horta-Osorio has had the task of helping to restructure Lloyds after the bank posted historic losses exceeding £3bn in 2011. Despite the huge numbers, Lloyds began rebuilding immediately afterwards by reducing its activity in wholesale funding markets. The bank actually posted a profit during the last quarter of 2011, setting the scene for a gradual recovery. According to Horta-Osorio, the bank will continue to deduct repayments of PPI over the rest of the year, in order to dispose of worthless assets that remain on the books.

Amid growing dissent about the size of executive bonuses being paid, despite poor performance, Horta-Osorio agreed to turn down his scheduled bonus, due to the bank’s poor results and his extended time away from the company. “As chief executive, I believe my bonus entitlement should reflect the performance of the group, but also the tough financial circumstances that many people are facing. I also acknowledge that my leave of absence has had an impact… for shareholders… I have decided to request that the board does not consider me for a 2011 bonus”, he said at the time.

According to Horta-Osorio, the current economic environment leaves many concerns for financiers. He went on to suggest that the bank would not be able to meet some of its financial goals, as originally expected, but declined to issue a “profit warning” for the year. However, speaking about the economy as a whole, Horta-Osorio said that house prices would remain “broadly flat” through 2012 and 2013 and the economy would only post a “fairly modest” level of growth during the latter part of 2012. Speaking on the company’s dividend situation, Horta-Osorio is keeping a cautious view of the future. The executive says that the announced target of a 14.5 percent return will be “delayed beyond 2014” and that it is “unclear” when the bank will be paying out dividends again.

In the meantime, Lloyds may need to boost some of its operations by accessing loans from the ECB. Horta-Osorio said the central bank’s three-year low interest commercial loans could help “ring-fence (Lloyds’s) non-core European assets” and that obtaining the loans “would make sense for the company’s euro assets”. Economic analysts expect that the ECB will issue over £400bn in loans to Lloyds to help the bank shore up its bottom line. The bank is more than 40 percent owned by UK taxpayers.