The brand new CEO at Porsche, he is anything but a beginner in the automotive industry, as Jane Bordenave finds out 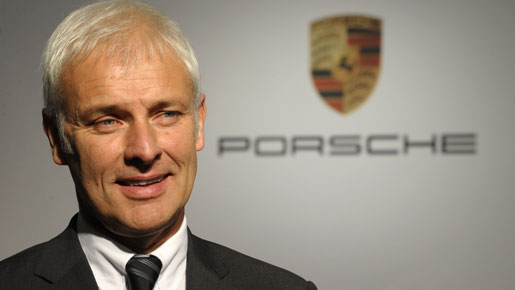 Porsche is one of the most famous luxury car manufacturers in the world. The company will celebrate its 80th birthday in 2011, during which time it has grown beyond the borders of its native Germany and is sold in every continent. The CEO of this prestigious firm is Matthias Mueller, who has his own impressive automotive pedigree.

Looking at Mueller’s education, one wouldn’t think that this was the obvious man for the top job at Porsche. After finishing his compulsory education, Mueller initially trained as a toolmaker, before taking a degree in information technology when in his early twenties. That he chose this course of study while it was still in its formative years is perhaps a glimpse of Mueller’s forward-thinking nature – an attribute that would lead to his later success.

Once he graduated, Mueller embarked upon his impressive career in the Volkswagen family, joining Audi in 1977. Within seven years of joining the company, at only 31, he had risen to become Head of Systems Analysis. But it was when he became head of the A3 vehicle project that Mueller clocked up his first major triumph.

This very popular car was first put into production in 1996 as part of a larger revival of the Audi brand, however Mueller was involved right from the inception of the project in 1993. This model was and continues to be a very successful line and contributed to Mueller’s appointment as Head of Product Lines for both Audi and Lambourghini, where he remained for four years. It was this experience that was key to his appointment on October 1, 2010 as CEO of Germany’s most famous sports car brand, Porsche.

Porsche was founded in 1931 by Austrian engineer Ferdinand Porsche, who would later design and produce the Volkswagen Beetle. This early co-operation started a relationship between Porsche and Volkswagen that continued through the decades. In 1969 the two companies collaborated to make the VW-Porsche 914 and seven years later made the Porsche 912E and Porsche 924 together. Porsche’s signature 4×4 the Cayenne, which was launched in 2002, actually shares its entire chassis with the Volkswagen Toureg and Audi Q7. But the two companies had remained separate entities, that is until 2005, when Porsche took an 18.65 percent stake in Volkswagen Group and prevented a rumoured takeover of the company.

Over the next four years, Porsche increased its stakes in Volkswagen Group to 50.76 percent. However, Porsche found itself with massive debts and unable to raise the funds needed to acquire the 75 percent share it required to take control of the company. In a reversal of fortunes, a new merger has been put in place, with Volkswagen Group instead taking control of Porsche.

This merger will not complete until 2011 and it will be Mueller who will be overseeing the successful completion of the deal. Indeed, his appointment is seen by many as being an intrinsic part of the merger – he is certainly a Volkswagen insider and knows how Porsche can fit into the Group’s structure.

One of the ways in which Mueller is putting this knowledge into practice is by looking across brand borders to increase co-operation and reduce costs. While the existing relationship with Volkswagen’s designers and factory will certainly continue, it is Bentley where he has set his sights. In an interview with Autocar magazine, Mueller said that the two firms should be sharing platforms and knowledge, which would improve its economies of scale. “What we want to do, in conjunction with Bentley, is to have a common architecture, a common performance in purchasing, and so on,” he said. “That is just an offer to Bentley; you have to understand. Everybody will be keen to get synergies and reduce costs, and at the end of the day, have a better revenue.”

Only months into his appointment as CEO of Porsche, Mueller is already making other exciting brand announcements, not least of which is his promise to focus more strongly on China. Speaking to the Financial Times in September 2010, he said the company had “a flurry of ideas on how to interest Chinese customers in sports cars” – while high-earning Chinese customers are enthusiastic about premium cars like Porsche, they often prefer to travel in chauffer-driven vehicles.

This is a major challenge that Mueller and his team need to overcome – despite having 35 percent share in the €55,000-plus luxury sports car market, the firm only sold 674 Porsche 911s in the year ending July 2010. Amongst the solutions being considered are setting up a number of event stores and building a test track for customers to use before   purchase. The company is also looking to capitalise on increased demand for sports cars from younger people around the world.

Mueller has been brought into the fray at a pivotal time in the company’s history,            during what some industry insiders have called a “one year journey of self discovery”. It is too early to say what impact exactly he will have on the company, but his fresh ideas and pan-group outlook are driving Porsche forward in a new direction. Where the journey ends, we do not yet know, but with Mueller’s knowledge and enthusiasm for the                 automotive industry, the future – Porsche’s future – is a wide open road.