The Russian Railways CEO has all the credentials that fits with Russia's modern authoritarian corporate state. He's a man the West needs to watch 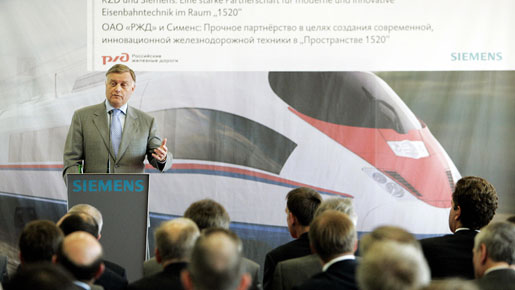 This ex-KBG spook is discreet, bright and endowed with a potentially huge powerbase. Vladimir Yakunin has a neighbouring lake-side dacha with prime minister (and former president) Putin. He’s often mentioned in the same breath as other successors to his all-powerful boss. However it’s unlikely railways CEO Yakunin will have the chance to get too distracted with any power struggle – for the moment. Burly, granite-faced Yakunin is tasked with overhauling Russia’s sprawling railway network Russian Railways (RZD), and by any account that’s a mammoth job.

RZD employs 1.2 million people with 55,000 miles of track spread across more than 11 time zones. It’s the biggest transport company anywhere in the world, and it’s increasingly the backbone of the troubled Russian economy. Putin wants Yakunin to give him a cost-efficient transport system that’s on a par with anything in Europe. He also wants a transport system that can rival air travel for efficiency as well as allowing cargo to flow rapidly between Asia and Europe. Putin is also asking a heck of a lot from Yakunin. But is it a job that will keep him busy enough to tempt him from presidency succession planning?

No one knows the answer to that question and the recent explosion on the Nevsky Express passenger train by terrorists in November taking 26 lives will keep Yakunin even busier – for the moment.

One woman man
“I know my limits,” Yakunin told an interview with Der Spiegel in 2007. “I have never sat down in front of a sheet of paper and written down which steps would have which consequences for my career. Besides, I am still in love with my work as the head of the railroad, and when you’re in love you don’t ogle other women.” He can’t be accused of disloyalty either. Putin, he acknowledges, has massive public approval still. “America and Europe make a big mistake when they interpret Russia’s strength as aggression. Our people sense the injustice of this criticism, and it leads to a collective rejection of the West. Putin has approval ratings of over 70 percent. Where else in the world does that exist? People like his ideas.”

Yakunin though has the disadvantage of being relatively unknown in the public domain, unlike bigger names like president Dmitry Medvedev and defense minister Sergei Ivanov. He’s almost certainly had ties to the KGB, Putin’s former employer. In his time Yakunin has put in stints at the Soviet Committee for Foreign Trade Relations and with the Soviet mission at the UN. Foreign intelligence ties? Of course. Like many top Russian politicians, some of his career and post is occluded. His original education – he was bought up in Estonia in the coastal town of Parnu – was fairly ordinary with the family relocating to St Petersberg when he was 14 (his father was a pilot with the USSR border troops, a wing of the KGB). He later studied ballistic missile production for more than five years at the Leningrad Mechanical Institute. He’s patently bright and has certainly proved himself able and willing to move with the times. After the Soviet Union collapsed he moved into banking and business before being appointed as deputy transport minister in 2000. Many ex-KGB personnel were able to take advantage of new industry licences and Yakunin, along with some physicist friends, were no exception. In time they established Bank Russia, which later financed Putin’s re-election campaign in 2004.

Huge power base for the taking
Yet it would be a mistake to label this discreetly influential man as just another power-hungry party apparatchik or ex-KGB “siloviki”, the unflattering term given to describe the network of ex and current state-security officers. He has a fascination with Russia’s religious legacy and has helped launch a foundation that encourages reconciliation of the Russian Orthodox Church. “There is nothing wrong with trying to strengthen the spiritual core of our society, and I will never say there is,” he says. He’s helped launched the World Public Forum – Dialogue of Civilizations, an International NGO, based in Vienna, Austria to help link people of different civilizations, traditions and religions.

Yakunin has also proved an astute diplomat. The West’s relationship with Russia has undergone spasmodic freezes in recent years following the invasion of Georgia and the on-going difficulties in Chechnya. Yet in the background, Yakunin was there, helping oil the wheels of communication and dialogue. Many predicted the start of another cold war at the time. Yakunin dismissed the accusation out of hand: “How can anyone talk about some kind of Cold War when banks…are going bankrupt, and tomorrow, God forbid, the people who did not receive their paychecks – not in Russia – take to the streets? A Cold War is out of the question. An attempt to create a precedent for a new Cold War, should anyone try to do this, would be the stupidest thing one could imagine.” Reassuring words.

Cynics say the active courting of the church and his close transport links give him a ready power base he could conceivably count on should he choose to make a move for the top job.

They’re almost certainly right, and they’re a formidable asset to call upon. Others point to his links to the former Soviet Union, muttering that he’s too Soviet Old School for genuine reform. Well, that cloaked, kleptocratic world is part of him as well as the fascination with the West, plus the willingness to not just talk but listen. Educated and with the gift of being able to talk straight to his massed ranks of railway staff, Yakunin will increasingly loom larger on the Russian political stage. While its true that he’s not well known in the West, he’s still well known by the people at the top that matter. That’s enough for him for the time being, and also enough for Kremlin watchers, who take him very seriously indeed.