In a time when the American art world was largely concerned with abstraction, Pennsylvania-born Alice Neel was painting portraits 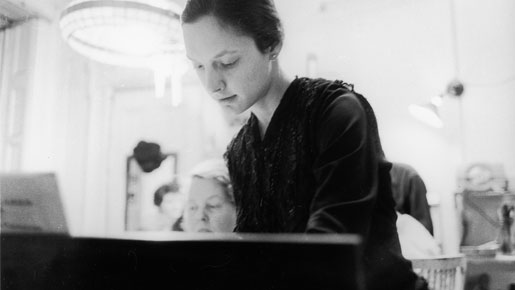 Her vivid, emotionally engaged paintings of friends, lovers and fellow artists only began to garner the popular and critical acclaim Neel deserved in the 1970s, five decades after she first began exhibiting. Until then, despite the beauty and insight of her paintings, Neel remained an outsider, to all intents and purposes invisible to an establishment that shunned both the figurative and the female.

Now, however, she is acknowledged as one of the great American painters of the last century, as well as a model for the feminist movement. Solo exhibitions of her work have been held at prestigious galleries throughout the United States, and in 1976, Neel was inducted into the National Institute of Arts and Letters (the precursor to the American Academy and Institute of Arts and Letters and the highest formal recognition of artistic merit in that country).
Neel is less well known in Europe, having only been exhibited here a handful of times; thatís all set to change, however, with the opening of Alice Neel: Painted Truths at the Moderna Museet in Malmo this month. This retrospective, which comprises 60 of Neelís most eerie and affecting portraits and cityscapes, is on the last leg of a tour that began at the Museum of Fine Arts, Houston, before visiting Londonís Whitechapel Gallery. The show has garnered sparkling reviews in both its previous incarnations.

The paintings from the beginning of Neel’s career are dark and occasionally disturbing. The 1920s and ë30s were blighted by great heartache for the artist, the death of her first daughter to diphtheria, and separation from the second leading Neel to attempt suicide several times. Futility of Effort (1930), one of the few non-portrait works in this show, features an almost cartoonish image of a child’s figure with its head between bars. The painting is pared down in both palette and form and it takes no leap of faith to believe what the curators suggest, that this work takes its inspiration from the true story of a little girl who strangled herself between the bedposts as her mother worked in another room. The sadness and guilt contained within this simple image is palpable.

Happier times followed for Neel, with the births of her sons, Richard and Hartley, in 1939 and 1941 respectively, although her circumstances remained strained for many years to come, as she raised the boys as a single mother on meagre earnings from painting and teaching. It is the more mature portraits of Neel’s later years that are really the focus of Painted Truths, but the exhibition does feature some paintings from early in her career, including the hopelessly constricted Fire Escape (1946), which shows the view from her apartment in Spanish Harlem. A matrix of criss-crossing bars, with no sky or greenery to provide relief, the painting evokes imprisonment and oppression.

Neel may have felt isolated from an artistic community uninterested in portraiture and dominated by men, but the paintings she produced from the 1950s onwards show no sign that she was cowed by her situation. Neel’s painterly gaze sees straight to the heart of her subjects to create portraits that are disarmingly true. In The De Vegh Twins (1975), the reassuring arm one sister puts around the other’s shoulders is a subtle and effective counterbalance to the nervousness in the pair’s deep black eyes. The pregnant woman in the painting of that name from 1971 lies alone and exposed upon a couch. The fact that the man behind her is not referred to in the painting’s title or acknowledged by the mother-to-be is a demonstration of the figure’s self-sufficiency, as well as a feminist statement by Neel herself.

Her subjects often appear to be floating in their canvasses, free from background and context. The effect is rough and ready, but just serves to focus the attention even further on the astonishing figures she portrays. Magnus Jensner, director of Moderna Museet, points to Neel’s practice to explain this aspect of her work: She was interested in catching that person’s personality or psyche. And when that was finished, the painting was finished. There was no need to do anything more.

For those unfamiliar with Neel’s work, Painted Truths offers a remarkable introduction. It is not just that many of the paintings exhibited have the power to halt the viewer in her tracks with their knowingness and sensitivity; it is also that, as a collection, this show opens a window onto the life of a woman who encountered enormous trials, yet emerged resplendent.

Alice Neel: Painted Truths is at the Moderna Museet, Malmo, Sweden, from October 9 to January 2. www.modernamuseet.se

Basquiat
Until his untimely death at the age of 27, Jean-Michel Basquiat was one of the brightest stars of the American art scene. His vibrant, street art-inspired paintings – more than 120 of which are exhibited here – reference a wide range of topics including Haitian voodoo ritual, 20th-century race relations, slavery and pop culture. Fabrice Hergott, the dirctor of Musée d’Art moderne de la Ville de Paris, credits this hugely influential artist with “contributing to the opening up of American culture”.

Rodney Graham. Through the Forest
A less well known North American figure enjoying a large retrospective is Canadian artist and musician, Rodney Graham. Graham uses all sorts of media, from painting and photography to books, machines and music, to challenge key concepts in art history. His work, which is largely conceptual in nature, asks questions about the way we approach the ‘father figures’ of art, literature, philosophy and pop culture, and offers an irreverent take on some of 20th-century culture’s most fundamental ideas.