State of the arts: establishing a framework for ethical funding 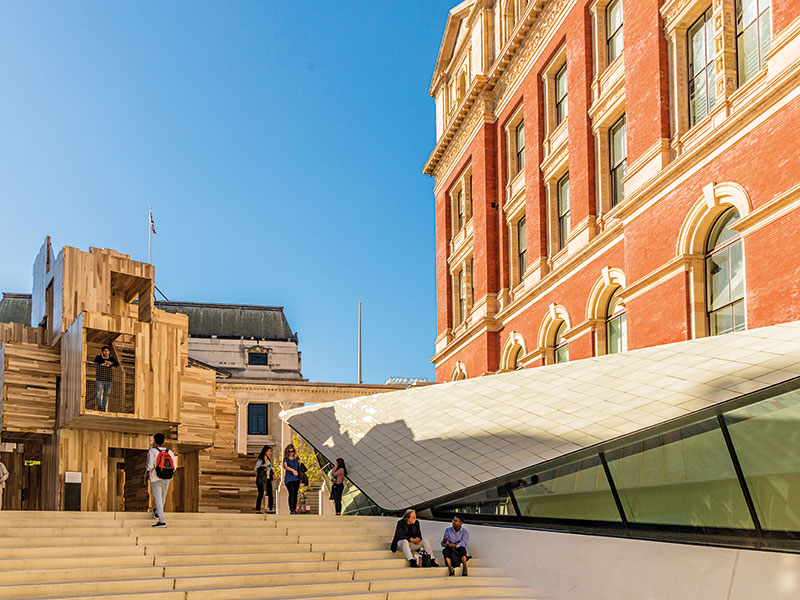 The Sackler Courtyard at the Victoria and Albert Museum. The Sackler family has provided funding to countless arts organisations
Lifestyle

In the 18 years from 1999 to 2017, nearly 400,000 people in the US died from opioid overdoses, according to the Centres for Disease Control and Prevention. By 2017, the crisis of opioid abuse was so dire that a public emergency was declared. Opioids are highly addictive painkillers, but from the 1990s they were commonly prescribed by doctors in the US. The number of opioid prescriptions handed out peaked in 2012 at 282 million; more than doubling over the course of a decade.

One drug implicated in the crisis is OxyContin, made by Purdue Pharma. Purdue has faced thousands of lawsuits over how it marketed its blockbuster drug, but now the scandal is beginning to envelope the Sacklers – the wealthy family behind the company.

The unwanted spotlight has called into question the family’s philanthropy via the Sackler Trust, and has raised fresh concerns about what constitutes an ethical donation. “Should we align with the ‘ethics of society’ or set our own code?” asked Michelle Wright, Founder and CEO of Cause4, a social enterprise that helps charities raise funds. “And when organisations have values that don’t always align with their employees or audiences – whose view should lead?”

Trust busting
The Sackler family, which was worth $13bn (€11.6bn) in 2016, according to Forbes magazine, has provided funding to countless arts organisations, including the UK’s National Portrait Gallery, the Solomon R Guggenheim Museum in New York and Stiftung Les Arts Gstaad in Switzerland. Since 2010, it has donated £60m (€68.6m) in the UK alone, according to the UK’s Charity Commission.

With any donation seemingly capable of sparking a reckoning with the public, tensions are running high between artists, employees and trustees

The Sackler Trust’s relationship with Purdue Pharma has been highlighted in recent months, however, with photographer Nan Goldin, the founder of Prescription Addiction Intervention Now, leading protests against arts institutions that continue to accept funding from the family. Goldin wrote in Artforum magazine in 2017 that she became “addicted overnight” to OxyContin after being prescribed the drug after surgery. In February 2019, she told The Observer that she would refuse to allow London’s National Portrait Gallery to show a retrospective of her work if it accepted a £1m (€1.14m) donation from the Sackler Trust.

Around the same time, court filings showed that Sackler family members had been closely involved with the marketing of OxyContin. Elsewhere, the Sacklers came under fire from New York’s attorney general, who alleged that members of the family fraudulently transferred money from Purdue into offshore accounts that they owned.

Although the family has denied these allegations, in March, the National Portrait Gallery and the Sackler Trust released a joint statement explaining they had agreed “not to proceed” with the donation, which was earmarked for the gallery’s Inspiring People project. A spokesperson for the trust said in a statement that the Sacklers did not want to become a “distraction” for the gallery.

Over the next few days, several galleries declared they would no longer accept donations from the Sackler family, including the Tate galleries in the UK, Berlin’s Jewish Museum and the Guggenheim. At the end of March, the trust said it would halt all philanthropic activity in the UK.

Reputation management
Controversy regarding ‘tainted money’ in philanthropy is nothing new, according to Gene Tempel, an expert in philanthropic studies. Tempel, a professor at Indiana University and the founding dean emeritus of the university’s Lilly Family School of Philanthropy, told European CEO that recent years have seen a growing demand for transparency and accountability, which has been amplified by social media and the 24-hour news cycle.

When defence firm BAE Systems was announced as the sponsor of the UK’s Great Exhibition of the North, for instance, several of the acts involved with the event took to social media to protest due to the firm’s involvement in selling arms to Saudi Arabia. BAE quickly announced that it would “redirect” the funds elsewhere.

Dear friends, please help us in putting pressure on @getnorth2018 to #dropBAE as a sponsor. We want to celebrate all the beauty of the North without @BAESystemsplc blood money RT ✌🏾❤️ https://t.co/1Q3LuJXmye

Oil companies such as Royal Dutch Shell and BP have long been in the firing line of activists who object to their support of the arts. BP’s relationship with the British Museum, the National Portrait Gallery and the Royal Opera House stretches back two decades, despite consistent protestations. Shell has also faced sustained demonstrations in protest of more than a decade of sponsoring London’s National Gallery – an arrangement that quietly ended in January 2018. In August, the oil giant also concluded multiyear collaborations with two major Dutch museums: the Van Gogh Museum and the Mauritshuis. While the firm said the decisions were mutual, protestors claimed victory.

With any donation seemingly capable of sparking a reckoning with the public, tensions are running high between artists, employees and trustees over what is appropriate when soliciting funding. Wright noted: “In my view, if we’re not careful and if we don’t bring some of these issues out into a forum for public debate, then we may be in danger of making the arts unfundable.”

The arts industry is already struggling to attract donors. According to a 2017 Charities Aid Foundation report, cited by Wright, just two percent of all charity donations go to the arts. “If we make life more difficult for ourselves, that tiny proportion is likely to drop further,” Wright warned. Arts institutions rely heavily on philanthropy, and cutting funds could leave them financially unstable and endanger services for the public good, such as free entry.

Facing the music
Because of the financial pressure the arts industry is under, workers are increasingly worried they will be forced to accept donations from unethical sources, according to a 2018 survey by arts website Arts Professional. Accepting tainted money comes with consequences, including alienating potential patrons. “Philanthropy works on a foundation of trust, and everything you do has to be done in such a way that it builds trust with the public,” Tempel said. But however necessary, the fluid and open-ended nature of ethics makes it inherently difficult to create hard and fast rules around donations.

Creating an ethics committee or establishing a framework for considering ethical issues is a vital step in withstanding what Tempel calls the “assault on an organisation’s integrity” that comes with accepting funding from a questionable source. There is no definitive guide on where organisations should draw the line on donations, so the decisions made by these committees will vary from one organisation to the next. “It’s like a Rorschach test,” Tempel said. Some groups may decide it is better to put tainted money to good use, while others may refuse to be associated with the dirty money at all.

But in Wright’s view, having clear policies on when to accept money and why is more important than whatever decision is eventually made. “The real crux of the debate for me isn’t the decision that individual organisations make about what funding associations are right for them,” Wright said. “It’s about whether the organisation has invested enough time to consider their position.” In Arts Professional’s survey, just over a quarter of respondents said their organisation had a policy in place to help make ethical decisions.

Society’s view on what is ethically acceptable is always changing, and institutions must be able to adapt while balancing funding challenges with reputational risks. There is no such thing as ethically ‘pure’ money, and there are no predefined rules on where to draw the line. Art galleries and museums that rely on philanthropy to keep their doors open must be able to make decisions they can believe in, or they risk becoming tainted themselves.