Another strike against gender inequality in Switzerland

Despite being one of the wealthiest countries in the world, Switzerland must do more to improve gender equality. Recent protests demonstrate just how little progress has been made in recent years 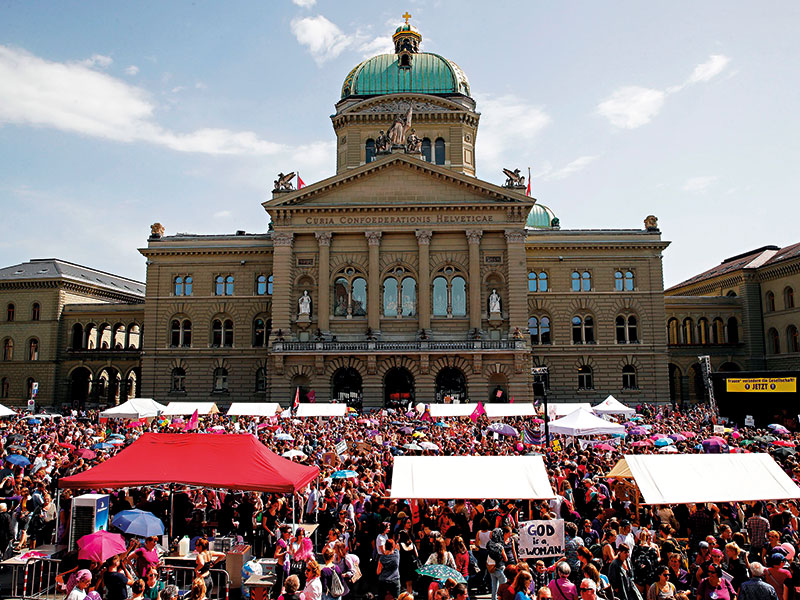 Back in June, thousands of Swiss women took to the streets in protest of the state of gender equality in the country. The Frauenstreik, as the protest was named, saw women occupy public spaces, take part in pram marches and attend city-centre rallies to campaign against unequal pay and a general culture of sexism in the country. It’s a battle that has deep roots.

Despite Switzerland being one of the world’s top economies – in terms of GDP per capita, it ranks third – the country has a poor record when it comes to gender equality. Women have only been allowed to vote since 1971, and it wasn’t until 1985 that they could work or open a bank account without receiving permission from their husbands. Although things may have moved on since then, further improvements are desperately needed.

Slow progress
Among a number of injustices still being grappled with by Swiss women, the gender pay gap ranks high. Looking at full-time executives and senior managers, the median salary was more than 23 percent higher for men than it was for women. Within technical, engineering and related professions the difference was 17.8 percent, and for full-time employees the difference was 16 percent.

“In the areas of health and education, Switzerland is almost at parity regarding gender equality, however, in areas of the economy there are opportunities for improvement,” said Sue Johnson, Diversity and Inclusion Officer at PwC Switzerland. “In a recent PwC study, tracking a decade of change across every listed organisation (900,000) in Switzerland, women in leadership roles declined from a third to a quarter, and the leadership gender balance is lower in newly formed companies than established organisations.”

A hugely diverse nation, Switzerland boasts four official languages and is made up of 26 different cantons, each with a high degree of autonomy. Some cantons have installed a Federal Office for Gender Equality, while some have not. Looking regionally, the largest wage gap between men and women is found in Eastern Switzerland (11.5 percent), while the smallest divide is in the Zurich region (7.6 percent).

In the World Economic Forum’s Global Gender Gap Report 2018, Switzerland fell from the eighth-best country in terms of gender equality in 2015 to 20th. While this is a disappointing trend, it doesn’t mean that life for Swiss women has deteriorated – just that progress is occurring faster in other nations.

“I wouldn’t say that gender equality has necessarily gotten worse in the last decade,” Gudrun Sander, a professor of business administration with a special emphasis on diversity management from the University of St Gallen, told European CEO.

“Rather, our neighbours have lapped us. For example, we don’t have quotas for boards or bodies of government. We also don’t have paternity leave, which puts women at a disadvantage when it comes to career advancements following early parenthood. Remember that due to our unique form of direct democracy, Switzerland tends to move slower than comparable countries. It will take a while until, for example, the tax system is changed to individual taxation instead of joint taxes for couples.”

Switzerland held its first national women’s strike in 1991, an event that brought together 500,000 citizens. Unfortunately, very little has changed since then. Although the political climate does perhaps present unique challenges, that should not serve as an excuse. A country of Switzerland’s standing should be performing better in terms of gender equality.

Sticking together
Despite protests in June, over the years there has been some improvement in terms of gender equality in Switzerland. Representation is moving in the right direction: female board members increased by two percent between 2008 and 2018 and, at the executive level, by 5.3 percent over the same period.

“The latest political development in terms of gender equality concerns an amendment of the [Equality Act] that was accepted by the Federal Council in late 2018,” explained Johannes Smits, Director of PwC Switzerland. “The amendment stipulates that companies with 100 employees or more will be subject to a mandatory gender pay gap review – to be performed by an external auditor. It is important to note that Switzerland clearly defines the gender pay gap as ‘equal pay for equal work or work of equal value’. The new law will come into effect [in] mid-2020.” Reactions to the protests also suggest that there is wide support for improved gender equality in the country. Although the response has not been universally positive, some employers have supported their workers in their efforts to change the country’s culture; opinion polls showed that 63 percent of the population supported the protests. National newspaper Le Temps even left pages blank where articles by female journalists would usually appear in solidarity with the movement.

Minor gains must not detract from the lack of progress elsewhere, however. While women were granted mandatory paid maternity leave in 2005, working fathers are still only entitled to one day off following the birth of their child. This reinforces traditional gender roles with men acting as the breadwinners and women forced to take on the lion’s share of childcare. Significant changes, both politically and culturally, are therefore still required.

Smashing the glass ceiling
If the Swiss Government is struggling to improve gender equality, then perhaps private companies could do more to help. Not only would this circumvent any political hurdles standing in the way of equality, but it would also focus on industries where the need for change is most pressing: while the gender pay gap is 12.3 percent in the public sector, it is 15.1 percent among private firms.

“The first important topic to address is senior leadership ownership of the gender equality issue,” Smits said. “Those companies that are successful in reducing gender [inequality] have taken the topic seriously by starting at the top. Like any other topic that is of strategic importance to an organisation, the best way for senior leadership to demonstrate ownership is to give the mandate for conducting a thorough analysis of the existing situation. Once the current situation has been described, the company should define realistic but challenging goals, define the actions that will lead to obtaining these goals and make the resources (people and money) available to actually move the needle.”

If companies do not have the resources internally to assess their treatment of male and female members of staff, they could apply for an external analysis from the EQUAL-SALARY Foundation – a non-profit organisation that provides scientific tools to enable companies to verify their gender balance. If businesses would prefer to handle matters in-house, it is vital they collect enough data to gain clear insights.

“Assessing, say, whether there is a systematic bias in recruitment, promotion or performance evaluation reveals where improvements are necessary,” Sander told European CEO. “There are also promising developments when it comes to anonymising application processes, which can take prejudices and biases out of the equation. Secondly, what gets measured gets done. Diversity goals for each department, business unit and supervisor that are evaluated regularly are key to track progress. The transparency then will lead to an internal benchmark that will help the whole company to improve gender equality.”

Aside from the ethical implications of delivering a more equal workforce, it also makes good business sense: diverse teams bring different ideas and thought processes to the table, and more gender-balanced leadership teams have been shown to deliver higher levels of performance. For Swiss companies, improving gender equality isn’t just the right thing to do; it’s in everyone’s best interests.