At 21 percent, Germany’s gender pay gap is one of the widest in Europe. Weak policy is partly to blame, but German companies could also do more to improve women’s pay progression 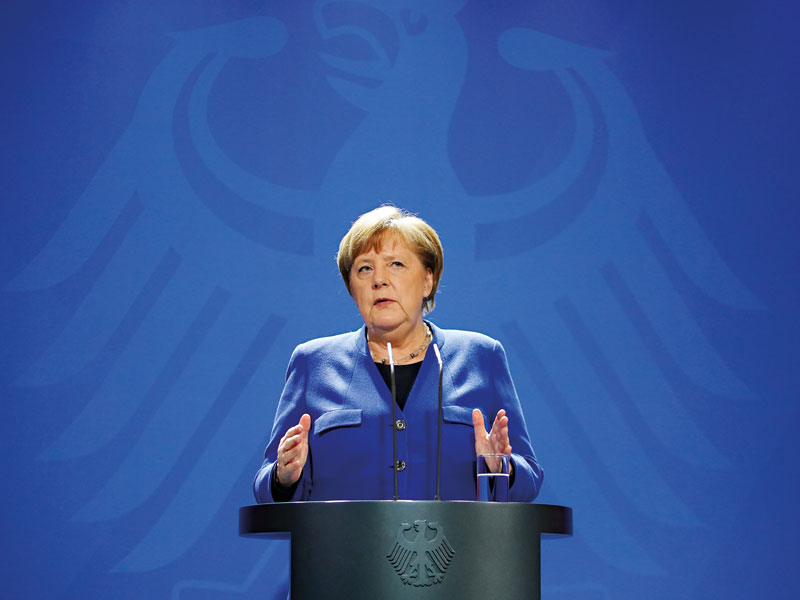 German Chancellor Angela Merkel has taken a progressive stance on many issues, yet the country’s gender pay gap still lags behind many EU nations
Featured

With generous maternity leave, welfare benefits and one of the longest-standing female heads of state, Germany has a relatively good reputation for gender equality. This makes it all the more surprising that its gender pay gap is one of the widest in the eurozone. In Italy, for example, women earn five percent less than men; in Germany, the deficit is 21 percent.

Despite its reputation as a progressive country, Germany is lagging in many ways when it comes to gender equality. A 2015 report from the European Parliament, for instance, classed Germany’s performance in achieving gender equality as “mediocre” in comparison with other EU member states.

Analysts are quick to point out that Germany’s gender pay gap is not adjusted for factors such as sector, skills and age, and when it is, the gap tumbles to six or seven percent. However, academics argue that ignoring the unadjusted pay gap only encourages us to overlook the deeper gender inequality in Germany.

Women’s work
A high unadjusted gender pay gap suggests that there are significant differences between men and women in Germany in terms of the sectors they work in and the ranks they reach within organisations. Henrike von Platen, CEO and Founder of the Fair Pay Innovation Lab, pointed out to European CEO: “There are more men on boards of the DAX 30 called Thomas and Michael than [there are] women.”

But the low representation of women in management roles and highly paid fields can be observed in all European countries. The question is why Germany’s gender pay gap is quite so high in contrast to other nations. As Aline Zucco, a PhD student at the German Institute for Economic Research, explains, we should take international comparisons of the gender pay gap with a pinch of salt: though Italy’s gender pay gap is much smaller than Germany’s, it also has a lower proportion of women in employment. She argues that lower levels of female employment can reduce the gender pay gap. “In a country with a low level of female employment, the group of women who work might be more labour-market-attached or ambitious in relation to the total female population,” she told European CEO. Zucco points out that it makes sense to compare Germany’s gender pay gap to countries with similar employment rates, such as the Netherlands and Norway. These countries still have lower pay gaps, however, at 15 and 14 percent respectively. “A potential explanation is that countries such as the Netherlands and Norway ensure a better reconciliation of family and working life by higher levels of publicly funded childcare provision and more flexible working hours,” Zucco said.

The economic cost of motherhood seems to be one of the main factors underpinning Germany’s gender pay gap. “Mothers stay at home for a relatively long time after childbirth, resulting in shorter periods of gainful employment compared to men,” said Friederike Maier, Vice Director of the Harriet Taylor Mill Institute for Economics and Gender Studies. “After returning to the labour market, a lot of women find employment in part-time jobs. These jobs are concentrated in certain low-paying sectors of the German economy, especially in retail trade, healthcare, hotels, restaurants, elderly care and so on.” In 2017, only nine percent of men in Germany worked part-time, compared with 47 percent of women.

Acting slowly
Given the overrepresentation of women in low-paying sectors, some analysts suggested that raising Germany’s minimum wage could help reduce the gender pay gap. This was one of the reasons why, in January 2015, Germany introduced a statutory minimum wage that increased the pay of those eligible by about 6.7 percent. However, a 2018 study concluded that the new minimum wage had almost no impact on the gender pay gap the following year. “The minimum wage is not high enough to close the gap,” said Maier.

Germany took stronger action in 2017 when, after much political debate, the government passed the Wage Transparency Act. As a result, individuals at companies with 200 or more employees can now find out the firm’s median remuneration based on at least six colleagues of the opposite sex in the same or a comparable role.

While this represents an important step towards improving wage transparency, the law’s impact has so far been underwhelming. Maier explained that it “is hardly known nor used… When it was introduced, economists and lawyers predicted its failure because it was so limited”.

The main problem that economists picked up on, von Platen explained, was the fact that it places the burden on employees to assess whether or not they are paid fairly: “Other countries, such as France, the UK or Iceland, have laid their focus on remuneration systems. Iceland even forces companies to prove that they have a fair remuneration system. In Germany, individuals have to step up for themselves and if discrepancies arise, there are no direct legal consequences to level these differences out.”

The six-person rule is also problematic: the more senior a person is, the less likely they are to have a comparable peer group of six more. This means women in more senior positions may be left with no information on what other managers are paid compared to them.

As well as improving transparency around wages, Maier believes that Germany must do more to improve its childcare support if it’s to keep women in full-time, high-paid roles for longer. “Germany has now reached the EU’s Barcelona target to provide childcare facilities for at least 35 percent of children under three. However, we still lack full-time facilities for all age groups, including schoolchildren,” Maier said.

Lacking motivation
As far as government policy is concerned, the issue of gender equality has too often taken a backseat in Germany. In 2018, the German Institute for Economic Research found that there’s been virtually no progress towards meeting its target to get a 30 percent minimum quota of women on the boards of large companies. Compared to Italy and Cyprus, which are among the most-improved countries in terms of gender equality, Germany appears to lack the initiative to push policies forward.

Given the government’s hesitance, it’s clear that German businesses can do more. Zucco references a prominent study by Claudia Goldin, which found that the gender pay gap is extremely high in occupations that prioritise long working hours, and relatively low in occupations like pharmacy, where employees can more easily take on others’ responsibilities. “This result shows that increasing the level of standardisation and documentation can reduce the gender pay gap because the absence of a certain employee to a certain hour does not lead to additional costs to the employer and therefore to lower wages,” said Zucco.

But perhaps the simplest and most effective way to decrease the gender pay gap is to improve wage transparency. This is something businesses can take into their own hands. “Companies can analyse their remuneration system to identify gaps in pay and bonuses, in recruitment, in promotions or leadership positions,” said von Platen. “This does not require any legal obligation, but a clear stance in leadership. Fair pay is a question of corporate culture. And fair leaders do better business.”