Up-and-coming young artists are increasingly finding inspiration in the German capital, which is starting to rival New York’s dominance of the art scene 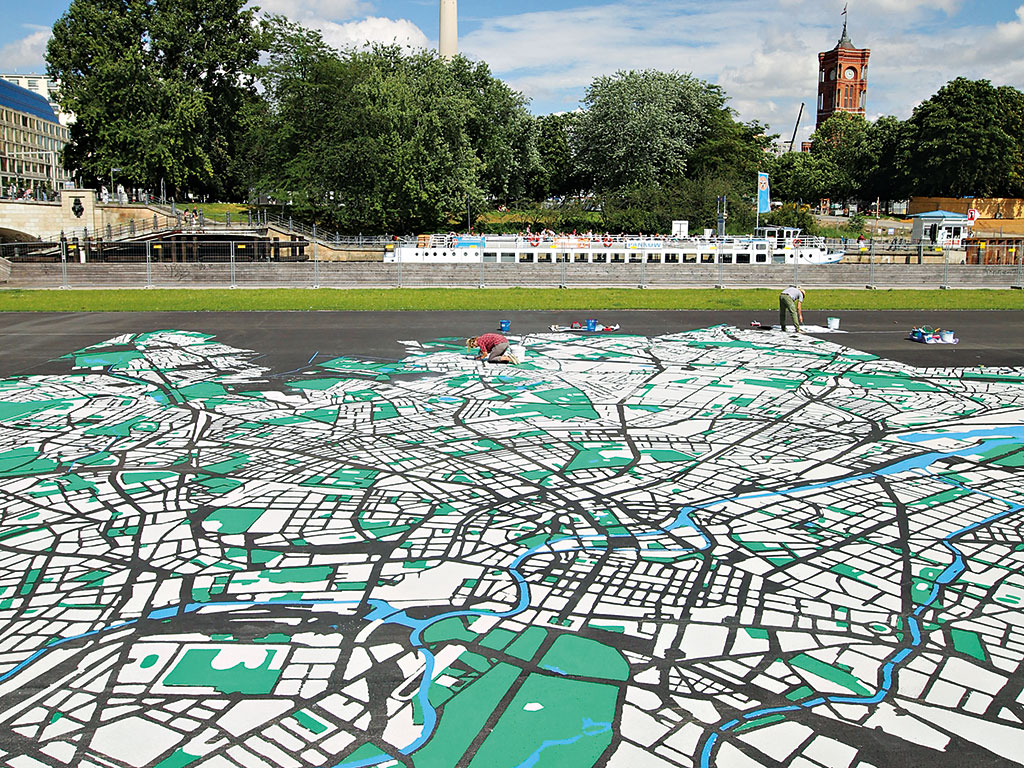 European cities are beginning to attract artists back to their studios, offering inspiration and the ideal conditions for creativity to flourish
Management

Europe has long been able to look down its nose at the rest of the world when it comes to art. With its rich artistic history dominating centuries of culture, the continent has been home to some of history’s most creative minds.

However, over the last few decades, the US has emerged as the place to be for contemporary artists looking for both inspiration and acclaim. In particular, New York has become a beacon for contemporary artists, both from the US and the wider world. What’s more, New York spawned some of the last century’s most original artists, with Andy Warhol, Jackson Pollock and Mark Rothko all finding fame in the city. It is also home to some of the greatest collections of art in the world, with the Guggenheim, the Museum of Modern Art, and the Metropolitan Museum of Art housing works by noted European artists, including Paul Cézanne, Paul Gaugin, Henri Matisse and Vincent van Gogh.

Now though, despite the enduring pull of the US, European cities are beginning to attract artists back to their studios, offering inspiration and the ideal conditions for creativity to flourish. While a few years ago, the disused warehouses of London’s East End attracted many struggling artists, rapid gentrification and soaring demand for property has caused creatives to look elsewhere.

Berlin has come from nothing; a bombed-out, divided city. In the last 25 years, it has staged
a comeback

The new frontier
Now, it is cities in mainland Europe that are seeing burgeoning art scenes spring up. Berlin in particular has become Europe’s most attractive destination for up-and-coming young artists. Since the fall of the Berlin Wall, Germany’s reunified capital has steadily grown to be one of Europe’s most desirable places to live. The relatively cheap property prices and hugely varied cultural history has caused young creative types from across the world to flock to the city.

The city’s authorities have done a lot to encourage this newfound status as a cultural hub. VisitBerlin, the city’s tourism body, has actively promoted its gallery and studio spaces, hailing it as the ‘epicentre of contemporary art’. Thanks to these efforts, it is little surprise that Berlin – and the eastern part of the city in particular – has become such a beacon of creativity.

VisitBerlin’s CEO, Burkhard Kieker, told USA Today in 2014 how the city has been transformed since the fall of the Berlin Wall. “Berlin has come from nothing; a bombed-out, divided city. In the last 25 years, [it] has staged a comeback.” Such has been the extent of the city’s emergence that many of the art world’s leading figures are moving to take up jobs there. Neil MacGregor, director of the British Museum, recently announced that he would be moving to Berlin to take up a post at the Humbold Forum in 2016. The Forum is a €600m project that will see the city’s Stadtschloss – a former Prussian imperial palace – rebuilt as a world class museum and cultural centre.

MacGregor told the BBC in May that such efforts reflected how the city wanted to be seen in the future. “Berlin has always used its buildings to articulate what it wants to be. What is so remarkable about the remaking of museums and cultural institutions in Berlin is that they are…conceived as a way of shaping what the city becomes.”

Berlin now boasts more than 440 galleries and around 20,000 artists from around the world. According to VisitBerlin, these artists include noted names like Thomas Demand, Wolfgang Tillmanns, Omer Fast, Alicja Kwade and Daniel Richter.

Insider knowledge
One artist that has a great perspective on the benefits of both the US and European artistic divide is Stefan Behlau. The half-German, half-American artist was born in Zurich and raised on a farm in Germany, but has travelled across the world throughout his short career. A stint in London was followed by a degree in fine art at the prestigious Pratt Institute in Brooklyn, New York. Living in Brooklyn for many years, as well as in California, he has since returned to his homeland’s capital to further develop his unique artistic style. Having exhibited his work in Berlin, Los Angeles and New York, he currently has a show, BANZAI, at London’s PM/AM gallery.

Having spent time in both the US art world and across Europe, Behlau is well positioned to give an insight into the differences in scenes. He now divides his time between Berlin and Brussels, and says both cities have a lot to offer young artists, with international attitudes rather than very particular local cultures. “Both Berlin and Brussels are very international cities in sometimes not-so-international countries.”

Berlin has always been home to creative thinking, noted Behlau, and that can be seen throughout the city’s history. “I believe Berlin has always kind of been known for being, if not open, then at least perceptive to creative mindsets. All the cabaret before the war and after it was like this western UFO in the Soviet Union that attracted people like David Bowie. After the wall came down there was just all this free space and an authority vacuum.”

Indeed, the city has experienced a similar boom before. In the 1920s, after Germany’s defeat in the First World War, Berlin became the focal point of many groundbreaking artistic movements, including New Objectivity, and many notable artists, including Max Beckmann and Edvard Munch, draw great inspiration from the city. The 1970s and 80s also influenced a great many artists, with music and contemporary art coming together in much the same way as it had in New York a few years before.

Perfect setting
It is not just the history of Berlin that has drawn artists to it, but also the conditions. It’s affordable for most struggling creatives, while also a comparatively liberal and international location. “[It is] obviously a very exciting place for any artist. Affordable as well. Although many complain about gentrification and Berlin is getting more expensive to live and work in, it is still far under prices one would be paying in London, Paris or New York”, observed Behlau.

At the same time, the Belgian capital of Brussels is also emerging as a hub for aspiring young artists eager to get noticed. It also has the right conditions to inspire creativity, said Behlau, while also being perfectly located for artists wanting to explore the rest of Europe. “Brussels still seems to have a lot of nice space to work and live in. Also, here the attractive thing for artists and young galleries is the rather high standard of living. Great food, great bars and it seems to be situated smack in the centre of Europe. You are just a short train ride from London, Paris, Cologne and Amsterdam. Many young collectors and galleries are also drawn to Brussels for these reasons.”

While there still remains a hugely important traditional art scene in mainland Europe, there is a burgeoning community of young contemporary artists developing their styles and innovating in many different forms. The hugely important European Fine Art Fair, held every year in the Dutch city of Maastricht, has added more and more contemporary pieces each year, for example.

Behlau claimed that he always wanted to steer away from being categorised within a specific style, preferring rather to not be confined to any particular medium. “I have always tried to stay away from honing in on a particular style. In art school I was warned that it would not be easy to have a presence in the art market, because what I was producing appeared to be too varied. Not wanting to have a specific style or form of expression is also why I switched my major from painting to drawing. My problem with painting was that it meant being confined to a specific medium. Drawing could mean anything from charcoal renditions on paper, to 3D modelling, video, photography and sound. The term drawing also has a connotation of something not quite complete. Something one can still build upon. Something in flux, malleable and open. Painting, on the other hand, appeared to have rules and was always defending itself within it’s own seemingly immobile historical context. Especially in New York, it seemed.”

For any emerging artist, inspiration can be found in many different areas. Behlau noted that the first battle is to see whether there is a purpose to what one is doing: “Artistic drive aside, the difficult question you ask yourself is why am I doing whatever I am doing? Is there a purpose? Why am I making these marks and why am I making them the way I am making them?”

He has drawn inspiration from a number of different places. There is the obvious modernist movement, but also abstract expressionism that emerged after the Second World War. He is also influenced by both American and German styles. “I guess everything before is an influence. To pinpoint current inspiration – I am not quite sure. At first glance, my current spread paintings are definitely related to colour-field painting post-World War II. More closely related to American painting than to German Malerei. But my interest lies not in the modernist search for a higher meaning or as spiritual testament to the flat surface. Again: I am much more interested in the idea of art-making mechanisms.”

He added: “In making art, there is always the possibility of subjective renderings of an outside world (projection), sometimes by means of expressing what is on the inside. Then there is this aspect of analytical naval gazing – art that almost solely takes into account its own existence and/or relevance.”

Colour splash
Behlau is known for his huge, colourful abstract paintings, and some of his most notable work emerged from a random trip to a local paint store while he was living in the US. “I have always loved the idea of colour as a rhythmic catalyst and carrier of meaning. Compared to the inherent pigmentation we find in nature, colouring with paint is one of the most effective tools for abstraction that we have. When living in California I would always see these great colour charts hanging in my Los Angeles paint supplier’s store (Nova Color). Each card was letterhead size and I thought these would make terrific paintings if blown up to human scale. So, I just had to figure out how to make these colour swatch cards in big.”

This led to a show in Hamburg, based around large abstract paintings. “The first resulting series was Nova Color (shown in 2014 at Niklas Schechinger Fine Arts in Hamburg), translating the sample cards’ standardised aesthetic into large-scale paintings. These works were still closely related to their original compositions and dimensions, whereas the current pictures being produced by this mechanism are a lot more free in form, rhythm and tonal qualities.”

Behlau’s new work looks at how to transform painting into a mechanical process, incorporating automation into his method. “My current series seems to be operating in this modus. I have been exploring ‘certainties’, or tools within our picture-making vocabulary, and this current work strongly resembles something of an automated printing process. The idea of art-making mechanisms has played a paramount role here. Finding a way or maybe even mimicking a form of mechanical reproduction. Finding a form of mechanical production for picture making: a semi automatic painting machine.”

While the pull of America will always be there for artists hoping to find fame and fortune, Europe’s scene is beginning to rival it for creative inspiration. Certainly, the prestige of Europe’s art galleries has always remained, but now many aspiring artists feel they don’t need to move across the Atlantic to get noticed.