At Davos, the world’s political and business leaders will gaze down from a physical and metaphorical height at a world in turmoil. From the refugee crisis to the stunning international rejection of globalisation, the World Economic Forum has a lot to untangle 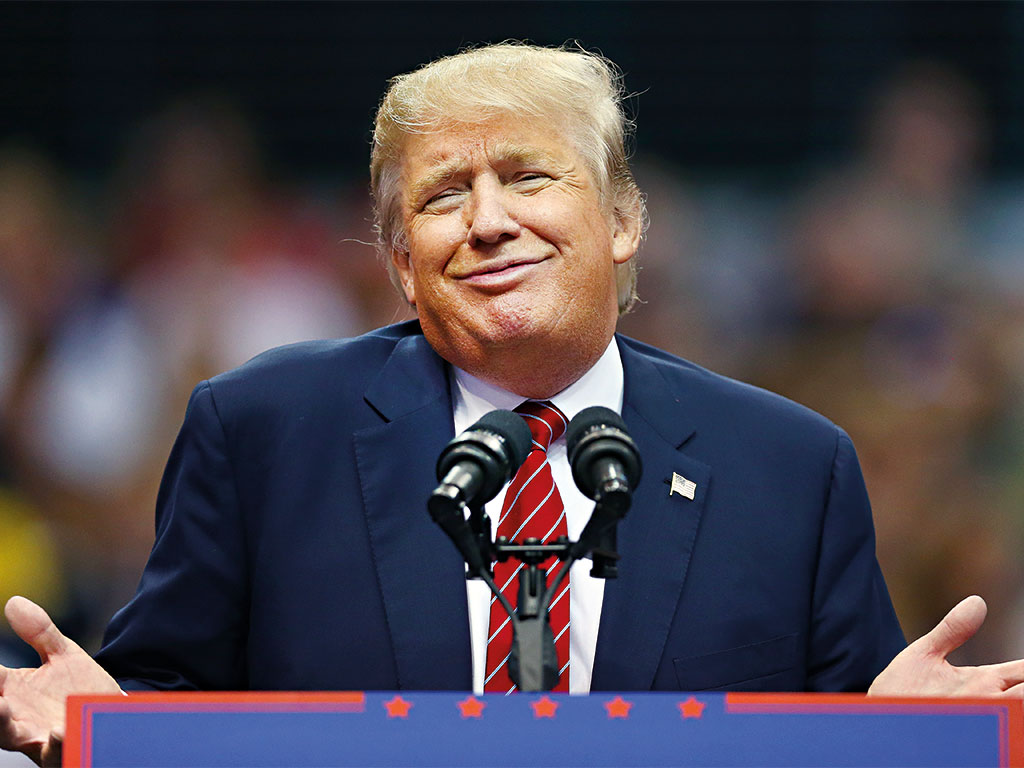 At Davos, World Economic Forum attendees will discuss what to expect from Donald Trump's US presidency, particularly in terms of his attitude to international trade and relations
Management

In January, the world’s richest and best connected will descend upon a sleepy village for the annual meeting of the World Economic Forum (WEF). Since 1971, the global elite has gathered at the small Swiss mountain resort of Davos to discuss the world’s most pressing issues. This time around over 2,500 guests are expected, with attendees paying upwards of $20,000 for the privilege. Founded by Klaus Schwab in 1971, the WEF operates under the motto “committed to improving the state of the world”. From Canadian Prime Minister Justin Trudeau and the IMF’s Christine Lagarde, to leading business minds such as Bill Gates, the wide array of speakers always makes for an impressive showing and insight.

The range of issues is broad too, with recent discussions ranging from the impact of 3D printing to global gender equality, although usually there is some sort of overarching theme to the discussions. The 2016 edition focused on the world’s ‘fourth industrial revolution’, a concept first put forward by Schwab himself. In his most recent book on the topic, Schwab argued we are once again undergoing a revolution in economic production techniques, one which will have profound consequences for our world. Whether it is mobile supercomputing, artificial intelligence and cognitive computing, self-driving cars, or neuro-technological brain enhancements, the way society and economies are organised is set for a huge shake-up. How world leaders should approach this seismic shift was the central theme for 2016.

The headline theme will be ‘responsive and responsible leadership’

This year’s meeting, it appears, will take a slightly more political turn. The headline theme will be ‘responsive and responsible leadership’. Indeed, 2017’s gathering will focus on a number of growing trends and global events that have caused great concern, particularly in terms of the future direction of the world economy. According to the overview: “The weakening of multiple systems has eroded confidence at national, regional and global levels. In the absence of innovative and credible steps towards their renewal, the likelihood increases of a downward spiral of the global economy, fuelled by protectionism, populism and nativism.” How to stem this tide will be the primary concern this year.

Brexit bother
Last year’s gathering focused partly on the then-upcoming referendum on the UK’s membership of the EU. Since then, the UK electorate has voted narrowly to leave the bloc, surprising most observers. Of immediate concern for WEF attendees will be how this decision is handled. UK Prime Minister Theresa May has said the process will begin no later than March, with the activation of Article 50 of the Lisbon Treaty. The UK will then have two years to negotiate the terms of its exit. The direction of the UK’s departure and what terms it should both seek and receive will be a hot topic for all involved.

Questions will be raised about the precise nature of the separation; specifically, whether or not the UK will remain in the single market. The answer to this question will have serious implications for firms around the world that currently use the UK as the base of their European operations. Financial institutions based in the City of London, for instance, will be keen to maintain passporting rights in order to operate in the EU. However, these may be lost should the UK go for a ‘hard Brexit’ and leave the single market altogether.

Economic implications aside, the sentiment behind the vote will also be up for discussion at the WEF meeting. For many commentators, the Brexit vote was indicative of a rising populism across the continent, which the WEF has identified as one of the key threats facing the future of the global economy. Panellists are likely to discuss populist and anti-EU groups across the continent, including Germany’s Alternative für Deutschland and France’s Front National.

For many attendees, this ideological shift will raise the spectre of a growing sentiment against globalisation, chiefly in its forms of international governance and increased mobility of labour. Speakers and panels will explore why growing numbers of people are becoming disenchanted with  globalisation, and sceptical and hostile to its outcomes and processes. The focus will be on how leaders around the world can maintain a global and open economy, while also placating the fears and concerns of their electorates.

This will involve finding solutions to some of the most pressing issues faced by Europe today. Top of the agenda in this respect will be Europe’s migration crisis. Since the last WEF gathering, millions of migrants have entered Europe, with a large number coming from war-torn countries such as Syria and Afghanistan in order to claim asylum. Europe was woefully underprepared for this mass movement, and rifts quickly emerged within countries and even within political parties as to whether to welcome or turn away those arriving. With migrants still making their way to Europe, how the continent can coordinate a coherent and unified strategy will be of vital importance.

Other perceptions of the EU are also likely to be addressed. While the southern European debt crisis has largely been out of the news, questions over the currency union’s viability and Greece’s financial health persist. Other threats to the financial health of the continent will also be on the agenda, including Italy’s weakening financial position, the effect of the ECB’s negative interest rate policy, depressed profitability for European banks, Hungary’s own referendum vote to reject EU migrant quotas, and Deutsche Bank’s increasing volatility. On an existential level, attendees will have to grapple over whether European integration should continue, and how it could continue in a way that is acceptable to the union’s citizens.

Tough trade
After years of ever-greater advances in global trade, citizens in many countries have started to assert their dissatisfaction with the direction of the trend. In the US, both presidential candidates opposed the Trans-Pacific Partnership (TPP). Donald Trump called it “a bad deal”, while Hillary Clinton – once a TPP advocate – reversed her policy to oppose it during the campaign trail. This rare point of agreement was reflective of a rising anti-trade sentiment within the US.

Now, with the victory of Donald Trump, the US commitment to free trade in general might be in doubt as America’s new president will be able to impose tariffs on other states even without the consent of Congress. The extent to which he will pull the US away from its commitment to free trade – and indeed globalisation in general – is yet to be seen. However, with his campaign for office staked on the promise of ending the US’ aforementioned “bad deals”, and the backbone of his support coming from Americans hostile to global trade, the likelihood is a sharp move away from the norm of the past few decades.

After years of ever-greater advances in global trade, citizens in many countries have started to assert their dissatisfaction with the direction of the trend

Indeed, after decades of growing trade, momentum appears to be slowing. In September, the World Trade Organisation announced it was revising its estimates for global trade growth in 2016 downwards to just 1.7 percent, from an earlier estimate of 2.8 percent. This new figure is the slowest predicted rate of trade growth since the start of the 2008 financial crisis. Trade growth, relative to GDP, has been weak since the end of the global recession. As an analysis by the Peterson Institute for International Economics noted: “Following the recession of 2008-09, global trade and FDI performance did not resume their accustomed growth rates, unlike in the aftermath of previous recessions.” Since 2008, the world has seen “the longest post-war period of relative trade stagnation”.

It will be of vital importance then for the bigwigs at Davos to discuss the future of international trade. Generally a pro-trade crowd, top on the agenda will be how  to reverse the slowdown.

Economic inequality
Related to worries over trade and growing protectionist sentiment, as well populist sentiment within in the EU and beyond, will be a topic of increasing concern among the global elite today: economic inequality. Thomas Piketty’s book Capital in the 21st Century is one of the most popular economic tomes of recent years. Think tanks and charities regularly publish reports measuring inequality around the world. Indeed, Barack Obama himself labelled economic inequality the “defining issue of our age”.

Many economic commentators see it as holding back economic growth through lowering aggregate demand, and much of the anti-trade sentiment in the US stems from growing inequality. Trade has, it is argued in some quarters, damaged the US’ middle class through offshoring and reduced wages. A hot topic at last year’s gathering, WEF attendees will once again hold counsel on how to address the growing gap between top-end wealth and average incomes.

On the surface, the focus on responding to the threats facing the world economy seems overtly political. However, embedded in these political challenges are deeper social, economic, financial and existential issues. At the heart of the WEF discussion will be how leaders can make the global economy and its integration more palatable and more inclusive for all the world’s citizens. Political trends reflect a growing malaise with the globalised economy and world at large, and the meeting at Davos will provide a forum for the sharpest minds to work out the cause of this sentiment, and how to address it.