Spain has embraced renewable energy, with wind power alone fulfilling 11.5 percent of the country's electricity demands so far this year. Spain ranks third worldwide in terms of overall installed wind-power capacity at nearly 16,000 megawatts, and they haven't stopped there 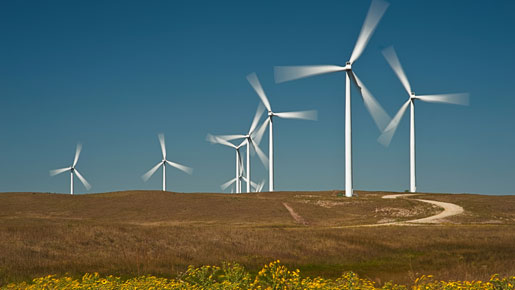 Above: A field of solar arrays are shown at sunset. The last rays of sunlight are reflected towards the tower.

The Abengo PS10 solar tower is the largest solar power-generating plant in Europe, and is the result of several years of research and development. It is the first solar power tower in the world to commercially generate electricity and deliver it reliably to the grid, and is capable of producing 11 megawatts of electricity.

The plant works by using sunlight to generate heat. To generate this intense heat, arrays of reflective mirrors are used to concentrate sunlight onto a central receiver that uses the collected heat to produce steam to power an engine to generate electricity that can be distributed through the electricity grid.

The solar field is composed of 624 heliostats. Each heliostat is 120m2, which means the entire heliostat field has an area of 75,000m2. Each heliostat tracks the sun on two axes and concentrates the radiation onto a receiver located on the upper part of the 115m tower. The receiver converts 92 percent of received sunlight into steam.

Above: The PS10 receiver is composed of four vertical panels that are each 5.5m wide and 12m tall. The panels are arranged in a semi cylindrical configuration. The receiver can deliver 55MWth of saturated steam at 257°C. The efficiency of conversion of sunlight into steam is better than 92 percent. The PS10 generates enough energy to supply 5,500 households.