Now that Cyprus, Greece and Israel have signed the Eastern Mediterranean pipeline deal, the countries may finally fulfil their ambitions of becoming regional energy hubs – but long-simmering disputes could create blockages 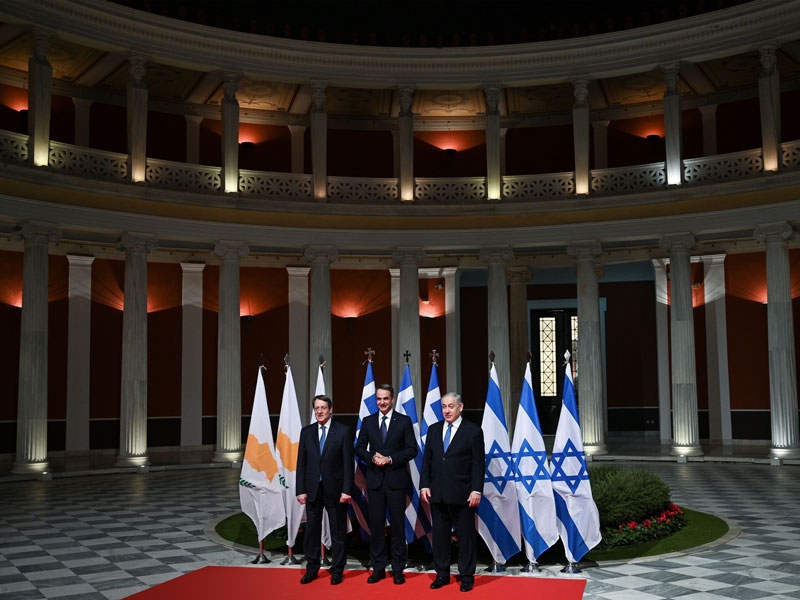 The Eastern Mediterranean is in the middle of a hydrocarbon boom. Within a decade, billions of euros worth of natural gas has been discovered in its waters – from the Leviathan gas field off Israel’s shores, to the Glaucus-1 well off the coast of Cyprus, which is estimated to hold between five and eight trillion cubic feet of gas. As a result, the region now looks increasingly viable as an alternative energy source for Europe.

In early January, Greece, Cyprus and Israel took significant political steps to make this a reality when they signed the Eastern Mediterranean pipeline deal. The $6bn (€5.48bn) to $7bn (€6.39bn) pipeline will export approximately 10 billion cubic metres of gas per year into mainland Europe, travelling from Israeli and Cypriot waters via the Greek island of Crete. Current projections suggest the pipeline will be completed by 2025, by which point it should fulfil about 10 percent of Europe’s projected energy needs.

However, several obstacles stand in the way of the project’s completion. As the region’s untapped energy potential has been revealed, age-old geopolitical disputes are rising to the surface. The mounting political risks mean unlocking these gas stocks will be far from straightforward.

Developing gas infrastructure requires multibillion-euro investments, the returns of which take years or even decades to materialise

As one of the smallest economies in the eurozone, Cyprus has never been a huge player in the continent’s energy scene. However, after its economy was crippled in the European debt crisis – prompting it to accept a €10bn bailout from the European troika in 2013 – the island has been intent on bolstering its economy by developing its energy sector. Since its first natural gas discovery in 2011, Cyprus has continued to strike gold; in 2019, ExxonMobil made the world’s third-largest natural gas discovery in two years off the island’s coast.

Similarly, Israel is on the cusp of becoming a major gas exporter in the region, having long been dependent on Russia for its energy needs. These discoveries don’t just mean greater self-sufficiency − they could also open the door to lucrative export deals with Jordan and Egypt. In addition, the pipeline deal could help forge stronger diplomatic ties between Israel and the EU.

Meanwhile, Greece stands to benefit as an intermediary thanks to its enviable geographical position. Its connection to mainland Europe grants it easy access to the massive EU market, which it is looking to capitalise on. Its €4.5bn Trans Adriatic Pipeline should bring gas from Azerbaijan through Greece to Albania and Italy.

Finally, amid rising demand for energy, the project would be a boon to Europe, which is determined to reduce its reliance on natural gas from Russia. In 2018, 11 member states imported more than 75 percent of their natural gas from the country, according to the European Commission. Mammadov argues that the pipeline should also improve the infrastructure and connectedness of Europe’s southern states. “[The] presence of another pipeline source will mean a guarantee of supplies, which, in turn, will only encourage the construction of new interconnectors,” he said. Hot under the collar
The waters of the Eastern Mediterranean are hotly disputed. Ever since Turkey invaded Cyprus in 1974, it has occupied the north of the island. As such, it claims to be entitled to some of the hydrocarbon reserves in Cypriot waters. Turkey made four attempts to drill near the island in the second half of 2019 alone, so when the pipeline deal was announced, Turkey was quick to condemn it as an effort to undermine its sovereign rights.

“Any project disregarding Turkey, which has the longest coastline in the Eastern Mediterranean, and the Turkish Cypriots, who have equal rights over the natural resources of the Island of Cyprus, cannot succeed,” said the Turkish Foreign Ministry in a statement.

As well as carrying out controversial drilling projects, Turkey has stirred political tensions with a recent deal with Libya. In December, it signed an agreement with the UN-recognised Government of National Accord (GNA) in Libya, rewriting maritime boundaries in the region. This effectively created an exclusive economic zone from Turkey’s southern Mediterranean shore to Libya’s north-east coast – an area the pipeline would cross through.

The legality of this economic zone is questionable. “Nobody is going to recognise this meaningless document… not just because it’s invalid, but because there’s no equivalent legal authority on the Libyan side that can do so,” said Greek Prime Minister Kyriakos Mitsotakis. Israel warned the move could “jeopardise peace and stability in the area”, while EU leaders issued a statement in support of member states Greece and Cyprus.

But because of this deal, the fate of the Eastern Mediterranean pipeline deal is now tied to the crisis in Libya. “Any solution that entails the recognition of the GNA as the only legitimate government in Libya will increase the chances [that] the Libya-Turkey deal [will] impede the realisation of the Eastern [Mediterranean] pipeline,” said Mammadov. “Potential investors in the $7bn [€6.39bn] project will be certainly discouraged with the instability in the region.”

Number crunching
The Eastern Mediterranean pipeline will be the longest and deepest subsea development of its kind, but since the project was first proposed in 2012, experts have questioned its financial viability. Developing gas infrastructure requires multibillion-euro investments, the returns of which take years or even decades to materialise. Political risks do nothing to spur investor confidence.

With no sign of these risks diminishing, analysts question whether energy companies will invest the capital required to construct the pipeline. So far, little progress has been made in the growth of gas in the region, and the majority of gas fields in the Eastern Mediterranean remain largely undeveloped.

What’s more, the alternative energy market is becoming increasingly competitive. Europe’s gas prices are expected to drop throughout 2020, just as the Eastern Mediterranean pipeline should become operational. It will be difficult for Eastern Mediterranean gas to compete in this market, especially given that Gazprom confirmed in October 2018 that it could lower its prices to $4 (€3.66) per million British thermal units without a considerable financial loss.

The Eastern Mediterranean faces significant hurdles before it can become a major gas exporter, not least because Turkey continues to pursue an expansionist policy in the region. In recent months, it has made aggressive moves within Cypriot waters, including intercepting an Israeli ship that was carrying out a routine exploration mission. Provocative behaviour like this may make investors think twice before committing large sums to gas development in the Eastern Mediterranean.

For all the doubts surrounding the project, one thing is cause for celebration: the deal shows that there is political enthusiasm for closer energy ties between Greece, Israel and Cyprus. It follows on from the formation of the Eastern Mediterranean Gas Forum in 2019, which a number of nations joined in the hope of developing a regional gas market. In a region that has long been rife with territorial disputes, the cooperation that energy diplomacy has fostered could bring notable economic benefits.